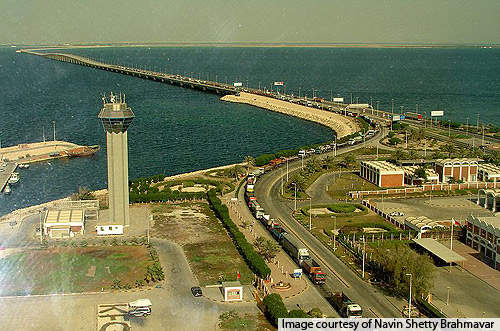 The King Fahd causeway is a 25km long causeway crossing the Gulf of Bahrain. 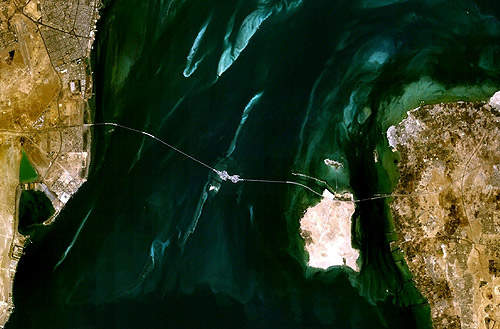 The 25km-long King Fahd causeway links the Kingdom of Bahrain with the Eastern region of the Kingdom of Saudi Arabia. Crossing the Gulf of Bahrain, in the Persian Gulf, the causeway starts in Saudi Arabia at Al-Aziziyyah, south of Alkhobar, and extends up to Al-Jasra, west of Manama in Bahrain. It comprises two segments, a longer bridge from Khobar to Nasan Island in Bahrain and a shorter stretch from Nasan Island to the main island of Bahrain.

The causeway was built by Dutch contractor Ballast Nedam and financed entirely by the Kingdom of Saudi Arabia and King Fahd Causeway Authority (KFCA) is the operator.

A $5m expansion to the causeway was announced in July 2010. The expansion aims to increase the departure and arrival lanes on both sides of the causeway.

The causeway is a four-lane road featuring two roadways. Each roadway is 11.6m wide and includes two lanes running in opposite directions. It features a curb for emergency parking.

There are five bridges, totalling 12.43km in length, along the route of the entire causeway. The first three bridges measure 934m, 2,034m and 5,194m in length and form part of the Saudi side. The Bahraini side of the causeway contains two bridges measuring 3,334m and 934m in length. The bridges are interconnected by islands and dams. Approximately 12.5km of the causeway has been constructed as a dam.

The causeway also comprises seven embankments extending 12.57km in length. A 660,000m² border station at embankment no. 4 is the largest among all. Designed as two connected islands, the border station includes two mosques, two 65m high tower restaurants, buildings of KFCA and other government directorates and two coastguard towers. The island on the west side is designated to Saudi Arabia while that on the east side is designated to Bahrain.

The expansion project is part of a larger SAR1.07bn ($284.8m) causeway development project plan that aims to increase the number of lanes dramatically. The project will involve the construction of two 400,000m² artificial islands, one on either side of the causeway.

Approximately SAR998m will be used for the construction of the islands, associated infrastructure, buildings and other facilities. A waiting yard with a capacity for 400 trucks will also be constructed at either end of the causeway.

The expansion will add seven new departure lanes and five new arrival lanes, bringing the total number of departure and arrival lanes to 17 and 18 respectively. A new commercial centre is currently being renovated on the Bahraini side. The centre will include a number of restaurants, coffee shops, a grocery shop, telephone stalls and a shop for the travelers to meet. It is expected to be completed by the first quarter of 2011.

A health centre to accommodate an emergency room and an ambulance is also under construction on the Bahrain side. A similar health centre will be constructed on the Saudi side.

“A $5m expansion to the King Fahd causeway was announced in July 2010.”

At the Bahraini entrance, a security checkpoint will be installed. Utilities including washrooms and mosques will also be expanded on both sides of the causeway as part of the project.

The expansion will increase the passenger handling capacity of the causeway to 100 million a year. The construction is expected to begin in 2012 with scheduled completion by December 2015.

The causeway was constructed between 1982 and 1986. It involved the installation of over 500 pre-stressed concrete cylinder piles beneath and along the causeway. The piles are 3.5m in diameter and have been installed and grouted into drilled sockets. In order to suit the geotechnical conditions, the length of the piles was changed from bent to bent.

Approximately 350,000m² of concrete was used along with 47,000t of reinforced steel. To avoid corrosion of the reinforced steel a blend of blast furnace, slag and portland cement was used. A low water to cement ratio was obtained using a high-range water reducing admixture. In the splash zone, the piles were coated with epoxy.

The dam construction involved use of five million tons of rock and broken stone and approximately ten million cubic feet of sand, extracted from the seabed.