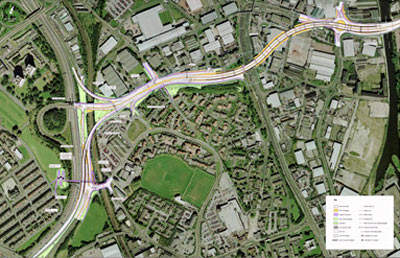 The extent of the route for Stage 7 of the Leeds Inner Ring Road. 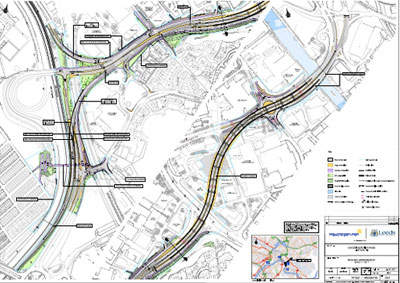 The Stage 7 plan as set down by Leeds County Council. 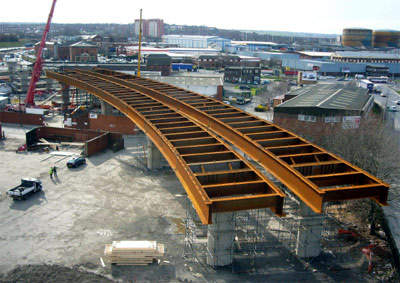 Work progressing on the deck of one of the bridges. 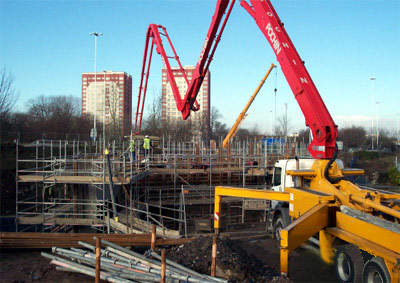 Steel beams being lifted into place. 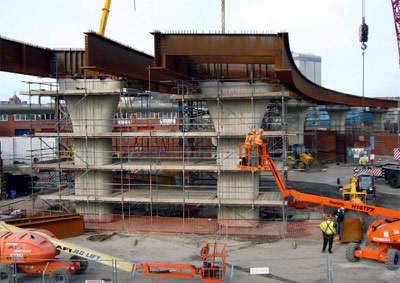 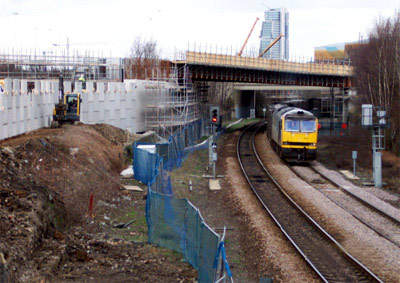 One of the three rail bridges with the concrete embankment.

The UK’s Leeds Inner Ring Road Stage 7 project (LIRR7) provides the final link to connect Stage 6 of the scheme (completed in 2000) to the M621 and the wider national motorway network.

The design and construction of the project was initiated by Leeds City Council via a two-phase process involving an early contractor involvement (ECI) contract that was awarded to Alfred McAlpine in March 2005.

Phase I, which commenced in April 2005, involved detailed design by a joint Leeds City Council / Mouchel Parkman team brought together as part of a wider partnership agreement.

“A principal feature of the Leeds Inner Ring Road will be a 600m viaduct over the local road network.”

The Leeds Inner Ring Road is part motorway and part A road. Most of it is designated the A58(M) – a motorway section of the A58 road – while a short section is the A64(M), part of the A64 road. The motorway section is 2.5m (3.8km) long and is subject to a 40mph speed limit throughout. The remainder of the route is the A61.

The route for Stage 7 runs from South Accommodation Road in Hunslet and connects with Junction 4 of the M621. It comprises the construction of dual two and three-lane carriageways, through a previously industrial area, with slip road links to the M621.

The principal features of the scheme are a 600m long viaduct over the existing local road network, and three bridges over the Leeds-to-Castleford railway line.

The Leeds Inner Ring Road Stage 7 scheme assists in the removal of remaining through traffic from the Leeds central area, and in conjunction with the M621 providing a continuous circulatory route around the city centre.

The scheme has improved travel times across the city and relieved congestion in the Hunslet and Holbeck areas as well as the city centre. The scheme has also improved access to the Aire Valley Leeds regeneration area, following the completion of the East Leeds Link Road in 2008.

It also allows the full benefits derived from city centre traffic innovations of the past 15 years, including the city centre loop, Public Transport Box and improvements to pedestrian areas and public space refurbishment. The main contractor on this scheme was Pierse Contracting.

The positioning of steel beams on the new Hunslet Viaduct remained on schedule (January 2007) and can be seen from South Accommodation Road and Hunslet Road. These beams are 120ft long and 6ft deep, and were lifted into position by large cranes. The beams were made in weathering steel, which does not need to be painted and the colour of the beams will soften over time.

The use of weathering steel enabled Leeds City Council to make considerable savings on maintenance costs over the life of the viaduct by not having to repaint the structure.

“The Stage 7 scheme has improved travel times across the city of Leeds.”

All of the foundations for the viaduct piers were built and the two approach ramps were raised above ground level.

Two large sewer diversions, together with three major gas main diversions, have been completed along the route in order to avoid the foundations of the bridge structures along the A61 on South Accommodation Road, Hunslet Distributor and Moor Road.

Stage 7 included a new footbridge over the M621 and the Inner Ring Road. This bridge lies between Church Street-Hillidge Road and Burton Row.

The Leeds Inner Ring Road Stage 7 project is technically complex and involved substantial engineering works. One 500m section was carried out above ground level on a major new viaduct, spanning Hunslet Road from the West of the River and on to the Hunslet Distributor Road.