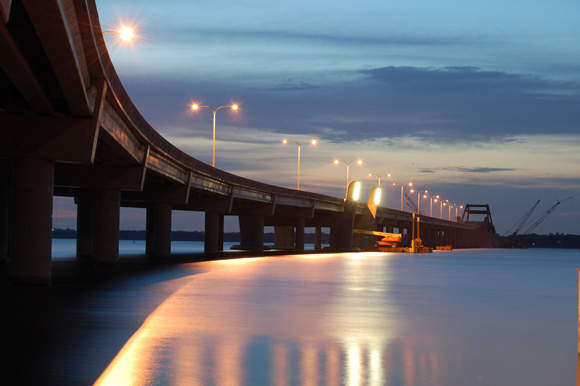 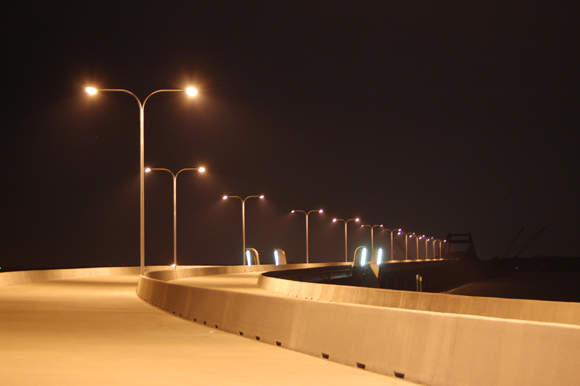 Light towers flank either side of the signature arch. 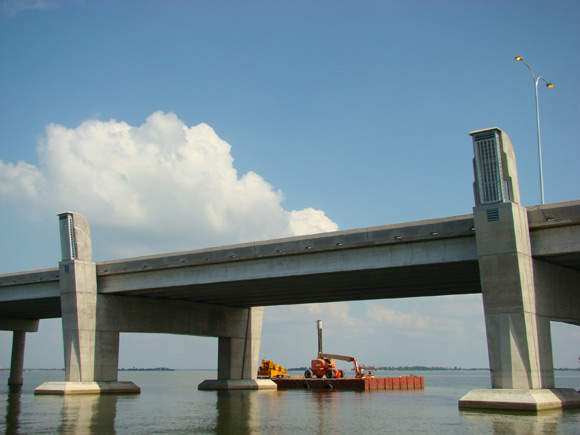 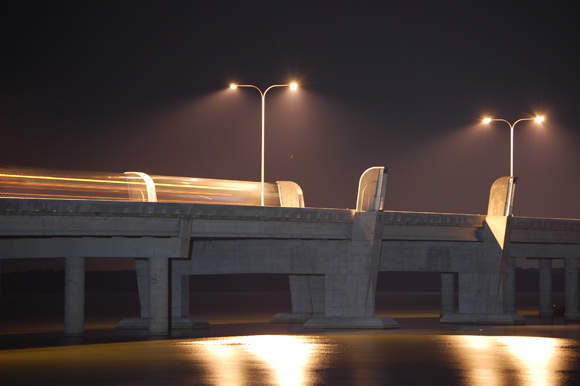 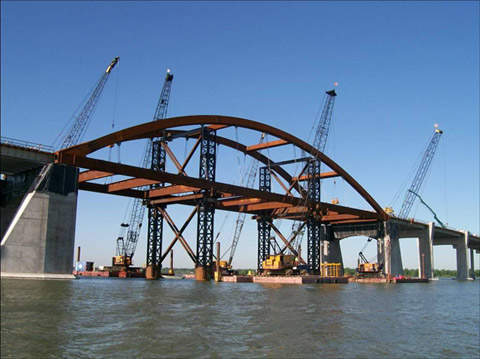 Texas and creates an east-west connection across the region. The toll bridge is a part of the Lewisville Lake Corridor.

The LLTB is the second section of the $220m Lewisville Lake corridor project, which is currently underway.

Construction of the $122m toll bridge began in 2006 and was completed in June 2009. The bridge was opened to traffic on 1 August 2009 following a community-led 5K run and family fun walk entitled ‘Run the Lewisville Lake Toll Bridge’.

The project mainly focuses on reducing the travel time for commuters between Denton County and Lake Dallas.

It provides faster access to points throughout the region. In addition, the LLTB also provides a visually unique landmark.

Jensen Construction Company, a heavy and highway construction firm based in Midwestern, was awarded a $93m contract for construction of the bridge.

“NTTA was responsible for the design and construction of the 1.7 mile toll bridge and a 0.3 mile flowage easement bridge.”

Jensen is the oldest operating subsidiary of The Rasmussen Group and worked on projects over major rivers throughout the central US.

Work on the corridor includes installation of roadway striping, signage and toll equipment and work on the deck, railing, drainage and electric systems. Work related to the development of approach roads to the toll bridge will also be taken up.

It mainly includes a lake bridge that crosses the Lewisville Lake, a flowage easement bridge and an electronic toll collection system.

The four-lane bridge, which involves two lanes in each direction, has a lighted, weathering steel 360ft arch near the centre of the bridge and a 8ft thick bridge deck structure with 52ft below clearance. Light towers flank either side of the signature arch.

Tubular LED lamps are fixed to the arch to enhance the nautical theme.

The arch with lighting is basically designed to provide motorists, local residents and boaters with an easily recognisable landmark in southern Denton County.

The all-electronic toll collection (all-ETC) system, installed at the bridge is used to collect $1 for TollTag customers and $1.50 for ZipCash drivers.

In 1949, the US Army Corps of Engineers constructed the Lewisville Lake. The Garza Dam on Lake Dallas was, then, breached to combine the waters of both the lakes. This has resulted in the closure of the highway that connects the city of Lake Dallas with Little Elm.

In 2001, NTTA was contacted by Denton County for exploring the possibilities of bridge construction.

In August 2004, the board of directors of NTTA had approved the design of the toll bridge and during 2006 a contract for constructing the bridge was awarded.

LLTB’s official ground breaking was done on 31 January 2007 and half of the construction work was completed by May 2008.

The arch structure’s first corner piece was installed on 22 December 2008, while the fix of cables and arch was completed by May 2009.

The work on corridor substructures that include foundations and columns, and the construction of flowage easement bridge was completed while deck placement for the lake bridge is yet to be done.

NTTA was responsible for the design and construction of the 1.7 mile toll bridge and a 0.3 mile flowage easement bridge. It also operates both the bridges.

The NTTA has funded the toll bridge while the cities along the corridor, Denton County and Texas Department of Transportation (TxDOT) funded improvements to the roadways approaching the bridge.