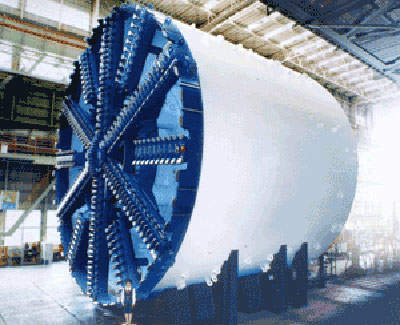 Seven tunnel boring machines will be used in the Madrid Calle 30 project. 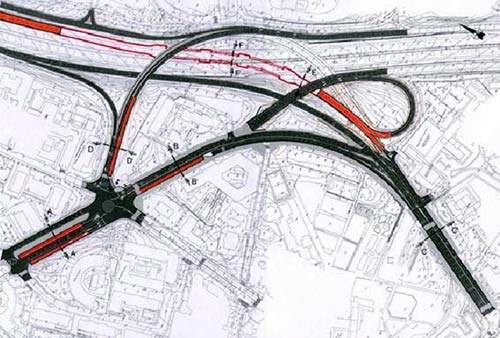 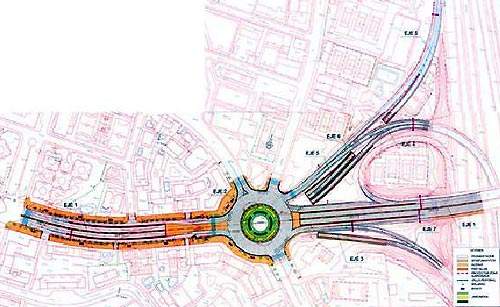 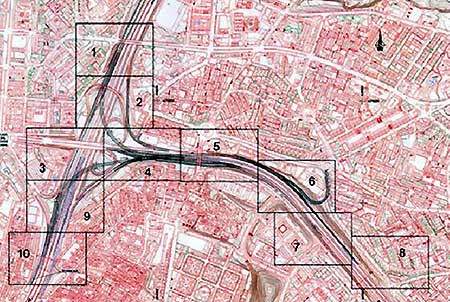 Tunnel dimensions on the south by-pass.

The Madrid M30 motorway, the inner ring road of the city, has been at the centre of a major urban renewal project where the motorway has been redirected underground. In 2004 it was determined that the M30 was a ‘barrier’ to movement in the urban areas it ran through.

Despite its necessity as part of the road infrastructure of Madrid it caused much pollution to the air and also the Manzanares River which it ran close to.

The Madrid Calle 30 project was undertaken to refurbish the road (which is badly in need of structural work) and reroute major sections of it through tunnels under the city areas with which it is associated. This now allows the surface areas that used to be asphalt paved to be redeveloped into green park areas, footpaths, cycle paths and new affordable housing.

While the Madrid City Council has tried to extol the virtues of the environmental benefits of the project, many environmental activists pointed out that although large sections of the M30 will be routed underground, the amount of traffic using it will increase and therefore pollution problems are not just going to go away. The council has countered this by releasing figures of the projected reduction in emissions. It says that between 2007 and 2037 the reduction will increase from 35,000t to 64,800t.

“The objectives of the project included an increase in the capacity of the M30 and regeneration and clean-up of the Manzanares River.”

The objectives of the project included an increase in the capacity of the M30, recovery of the environmental areas surrounding the old sections of the M30, and regeneration and clean-up of the Manzanares River. There has also been an improvement to the radial connections with surrounding secondary roads in Madrid that reduce intra-city travel times significantly.

The new sections of road construction totalled 99km, 56km of which is in tunnels. Construction started in September 2004 and was complete by the second quarter of 2007. The total project budget was estimated at €3.9bn.

The motorway reconstruction took place in sections and was divided into 15 separate projects and four regions – north, south, east and west.

The south bypass is an 8,344m, three-lane infrastructure divided into two tunnels, of which 7,212m was built by 15m-diameter TBMs and 632m by cut-and-cover tunnel method. Sinking of the shafts for the TBMs started in August 2004 and construction was completed within the contract of 30 months. Both tunnels, one in each direction, allow drivers to avoid the A-4 intersection.

Sacyr Vallehermoso improved the connection to the A-3, at a cost of €187m, in 24 months. This is a 4.8km section where 1.4km was in cut-and-cover tunnel and 430m in conventional tunnel.

Corsan-Corviam improved the La Paloma Interchange for €56m. The 5,508m section required a 1,546m section to be excavated and constructed in cut-and-cover and 175m using conventional means.

A joint venture set up by Construcciones Sando and Ploder constructed the connections to Costa Rica and Jose Maria Soler in 14 months at a cost of €27m. This section is 2,078m in length and included 892m of cut-and-cover tunnel.

Aldesa Construcciones was selected to refurbish and strengthen the connection with Avenida de América in 14.5 months for €23m.

Two underpasses were also required to link up the N-II with the M-30 south and the M-30 north with the N-II.

“The HI-FOG system was selected to protect five out of seven sections of the M30 tunnel project equipped with fire protection systems.”

Design work on the equipment was performed by MHI and manufacturing was carried out by Felguera Construcciones Mecánicas SA. The machine fabrication was completed in July 2005.

The EPB tunnelling machine was used for construction of the south tunnel of the south bypass on the Madrid M30. This was of course only one of the seven machines used to carry out the tunnelling excavation for the 15 projects of Madrid Calle 30.

Six more machines were used with various different requirements. Most were 15m cutting diameterweighing 4,000t and built by Herrenecht of Germany, but one was configured to cut a dual-lane tunnel 12m in diameter.

All of the machines used an earth pressure balance shield system, since most of the excavation was in soft ground (little hard rock). The segment erectors were configured to line tunnels with 70cm-thick segments of concrete although some sections were double lined with a second segmental ring to act as a safeguard against fire – this required a second segment erector on the TBM.

The inner diameter of the tunnels was 13.45m after lining. Flygt supplied pumps for use behind the tunnel boring machine shields on the project (two pumps for water and three more to pump lubricant foam to the cutting heads).

The HI-FOG system developed by Marioff was selected to protect five out of seven sections of the M30 tunnel project equipped with fire protection systems. Marioff was given the contract by Dragados, one of the major M30 contractors. The HI-FOG water mist system is designed to suppress fire coming from a heavy goods vehicle (this is where the risk is perceived).