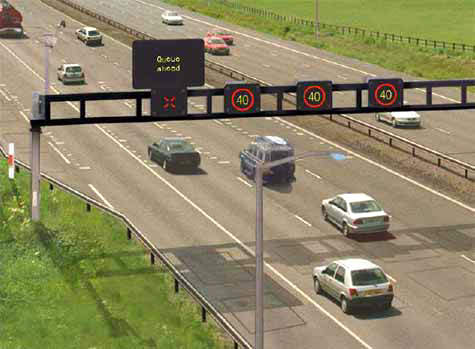 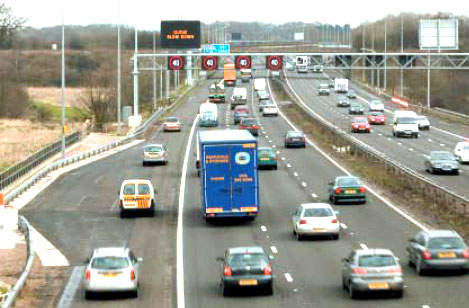 Emergency Refuge Areas (ERA) at frequent intervals along the hard shoulder will be equipped with emergency phones and CCTV cameras. 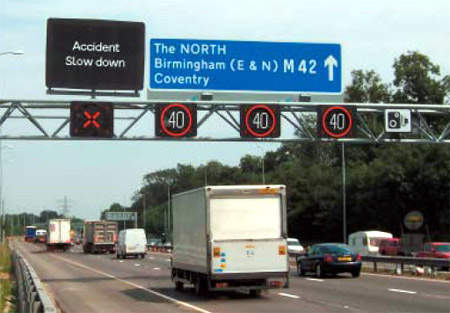 ATM signs will relay information to motorists to open and close lanes and control speeds to prevent flow breakdown. 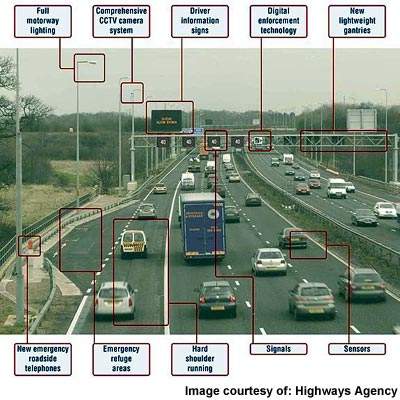 The M42 is full of new technologies which when used together help to avoid congestion and keep traffic flowing safely. 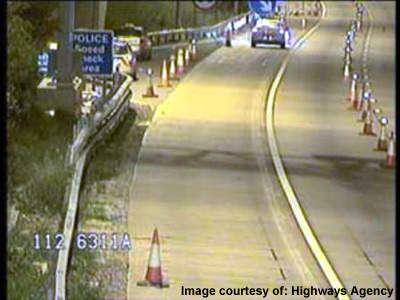 The automatic number plate recognition cameras can be used to track vehicles and determine where the greatest build up of traffic will be. 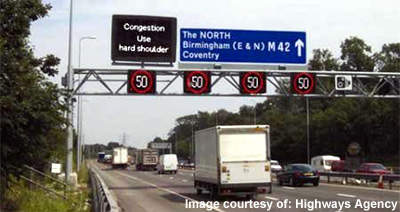 The UK Highways Agency is currently implementing an Active Traffic Management (ATM) system as a pilot scheme over the 17km stretch between junctions 3a and 7 of the M42 (28% of the traffic leaves the M42 at junction 7 to join the M6).

This test-bed section of the M42 has extremely variable traffic flows, as it functions as part of a cross-country north-east to south-west route; an orbital route for Birmingham; and an access road to Birmingham Airport, the NEC, and business parks and residential areas. It handles over 120,000 vehicles per day.

The section is a three-lane motorway (six lanes plus full hard shoulders). This scheme combines new technologies with well-known motorway traffic management techniques. These include mandatory variable speed limits (such as those in use on the M25), enhanced driver information signs and a new congestion and incident management system.

The system allows operators to open and close any lane on the motorway to traffic in order to help manage congestion at busy times of the day or traffic build-up due to an incident. This will eventually include using the hard shoulder as a running lane between junctions under controlled conditions.

The M42 became a controlled motorway on 29 November 2005. This means that mandatory variable speed limits came into use.

The control system has been future proofed to allow expansion, both in terms of additional functionality, such as access management, and full-scale national deployment.

The system will have the ability to generate a historical log of activities for later analysis and review, allowing scenarios to be fine-tuned during operation of the ATM.

Reasons for the new pilot scheme

The UK Government pledged £180bn over ten years as part of its ‘Transport 2010’ strategy to modernise transport infrastructure in the UK with spending on public transport, rail and roads. As part of this scheme the UK Highways Agency was given the task of developing as a network operator by implementing traffic management, network control and other measures to:

ATM is the key to tackling congestion through the introduction of new technology to make the best use of the existing road space while maintaining and hopefully improving current safety standards. The system will include:

Vehicle detection ‘Loops’ (MIDAS traffic sensors) set into the road surface beneath each lane at regular intervals (visible as dark rectangular markings), and a network of CCTV cameras to detect traffic speed and density. The monitoring loops sense how much traffic there is. Depending on the volume of traffic and the duration of the congestion, a computer calculates the optimum speed to keep traffic moving. This speed is then displayed on the signals on the gantry overhead.

“ATM is the key to tackling congestion through the introduction of new technology to make the best use of the existing road space.”

41 lay-bys or Emergency Refuge Areas (ERA) situated at frequent intervals along the hard shoulder, with space for several vehicles and equipped with emergency phones and CCTV cameras. These are required if the hard shoulder is to be used as a running lane for traffic.

An off-site control room with computer systems linking all the above equipment.

Consultation on the work was carried out by Cambridge Consultants Ltd and Mouchel PLC. The construction work was started in spring 2003. By spring 2005 the monitoring loops and variable speed limit equipment were operational. The hard shoulder running was operational by Autumn 2006, and lane enforcement and access management was also operational by late 2006.

Serco won the contract to develop and maintain the new ATM control system. Serco’s Intelligent Transport Systems (ITS) team undertook the installation and development of the system over an 18-month period from 2003. Serco was also awarded a three-year maintenance contract for the system.

Gifford were responsible for the gantry design. The system has required the services of many contractors and a full list is given in the specifications table.

“Drivers polled about the safety of using the hard shoulder showed that 84% felt it was safe.”

Following the success of the M42 ATM, Ruth Kelly, the Transport Secretary, announced in October 2007 that the same scheme would be rolled out to the rest of the motorway network around Birmingham (£150m project) and that a feasibility study would be commissioned on implementation to the national network in an effort to beat congestion.

In the first six months of the full M42 trial, the use of the hard shoulder in peak periods seemed to be a success, with average journey times falling by more than a quarter on the northbound carriageway. In addition, Highway Agency statistics showed overall fuel consumption reduced by 4% and vehicle emissions fell by up to 10%. Drivers polled about the safety of using the hard shoulder showed that 84% felt it was safe.

The Department for Transport has now commissioned a major study to examine the costs and technical feasibility of extending this type of traffic management to other areas of the network.