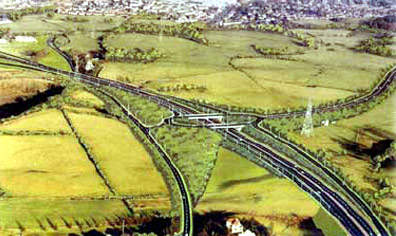 Artists impression of part of the finished road system – the M77 / GSO will improve an important part of Scotland's strategic road network. 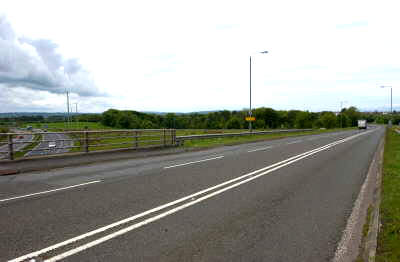 The M77 completed extension will run south from Malletsheugh, near Newton Mearns, to Fenwick in East Ayrshire. 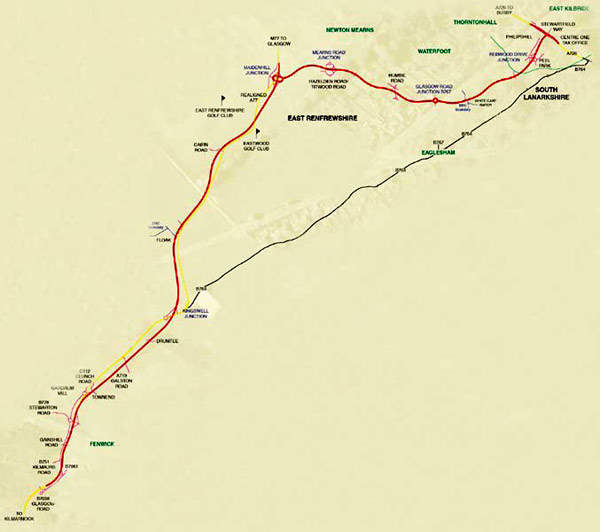 A dual two-lane carriageway will connect the M77 / A77 improving links between the Lanarkshire, Ayrshire and Renfrewshire areas, and bypassing beleaguered communities along the A726 and B764 corridors. 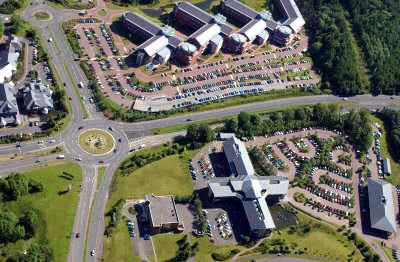 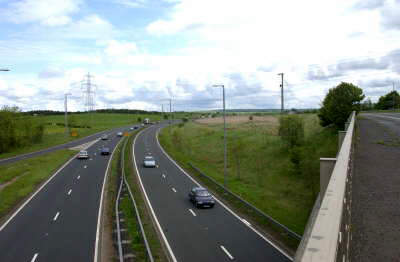 The Glasgow Southern Orbital (GSO) will be one of the largest road construction projects undertaken in mainland Scotland in recent times.

The extension of the M77 motorway with the Glasgow Southern Orbital (GSO) is one of the largest road construction projects undertaken in mainland Scotland in recent times.

The £132 million project is being undertaken as a Design, Build, Finance and Operate (DBFO) concern and will improve an important part of the countries strategic road network, which is essential to boosting economic growth, particularly in Ayrshire and the south-west region of the country.

It will also provide direct links with other major roads serving the central belt, the south of Scotland and the ferry routes to Ireland. The 15.2km (9.4-mile) M77 extension (£79 million) runs south from Malletsheugh, near Newton Mearns, to Fenwick in East Ayrshire and will replace the present dangerous and sub-standard A77 trunk road (27 people killed and 105 injured during the past 10 years) with a dual two-lane motorway with a 70mph speed limit.

Upon completion of the new motorway the existing A77 between Malletsheugh and Fenwick will become a road solely for local traffic with suitable speed limits imposed and an upgrade of facilities for cyclists and pedestrians.

The GSO will provide a dual two-lane carriageway connecting the M77 / A77 at the new Maidenhill junction to the A726 at Philipshill, East Kilbride, thereby improving links between the Lanarkshire, Ayrshire and Renfrewshire areas, and also bypassing beleaguered communities along the A726 and B764 corridors of their significant volumes of heavy through traffic.

At Philipshill the A726 will be upgraded to provide a new elevated section of dual two-lane carriageway with connecting slip roads to cater for traffic travelling between East Kilbride and Busby, Glasgow and Paisley. Clarkston and Eaglesham are both conservation village communities, who have endured heavy traffic for many years and will significantly benefit from the GSO. It is intended to convert the B764 Eaglesham Moor road into a local access road with cycling and pedestrian facilities. The roads were open for pedestrian access and inspection on 24th April 2005.

Macquarie Bank advised the M77 / GSO road project on financial matters. The project was able to achieve financial close in just five months during 2003 following the appointment of the Connect consortium as the preferred bidder. The closure of the £132 million M77 / GSO DBFO road in Scotland was announced in May 2003. This followed the launch of a £132 million public bond issue by Connect, the Balfour Beatty / Atkins consortium in April 2003 as the finance initiative.

In addition they will be responsible for landscape management and grass cutting, management and liaison of winter maintenance gritting and snow ploughing operations in conjunction with the neighbouring authorities; sweeping, litter picking, sign
cleaning and gully emptying.

CONSTRUCTION DETAILS OF THE ROADS

The new section of the M77 motorway consists of 15.2km of new dual two-lane

7.3m carriageway with 3.3m hard shoulders and a central reserve, the verge will be 1.5m wide. The junctions are situated at Maidenhill, Kingswell and Fenwick. The GSO is 9.2km of new and 0.8km of improved dual two-lane all-purpose road. The road consists of 7.3m carriageways with 1m hard-strips and a central reserve. The verge width including hard strip is 3.5m. The junctions are at Maidenhill, Mearns Road, B767 Glasgow Road, Redwood Drive and the A726 at Philipshill.

The integration of the new roads into the lowland and upland landscapes was a fundamental element in the design of the route. To alleviate the impacts, the design has incorporated environmental and landscaping mitigation measures as well as several environmental benefits and enhancements these have included:

Hedge planting, stonewalling and fencing has helped to integrate the new boundaries of the roads into the network of fields and other properties.