Forth Estuary Transport Authority (FETA), with grant assistance from the Scottish Executive

Three bridges and one underpass 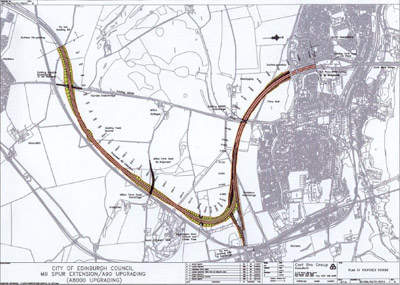 The plan of the route for the new M9 spur. 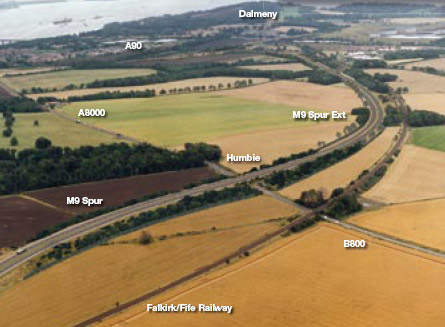 The layout for the route of the new M9 spur, which will relieve the nearby A8000. 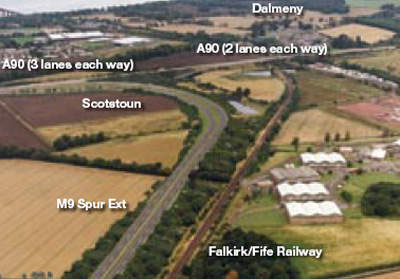 How the new scheme will wind its way through the nearby villages. 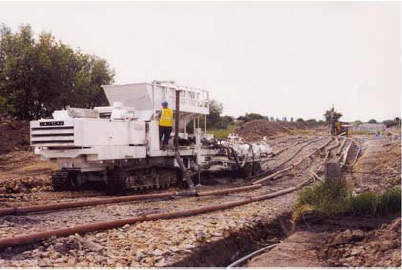 Construction work on the mine workings prior to the works beginning. 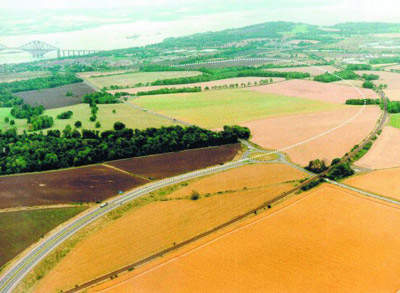 The A8000 route with the Forth Road Bridge in the background. 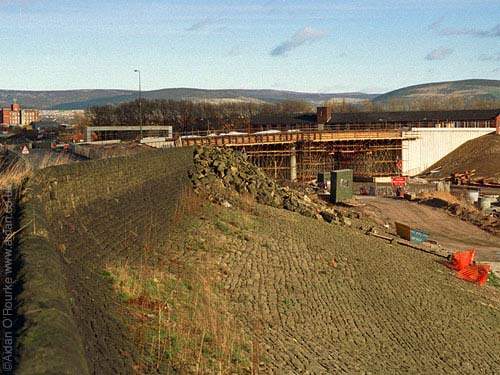 Work beginning on some of the embankments for the M9 spur extension road.

In May 2006 construction began on a new fast motorway link to take traffic between the M9 spur, which receives traffic from both the M9, the M8 and the Forth Road Bridge. The project has filled the ‘missing link’ in the road network of southeastern Scotland.

The scheme effectively transfers traffic from the over-capacity A8000 making journeys quicker and relieving the local communities of South Queensferry and Kirkliston of much of their traffic and congestion.

The City of Edinburgh Council, as the local roads authority, has been developing the scheme since 2000 and is now performing the role of project manager.

The project was funded by the Forth Estuary Transport Authority (FETA), with grant assistance from the Scottish Executive.

The project also falls within FETA’s broader remit to develop, support and fund schemes to reduce congestion on the Forth Road Bridge. Planning application was made in 2002 and the scheme was passed in mid-2004. The project has cost approximately £40m to complete.

Work on the project was started by Morrison Construction Services Ltd (lowest bid tendered) in May 2006 and was completed in September 2007.

“The Scotstoun underpass was completed in the fourth quarter of 2006 and the project was opened to road users in September 2007.”

Goals for the summer of 2006 included the introduction of the A90 traffic management program, putting the M9 contraflow in place and starting the A90 resurfacing programme.

In the third quarter of 2006 work was started for the removal of Humbie Roundabout and also the installation of 107 23.2m long beams at the Scotstoun underpass.

The Scotstoun underpass was completed in the fourth quarter of 2006 and the project was opened to road users in September 2007.

The other three bidders for the project contract were: Balfour Beatty Civil Engineering Ltd; Morgan Est plc and Mowlem plc.

Extent of the project

The M9 spur was extended to meet a new interchange with the existing A90 at Scotstoun. This involved the construction of 3km of motorway standard grade two-lane dual carriageway, three bridges and one underpass.

Through the removal of the Humbie roundabout and carrying the motorway on a bridge over the local road, the existing connection from the M9 Spur to the A8000 was taken out of service. The A8000 remained open just as a local road between Kirkliston and South Queensferry. The new Scotstoun Interchange layout was designed to take the A90 westbound carriageway from Edinburgh under the motorway extension.

Traffic on the M9 spur heading towards the bridge has no connection to the City of Edinburgh at the Scotstoun Interchange. The A90 was widened between the Scotstoun Interchange and the Forth Road Bridge to form a more serviceable three-lane dual carriageway. Traffic from the Forth Road Bridge can travel to the city of Edinburgh via the A90 or connect to the central Scotland motorway network and a choice of other strategic routes via the M9 spur.

Kirkliston has installed traffic-calming measures after the project completion to prevent ‘rat running’ and to reduce the number of heavy goods vehicles travelling through the village. In addition, there is a proposal to construct a new safe cycleway between South Queensferry and Kirkliston adjacent to the A8000.

The project was not started properly until 2006 due to the presence of old shale mine workings beneath a section of the proposed route. These had to be stabilised and remediated prior to the main project starting at a cost of £6.9m. The engineers for the project were Scott Wilson Scotland Ltd and the contractors were Forkers Ltd. The mine remediation work started in June 2005 and was completed in March 2006.

“The M9 spur will be extended to meet a new interchange with the existing A90 at Scotstoun.”

The scope of the work required the treatment of oil shale workings beneath part of the proposed M9 spur road scheme on the approach to the Forth Road Bridge.

Multiple seams of oil shale have historically been extensively worked beneath this part of the site as confirmed by a series of old mine plans.

The seams are each up to 2.6m thick, steeply dipping across the site from outcrop to 60m. A mixture of broken ground, large voids and open workings needed to be treated.

The design of the M9 spur scheme included the construction of embankments and bridge structures at this location which produced high ground loadings, and therefore the specification for the consolidation of the mine workings was developed to ensure the complete treatment of each seam and areas of migrated collapse.