Bridge is a duplicate of the Mangere Bridge opened in 1984 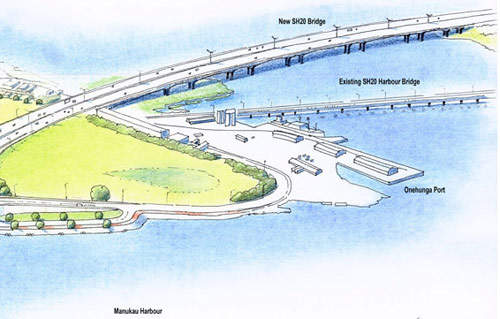 A sketch of the planned project, which aims to relieve congestion through Auckland. 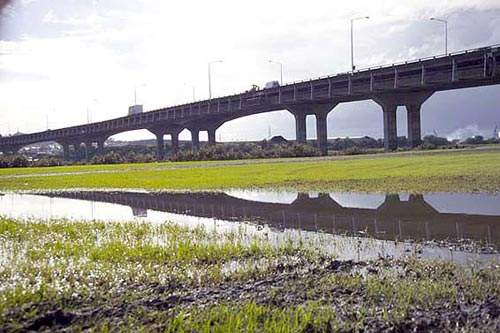 The Manukau harbour already has one existing motorway bridge, opened in 1984. 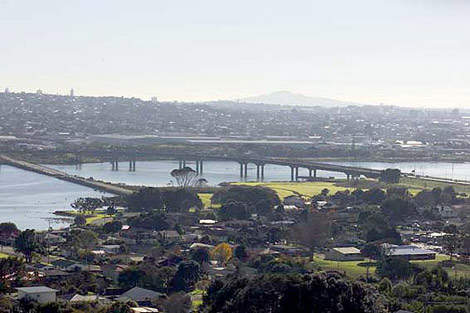 A duplicate bridge will now be built to increase capacity and improve efficiency and safety across the harbour. 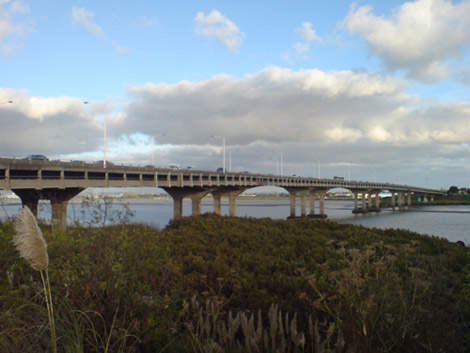 The two bridges will carry a total of eight lanes across the harbour (four in each direction). 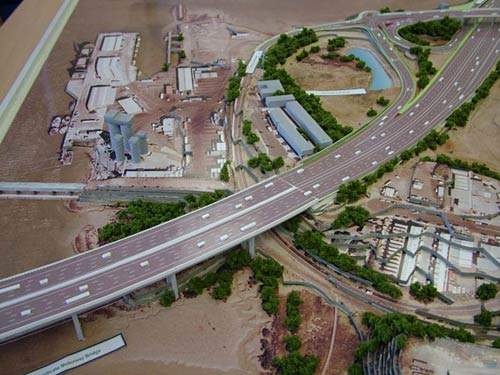 At this stage the bridge project will continue but further modifications involving the Gloucester Park Interchange are under consideration. 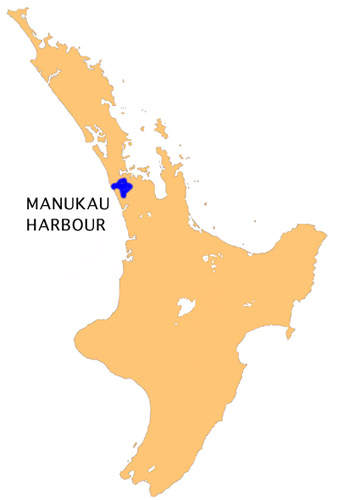 The Manukau Harbour is on the north island in Auckland.

The Manukau Harbour Bridge (crossing), opened in July 2010, is one of the key sections of the new 48km Western Ring Route motorway bypass in Auckland, which bypasses the Central Business District of the city. The aim of the project was to relieve congestion through the city, to make travel times shorter and more predictable and allow more room for bus lanes.

The original harbour crossing, also known as the Mangere Bridge, was opened in 1983. The new bridge was built to duplicate this crossing to the east and allow the original bridge to take traffic one way and the new bridge to transport traffic the other way across the harbour. The aims are:

The project has been scheduled for completion by 2011 with construction completed in time for the Rugby World Cup, provided that funds are made available.

The project was completed seven months ahead of the original schedule. Construction was started in February 2008 and completed in early second half of 2010. The project required an investment of $182m.

The project was the culmination of a series of investigations carried out over a period of more than ten years. In 2002 Transit completed a study that identified the best approach to provide more capacity at the Manukau Harbour Crossing on SH20.

The options considered were:

The study concluded that building an additional motorway bridge next to the existing bridge is the best option, providing eight lanes across the harbour with bus shoulder lanes.

The project involved the duplication of the Manukau Harbour Bridge to add extra lanes between the Mt Roskill Extension in Hillsborough and Walmsley Road in Mangere. This includes bus priority lanes and a dedicated pedestrian and cycle bridge.

“The project involved the duplication of the Manukau Harbour Bridge to add extra lanes between the Mt Roskill Extension in Hillsborough and Walmsley Road in Mangere.”

The bridge project has allowed the continuation of the SH20 through route (relieving congestion), an arterial route from the city to the airport and a local community connection between Onehunga (Neilson St) and Mangere Bridge. The project has widened the SH20 between Queenstown Road and Walmsley Road interchanges from four lanes to six lanes, with bus priority on shoulder lanes, and from four lanes to eight lanes between Rimu Road and Gloucester Park Interchanges, across the harbour.

The existing Mangere Bridge was duplicated to the east so that four traffic lanes and a shoulder lane for bus priority will be provided in each direction. The Rimu Road/Mahunga Drive Bridge was replaced to allow motorway widening. Further south at Tararata Creek, a new off ramp-bridge and widened motorway bridge was required. At the Queenstown Road Bridge, additional retaining walls at abutments were required. The Beachcroft Avenue and Hastie Avenue footbridges were also replaced to allow motorway widening.

After the council hearings in August 2007 it was confirmed that Transit New Zealand had decided to proceed with the main Manukau Harbour Crossing Project works to add a duplicate bridge and additional lanes on SH20 between Queenstown Road and Walmsley Street within the existing motorway designation.

“Transit New Zealand wanted to move ahead and provide enhanced access on SH20 between Auckland International Airport and Auckland City.”

Transit New Zealand wanted to move ahead and provide enhanced access on SH20 between Auckland International Airport and Auckland City for both vehicles and public transport as soon as possible.

The form and location of the Gloucester Park Interchange were resolved through further discussions between Transit and key regional and community stakeholders, including Auckland City Council, the Auckland Regional Council and the Onehunga Inter Agency Working Group.

In order to ease congestion along the Onehunga Harbour Drive and provide a more logical link with the SH20 motorway, the interchange was reworked into a quarter-diamond design.

The project was undertaken by the MHX Alliance which comprised of NZ Transport Agency, Fletcher Construction, Beca Infrastructure and Higgins Contractors.

Tonkin and Taylor was contracted to provide geotechnical investigations, interpretive reporting and specimen design development for the project.