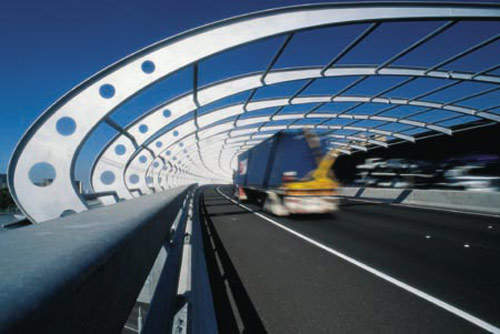 City Link connects the major routes between the airport, the port and the industrial centres. 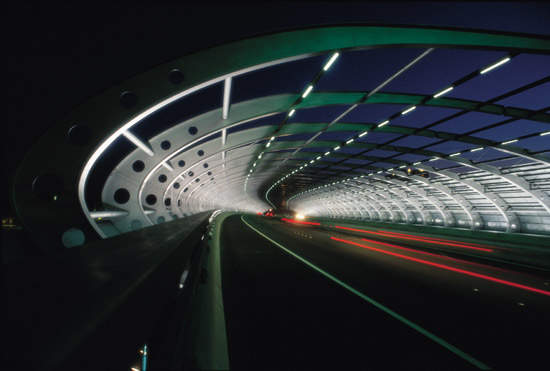 The Southern Link has brought two new three-lane tunnels beneath the Yarra river. 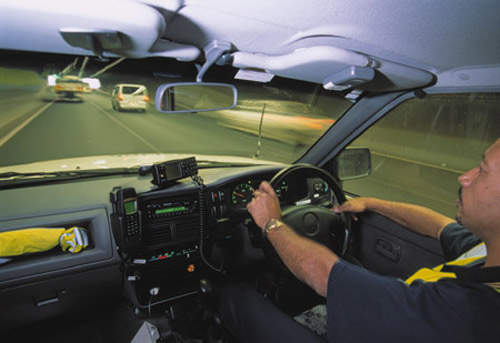 One of the key objectives of City Link was increased movement of traffic around the central administrative district. 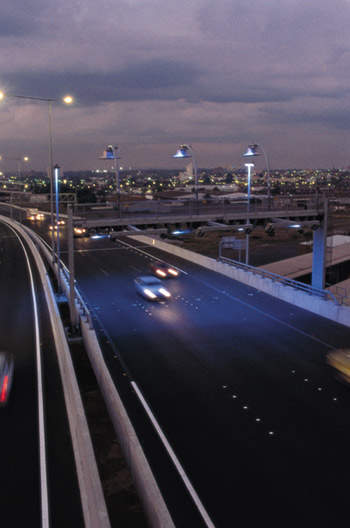 Electronic tolling means drivers do not have to stop or slow down to pay tolls, ensuring a steady flow of traffic. 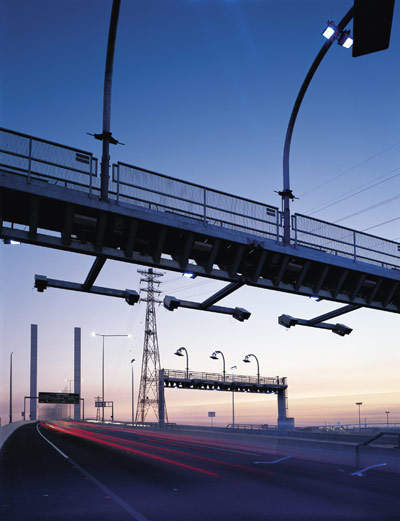 When passing through a toll zone, the vehicle's e-TAG is detected by a scanner mounted on a gantry above the road and the identifying number is recorded.

City Link is a privately operated electronic toll road situated in the centre of Melbourne in Australia. This massive integrated development, which cost approximately A$2 billion, began construction in May 1996 and opened in late 2000. It joined together three of the city’s freeways, creating a 22km expressway linking the major routes between Melbourne Airport, the port and the industrial centres in the south east.

The Western Link comprises an upgrade to the Tullamarine Freeway between Bulla Road and Flemington Road (now eight lanes), a six-lane elevated road through West Melbourne and a connecting bridge over the Yarra river, Melbourne’s central waterway, to the West Gate Freeway.

The Southern Link comprises two three-lane tunnels beneath the Yarra (3.4km and 1.6km long) and an upgrade to the previous freeway (now five and six lanes) between the city and the city end of the Monash Freeway, near Toorak Road.

The City Link project was intended to achieve a range of social, economic and environmental benefits, including facilitating traffic movement around the central administrative district (CAD), improving vehicle access to the CAD, as well as the port, airport and rail facilities, and enhancing the environment around the Yarra, the Botanic Gardens, the Kings Domain and adjacent sporting and entertainment precincts.

The project began in 1992 when the Australian Labour Government invited businesses interested in building, owning and operating the City Link to submit a bid. In July 1994 the new coalition Government confirmed that the project would go ahead and in May 1995 Transurban was selected to design, construct, own and operate the facility. It was agreed that the Concession period would be 34 years, after which time Transurban would hand it over to the Government.

The design and construction of City Link was undertaken by Transfield-Obayashi Joint Venture (TOJV), a joint venture between Transfield and the Japanese Obayashi Corporation, under contract to Transurban.

TOJV in turn outsourced the design and construction of the Western Link to Baulderstone Hornibrook Engineering and the supply of the electronic tolling system to Translink Systems, a company jointly owned by Transfield and Transroute of France.

City Link is one of the world’s first automated, fully electronic toll roads, featuring a cashless electronic tolling system with no toll plazas, toll booths or coin chutes. City Link and the Exhibition Street Extension contain eight designated toll zones where a vehicle’s driver or owner incurs a toll for use of the roadway.

Electronic tolling allows drivers to use City Link without slowing or stopping to pay tolls and helps to maintain a steady flow of traffic on the expressway.

City Link users are required to register with the Link operator, CityLink Melbourne, either by opening a toll account or by buying a DayPass. Those who open an account will receive a small wireless device known as an e-TAG to install on the vehicle’s windscreen.

Each e-TAG has a unique number stored in its electronic memory. The e-TAG does not contain the vehicle’s licence plate number, the driver’s name and address or other personal details.

When a vehicle carrying an e-TAG passes through a toll zone, the e-TAG is detected by a scanner mounted on a gantry above the roadway and the identifying number is recorded. This number is linked to the driver’s toll account in the central tolling computer system located in South Melbourne.

The administration of the tolling system is the responsibility of City Link Melbourne. Account holders are obliged to maintain sufficient funds in their account to cover the cost of their trips on City Link. These tolls can be paid by cash, cheque, credit card, Bpay or direct debit.

Nearly 100 LPR imaging and processing units operate on special gantries along City Link. The system captures an image of each vehicle in real time at speeds of up to 150km/h.

The LPR works by triggering a camera which takes a picture of each vehicle’s front license plate. When a passing vehicle fails to properly display the tag, advanced image processing comes into play.

The LPR also benefits users of the City Link DayPass. Users of the DayPass phone the service and provide their vehicle license plate numbers and vehicle class.

When a DayPass vehicle drives under a toll gantry, it sets off the LPR and an image of the vehicle’s license plate is captured and read. The system then verifies the plate number against the DayPass list. If the vehicle’s license plate appears on the list, no action is taken. If the number is missing from the list, the relevant authorities are notified.

Since opening in late 2000 the number of motorists using the City Link toll road has increased at a rapid rate. By June 2003 City Link had over 650,000 customer accounts, plus a million infrequent users without accounts. In total, motorists were using the toll road for more than 700,000 transactions a day. These figures are expected to increase further in the future.