Six driving lanes, three for each direction (one fast, one normal, one emergency) 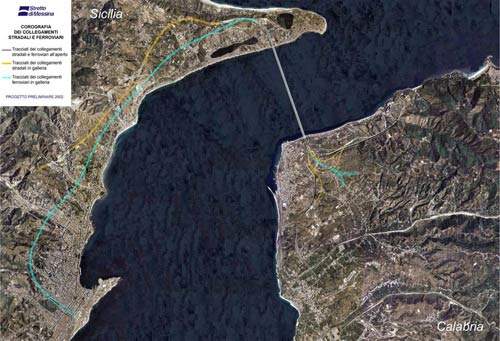 Satellite image of where the bridge will be constructed across the Straits of Messina. 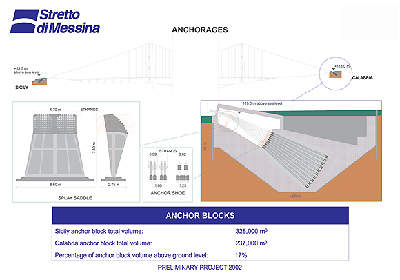 Explanation of the bridge anchorages.

A computer-generated image of the Messina Straits Bridge, viewed from the mainland. 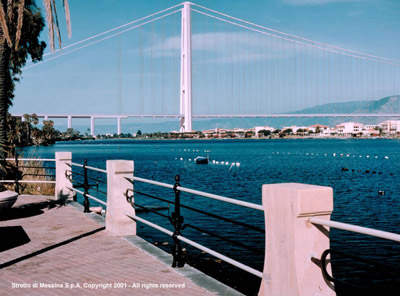 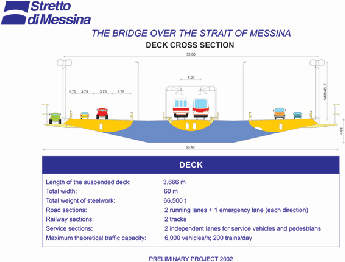 Explanation of the bridge deck. 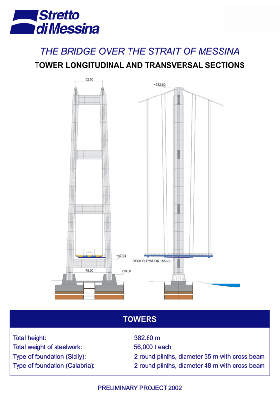 Explanation of the bridge towers.

The new Messina Straits suspension bridge to link Sicily with the Italian mainland was likely to be one of the most impressive feats of engineering undertaken this century and one of the biggest construction projects ever undertaken in Europe.

Following the plans for the bridge being scrapped by Italy’s new prime minister in October 2006 the project was thought to be totally dead and buried. However, governments change and in April 2008 a general election returned the previous Prime Minister Silvio Berlusconi to power. One of Berlusconi’s first acts was to revive the bridge project.

Although the project was welcomed and criticised in equal measure, it is certain that it would have inspired a generation of Italians to marvel at their country’s engineering skills and prowess. The bridge would have significantly helped reduce the infrastructural deficit in Southern Italy, creating favourable conditions for the economic growth and social regeneration of the region and promoting an integrated road infrastructure (probably requiring badly needed additional investment).

The bridge was being constructed by the Italian Government, which formed a company, the Stretto di Messina SpA, to oversee construction and operate the bridge when potentially completed in 2012.

Spanning the Messina Straits, the bridge would have been almost 4km (2.5 miles) long and would have cut the two-hour journey time by ferry and train (transporting over 18,000 vehicles per day). The controversial project had been on the drawing board since the 1960s and has been criticised because it would be
a waste of public money in Italy where public spending is already overstretched and also because the area in which the construction was taking place had some seismic activity in the past.

A group led by Italian construction firm Impregilo was to start work next year and was expected to complete the construction by 2012. Parsons Transportation Group was awarded the project management consulting services contract worth €120m.

The bridge was to carry a double six-lane highway and four tracks for a high-speed railway line. The other contractors included Ishikawajima-Harima Heavy Industries of Japan, Sacyr Vallehermoso of Spain and Sacyr S.A., Società Italiana Per
Condotte D’Acqua SpA, Cooperativa Muratori & Cementisti-CMC.

Environmental Impact Studies in 2003 were carried out by a consortium formed by Systra SA, Bonifica SpA., Systra-Sotecni SpA. and Ast Sistemi Srl.

Fenice SpA with Agriconsulting, Eurisko, Nautilus and Theolab were the provisional winners of the tender
for environmental monitoring (before, during and after the project). Istituto Nazionale della Fauna Selvatica was to monitor bird life in the area.

Marsh SpA was the insurance brokerage company for the project and the financial advisor to Stretto di Messina is PricewaterhouseCoopers. The construction was due to begin in October 2006.

The Strait of Messina Bridge preliminary project is a revised version of the project first proposed in 1992, updated to include the recent findings and resolutions of the Technical and Scientific Committee set up by the Italian Ministry of
Infrastructure.

In May 2006, the bridge building project was questioned by the newly-elected Italian Prime Minister, Romano Prodi, but the project itself could not be scrapped at the time because of agreements and contracts previously entered into by the former government mandating either the construction of the bridge, or an equivalent penalty payment to the contracted construction companies. As will be seen later, he did not give up his questioning.

For the design of a crossing structure, the preliminary project definitively opted for a 3,300m-long single-span suspension bridge that will have the world’s longest central span. The deck was to be 3,666m long, including the two suspension side spans, and
60m wide.

The height of the two towers was set at 382.6m to allow for a navigation clearance with a minimum height of 65m – in the presence of maximum load conditions – and a 600m width; the height of the deck’s anchoring on the Sicilian side
was lowered by 11m.

The bridge’s suspension system was to be secured by two pairs of steel cables, each with a diameter of 1.24m and a total length between the anchor blocks of 5,300m.

The bridge was designed to resist, without damage, an earthquake of 7.1 on the Richter scale – much more severe than that which devastated Messina in 1908. It was also designed to withstand winds of more than 200km/h, given its aerodynamic configuration.

The preliminary project included 20.3km of road links and 19.8km of railway links to connect the bridge to the existing networks. Under the new design, most of the links were to be developed in tunnels enabling connection of the bridge directly to the
new routes.

On the mainland, the bridge was to connect to the new stretch of the Salerno-Reggio Calabria highway (A3) and to the planned Naples-Reggio Calabria high-speed railway line; on the Sicilian side, to the Messina-Catania (A18) and Messina-Palermo (A20) highways as well as the new Messina railway station (to be built by Rete Ferroviaria Italiana).

The Strait of Messina Bridge was to be open 365 days a year, 24 hours a day, without any interruption to traffic due to strong winds. This was due to its intrinsic stability and the use of special wind protection barriers that will allow traffic to move
normally even in the presence of strong winds.

With regard to stability, the bridge, defined as ‘designed by the wind’, had a wing profile with aerodynamic characteristics that enabled it to withstand winds at speeds of more than 216km/h (in over 20 years of wind monitoring, speeds of more than 150km/h have never been reached).

Studies in wind tunnels have made it possible to provide a comfortable crossing and optimum stability in the presence of both medium / low and strong winds.

Suspension bridges are not typically sensitive to earthquakes as the bridge’s structural configuration has a type of natural insulation that comes from the typical frequencies of seismic stresses (periods of fractions of seconds). This helps to
insulate the structure against the physical possibilities of vibration periods of several seconds and tens of seconds.

The Strait of Messina Bridge was designed to withstand an extreme earthquake with a magnitude of around 7.1 on the Richter scale (the maximum ever recorded in Italy) with the focus at around 15km from the bridge. Such an earthquake is extremely
rare.

In October 2006 it was reported that the plans for the world’s longest single-span suspension bridge between Sicily and the peninsula had been set aside and scrapped following a vote by Italian MPs. The Italian parliament ratified a cabinet-approved motion that compelled the government to abandon the 30-year-old dream of spanning the Straits of Messina and put other road infrastructure works first.

“Berlusconi returned to power in April 2008 and has now revived the bridge project.”

Silvio Berlusconi had already secured partial funding from the European Union for the €6bn (£4bn) scheme before his defeat at the polls. Romano Prodi, who replaced Mr Berlusconi as Prime Minister in the general election earlier in 2006, had already cast doubt on the scheme and seemed determined to consign it to the scrapheap. Prodi won the vote against the bridge by 272 votes to 234.

The new infrastructure minister then warned that cancelling the project would mean the taxpayer giving away at least €388m in compensation to the consortium contracted to build the bridge. The biggest reason for scrapping it is that the Italian treasury, which has vast interest payments on the national debt cannot afford its share of the cost.

A further argument against the scheme was that the road and rail networks on either side of the straits are incapable of supporting enough traffic to make the bridge profitable. Other reasons for scrapping included the earthquake risk in one of the most seismically active parts of the Mediterranean, and the danger of encouraging an increased organised crime network between the Cosa Nostra of Sicily and the Ndrangheta of Calabria.

Berlusconi returned to power in April 2008 and has now revived the bridge project. The project will now go ahead although the completion date will obviously be delayed.