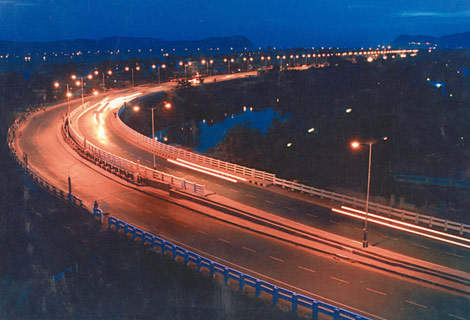 A four-lane, 111km concrete expressway is being built to connect Bangalore with Mysore.

Requiring a 90m right of way there will initially be four lanes for traffic (expandable in future to six lanes).

As well as the main expressway, the project comprises a southern section of Bangalore's peripheral road (connecting NH 7 and NH 4), a link road connecting the expressway to SH 17 and an elevated link road to downtown Bangalore.

India’s technology capital Bangalore is to get an $87m toll motorway to help battle the city’s growing congestion problems. The first stretch of the road was opened to public in mid-2006 and other stretches are being opened in a phased manner. About 33% of the cost will be paid for by the business tenants.

The project forms part of the larger 111km, four-lane Bangalore-Mysore infrastructure corridor project (BMICP), a realisation of more than a decade’s planning to solve the growing congestion problems of India’s technology capital.

The proposal is to build a four-lane elevated concrete toll expressway (expandable to six at a later date) to link Bangalore with a key job-spinning suburb to tackle traffic problems stemming from high levels of growth.

In this respect, India is following the example of other countries such as France, which have long used toll roads to smooth traffic flows and reduce congestion.

The four-lane, 111km concrete expressway that will connect Bangalore, the state capital, with Mysore, the state’s cultural capital, is expected to cut driving time between the two cities from the present four hours to 90 minutes.

At the Bangalore end, a 41km peripheral road connects the expressway to NH 4 (Bangalore-Pune) and NH 7 (Bangalore-Hosur). A 9.1km link road connects Bangalore city centre to the expressway. A limited-access expressway, it will have a continuous barrier on either side. The development of five self-sustainable townships has also been planned as other components of the BMICP.

Components of the four-lane expressways consist of the following:

Some 20,193 acres of identified land in Bangalore, Mandya and Mysore is being acquired for the company by the Karnataka Industrial Areas Development Board. Of this, 4,000 acres are for the expressway.

“The project forms part of the larger 111km, four-lane Bangalore-Mysore infrastructure corridor project (BMICP), a realisation of more than a decade’s planning.”

The city of Bangalore, capital of the southern state of Karnataka, now accounts for some 32% of India’s $12.5bn annual revenues from overseas outsourcing.

Bangalore was originally created to house a population of 200,000 and is today home to more than 5.5 million people. The population of the city reached an estimated 8.5 million by 2011 and is expected to grow further. This onrush is led in large measure by the information technology revolution sweeping through the country with Bangalore by far the preferred destination, given its skilled manpower pool and climate.

This revolution, while bringing prosperity to the city, has led to the breakdown of civil infrastructure, including choked and narrow roads unable to cope with growing vehicular traffic, power and water shortages and severe air, water and noise pollution.

Besides helping achieve the economic growth of the region, the project will also help to alleviate the problem of commercial traffic travelling on the busy NH 4 and NH 7 (linking Chennai in the southern region to Mumbai in the western region – two of the five metro cities of India) without crossing downtown Bangalore while moving from Mumbai to Chennai or vice versa by providing a fast, grade separated bypass.

This not only saves the commercial traffic valuable time spent at check points and traffic intersections, but also fuel and other operating costs. This will reduce the pollution levels in the city of Bangalore since the through commercial traffic will no longer travel on the city roads.

Funding for this project is by a Public-Private Partnership with the Karnataka state government and the National Highways Authority of India, holding a 33.33% stake each, and the final third being contributed by the Electronics City Industry Association.

“At the Bangalore end, a 41km peripheral road connects the expressway to NH 4 (Bangalore-Pune) and NH 7 (Bangalore-Hosur).”

This organisation, which comprises a number of large US and European companies such as Infosys, Wipro, Siemens and Hewlett-Packard, will participate in the BOOT (build, own, operate and transfer) project.

The Kalyani Group of Companies and SAB International formed Nandi Infrastructure Corridor Enterprises (NICE) to develop the Bangalore-Mysore Infrastructure Corridor. As the owners of this project they are implementing the project in its various phases and will operate the facilities after completion of construction.

The toll road is the first to get off the mark among the slew of private-funded infrastructure initiatives that were conceived for the state, along with the Bangalore international airport and the Bangalore elevated light rail transit system.

NICE hopes to complete the project in five years – or half the scheduled construction period. It will own and operate the project for 30 years subject to further extension. Phase one is estimated to cost $87m and expected to involve a construction time of about 30 months, but has been delayed.