Department of Transport
2 bridges, a new Vehicle inspectorate and a new local road alongside the widened upgraded A74
Expand 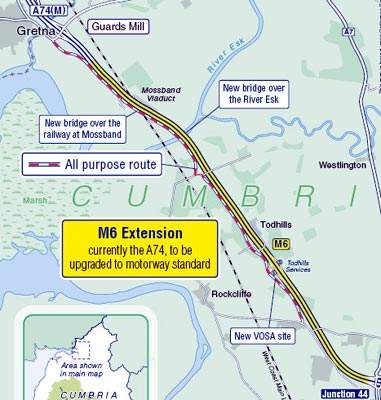 The M6 motorway extension project will cost around &pound;174m.

How the A74 looked prior to the upgrade; the route will change dramatically. 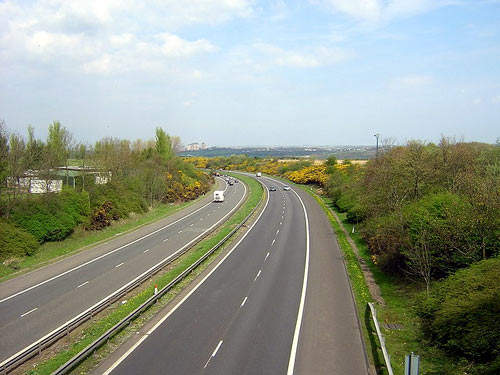 The M6 will connect directly to the M74 and lead straight to Glasgow. 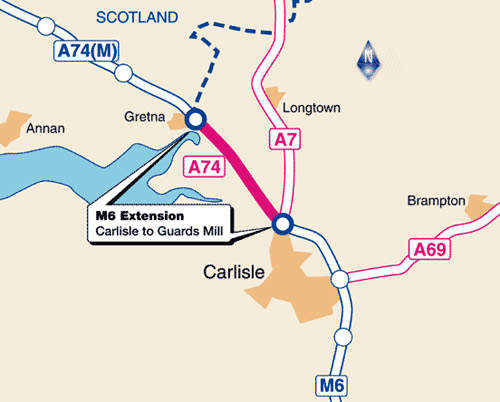 The extension project will finally link the Scottish and English motorway systems. 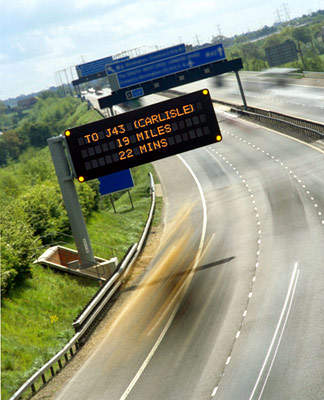 VMS signs will increase safety on the M6.

In July 2006, work was started by the Department of Transport to upgrade the A74 between junction 44 to just south of Gretna Green (Guards Mill) where the A74 becomes the M74. In this way there is a continual motorway connection from London to Glasgow.

Work on the road upgrade and the construction of a new ‘A’ road at its side for local traffic was completed in December 2008. The project was estimated to have cost £174m and was funded by the Department of Transport. The project was supervised by the Highways Agency.

The extension of the M6 runs from the north of Carlisle (Junction 44) to Guards Mill near Gretna.

“The new all-purpose route for local and non-motorway traffic provides access to all nearby villages and properties.”

The new all-purpose route for local and non-motorway traffic is to the west of the new motorway, running parallel to it and in places it uses existing roads. It provides access to all nearby villages and properties.

Improvements also include two new bridges that were built at Mossband and Metal Bridge. At Mossband a bridge was built over the West Coast Main Line railway in 2008 to carry both carriageways of the new motorway and the all-purpose route.

At Metal Bridge a bridge crossing the River Esk alongside the existing A74 bridge was built to carry the southbound carriageway over the river.

In addition, a new, larger and better equipped site for the Vehicle and Operator Services Agency (VOSA) was built a mile (1.5km) north of its current location.

Two of the main contractors for the project were Carillion Construction (Carillion Roads) and their design consultants, Capita Symonds. Carillion provided a range of services including environmental assessment, management and design, geotechnical engineering, highway design and structural engineering.

“The scheme resolved the safety problems caused by the change from motorway standard at either end of the section.”

The project progressed according to schedule and in June 2007 engineers moved a new 800t motorway bridge (designed by Grontmij) into place across the river Esk (bridging the Cumberland Gap) using cranes, cables and hydraulics.

The new 17m-wide bridge reportedly cost £5.2m. The bridge, which was moved in two stages, was finally completed by an 80m section in June. At the Mossband Viaduct the foundations, walls and beam placement were completed.

Sections along the All Purpose Route (APR) between Floriston and Metal Bridge and Mossband to Guards Mill have been surfaced and are being used by local traffic.

At the new VOSA site, the existing land was levelled to allow construction of the VOSA facility and the APR. This involved the removal of around 200,000t of soil for the construction of embankments around the site.

The Highways Agency appointed Carillion Construction Limited in February 2003 under the Highways Agency’s Early Contractor Involvement (ECI) initiative, to take the scheme forward. This allowed for development and detailed planning of the works to be carried out while the scheme was taken through the statutory procedures including the 2005 public enquiry, which noted a number of objections.

The Secretary of State for Transport passed the project through in 2006 after deliberating over the objections.

The M6 Extension is basically a widening scheme that completed the motorway when it was opened to traffic in December 2008.

The scheme more importantly resolved the safety problems caused by the change from motorway standard at either end of the section and removed the conflicts between local / agricultural traffic and the high speed through traffic and replaced the Mossband Viaduct over the West Coast Main Line.

In August 2007 the new VMS (variable message system) signage linked to the National Traffic Control Centre was installed on the north west sections of the M6.