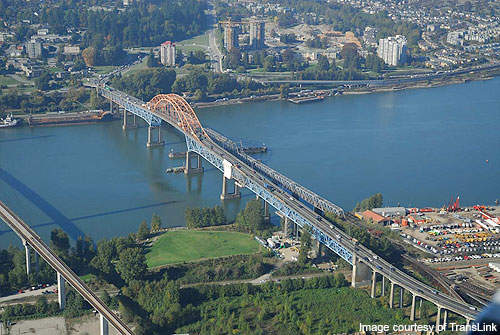 The Pattullo Bridge is owned by TransLink. 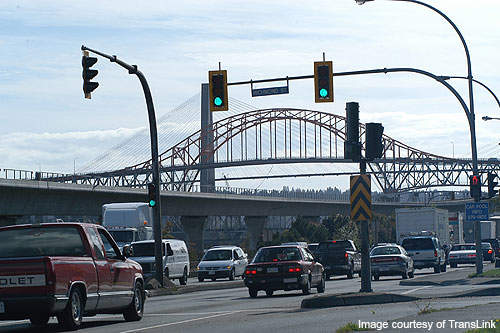 The Pattullo Bridge was opened to traffic on 15 November 1937. 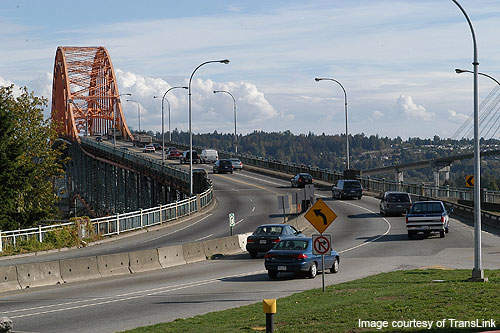 The bridge links the cities of Surrey and New Westminster.

Built across the Fraser River, the Pattullo Bridge links the cities of Surrey and New Westminster in British Columbia, Canada. The bridge was named after the former British Columbia premier Duff Pattullo. It was opened to traffic in November 1937. It has four traffic lanes and a downstream sidewalk.

Greater Vancouver Transportation Authority (GVTA), which is also known as TransLink, owns the bridge. Nearly 80,000 vehicles use the bridge every day.

On 18 January 2009, a wooden trestle, which supports the southern end, underneath the bridge caught fire and was destroyed. The structure, which consisted of wood covered in creosote was 71 years old at the time. Wood had been used to provide stability in a marshy area. The bridge was temporarily closed after the fire and re-opened on 26 January 2009.

Experts fear that the Pattullo Bridge will be at risk if a strong earthquake strikes the area. The bridge has had no seismic upgrade in the last 12 years (reported in 2011). TransLink is considering either retrofitting or replacing the bridge. If the old bridge remains, then it will have to be closed in the event of an earthquake, according to TransLink.

“The Pattullo Bridge was designed by Major W.G.Swan.”

In 2008, TransLink, the transportation authority of the southern coast of British Columbia, announced that a new six lane bridge will be built to replace the aging bridge, at a cost of approximately CAD1.2bn, by the end of the decade. The completion date was later postponed to 2015 or 2016.

In February 2011, it was reported that TransLink was reconsidering its decision to build the new bridge. A public consultation on the subject will be conducted in June.

Construction of the Pattullo Bridge began in October 1935. The bridge was opened to traffic on 15 November 1937. The total length of the bridge is 7,800ft inclusive of the length of the approaches. The clearance above the Fraser River is 150ft.

The bridge was built by The Dominion Bridge Co. (re-named ADF Heavy Industries in 1998) and Northern Construction & J.W. Stewart.

The original bridge construction had cost CAD 4m, including the cost of the main contract, cement, purchase of the right of way, and re-alignment and the resurfacing of highways.

In August 2002, Buckland & Taylor were commissioned to inspect a set of components of the steel truss spans of the bridge located between Piers 0 and 9. In January 2003, Buckley & Taylor were asked to inspect the remaining components. They were also asked to provide a live load rating of all the deck systems and truss members between Piers 0 and 9.

In 2009, the company designed the emergency replacement of the section of the bridge destroyed by the fire. They located the replacement in the Langley, British Columbia yard of Surespan Construction. The structure had been used as a bridge over an excavated station location.

“Experts fear that the Pattullo Bridge will be at risk if a strong earthquake strikes the area.”

In 1995, Ausenco Sandwell conducted a preliminary seismic assessment of the bridge. In 1998, the company conducted a full condition and rehabilitation study with cost estimates for the Ministry in order to facilitate the transfer of the bridge’s ownership to TransLink.

In 2006, Ausenco Sandwell, working for TransLink, came up with a preliminary design for the rehabilitation, widening and seismic retrofitting of the bridge.

The Pattullo Bridge was designed by Major W.G.Swan who was the consulting engineer on the project. He designed a compression arch suspended-deck bridge.
The unique design feature of the bridge is a wooden trestle. The area in which the bridge was built has weak and compressible soft soil.

A short wooden section with a shallow foundation and timber structure was worked into the design. This was done so that the section could be shimmed up regularly to deal with the sinking of the soil due to the weight of the bridge. A very flammable petroleum based product called creosote was used as the preservative for the wooden beams.

The extremely narrow lanes and the curves on each end of the bridge are considered to be serious design flaws by today’s standards.