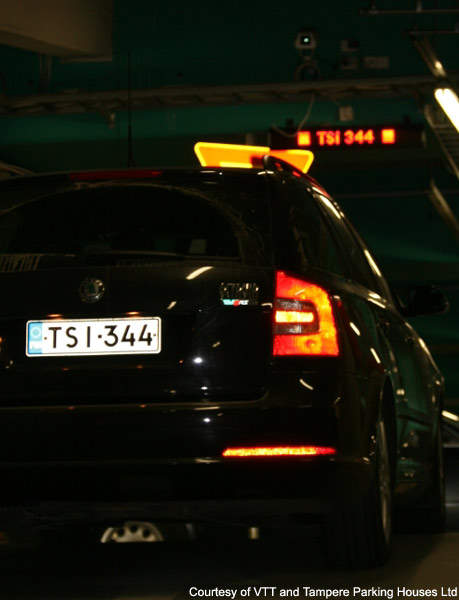 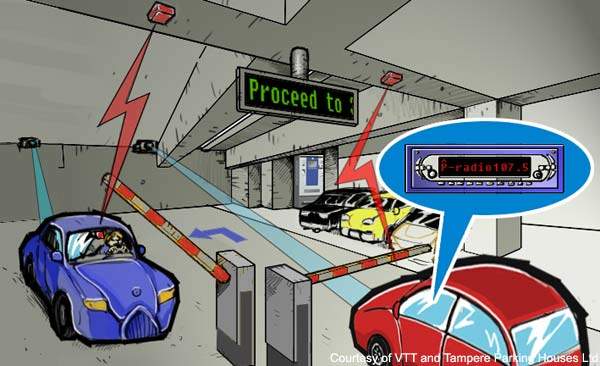 The car park in Tampere, Finland used in the project was wired with a localised FM radio channel to give out messages. 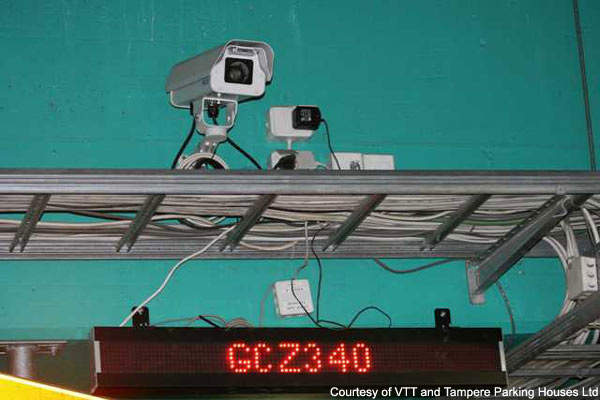 The cameras used in the license plate recognition system were manufactured by Bosch. 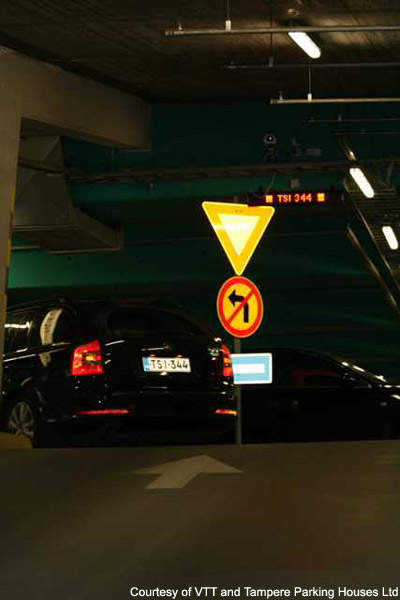 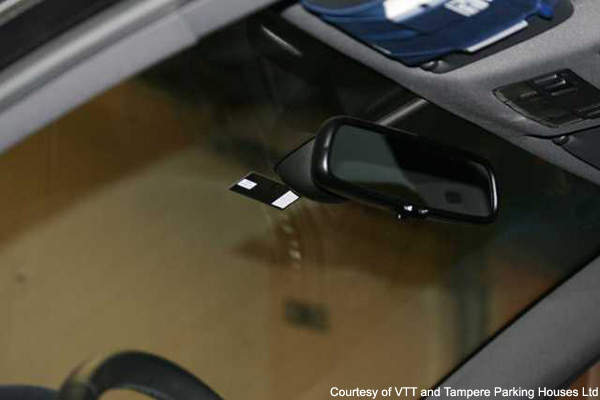 An RFID TAG is easily attached to the windscreen for a season ticket holder.

Perhaps one of the biggest problems with parking a vehicle in a car park, be it a multi-storey or open air facility, is the human element. Many companies are now trying to provide sophisticated guidance systems, which not only tell the driver where to park but can also keep tabs on the vehicle while it is in the car park.

In mid-2007, the P-Innovations research project, led by the VTT Technical Research Centre of Finland started a pilot scheme to investigate automatic vehicle recognition and dynamic guidance in a single parking structure.

“This project represents the first time in Europe that a parking application has used passive long-range RFID remote identification for vehicle identification.”

The project was started in a car park in Tampere and has used RFID (radio frequency identification) and optical number plate recognition. The combination of these two technologies has allowed floor-specific vehicle amount calculation and also vehicle parking guidance. This project represents the first time in Europe that a parking application has used passive long-range RFID remote identification for vehicle identification.

The project, which ran until the end of 2007, has been led by VTT and Tekes (Finnish Funding Agency for Technology and Innovation) with funding of €60,000. Other companies involved from a funding and technology perspective include Tampereen Pysäköintitalo Oy, Idesco Oy, Audio Riders Oy, Vidamin Oy, Finnish LED-Signs Oy and Ramboll Finland Oy.

The project has aimed to test how UHF (ultra-high frequency) RFID identification and optical registration plate recognition can be used for automatic vehicle identification using a sample of 50 pilot users. The project also examined the use of variable signals including signposts (variable message signs), lights and also audible signals for situation sensitive guidance and notification in parking structures (guiding vehicles into a vacant parking space).

One of the objectives of the experiment was to give the six involved companies a chance of identifying products and technology that could be used in this application and also to collaborate and generate ideas for future development of parking management systems.

The project used floor-specific vehicle monitoring and passage monitoring for the trial. The passive RFID and number plate recognition allowed vehicles to be identified and then tracked and directed via signs so that the car park could be controlled from a central control centre. The system also used smart speakers for the automated payment area, which would react to a person standing in front of them and give instructions in several languages.

In addition, the car park, provided by Tampere Parking Houses Ltd, was wired with a localised FM radio channel to give out messages related to parking in the building; it was thought that this could also be used as an advertising medium. The RFID technology could also be taken a step further to log the vehicle in and out of the building via the ‘portal’ exits and this ‘time’ could then be used as the basis for automatic payment for the parking space instead of having to go through payment machines.

For the automatic vehicle identification and monitoring: the RFID readers used were manufactured by Idesco Ltd and the model was the IR 9000. The ALPR (automated license plate recognition) application was provided by Vidamin Ltd and was based on an ALPR library by Visy Ltd. The cameras used in the ALPR system were made by Bosch.

“100% of the pilot users were eager to continue the use of the concept.”

For the dynamic guidance part of the system: variable message signs were provided by Finnish LED-Signs Ltd. The smart loudspeakers were built by Audio Riders Ltd and tailored into the needs of the project. The same applies to the audio distribution device used in radio transmitting. The radio transmitters were commercial AudiaX transmitters.

The software managing the whole system was implemented by VTT.

Tami Koivuniemi, the development manager for Tampere Parking House Car Parks, commented: “The project provided the consortium with valuable experience on applicability and functionality of the AVI, AVM and dynamic guidance concepts both separately and as integrated system.

“The pilot user feedback was only positive and partly laudatory. It was especially seen that the piloted concept greatly made it easier for season ticket customers to access the car park. 100% of the pilot users were eager to continue the use of the concept.

“The project has aroused great interest both in Finland and internationally. The project consortium is thus proud to be in the frontline of developing advanced parking services. Parts of the concept are sure to be taken into operative use in Tampere Parking House car parks in the near future.”