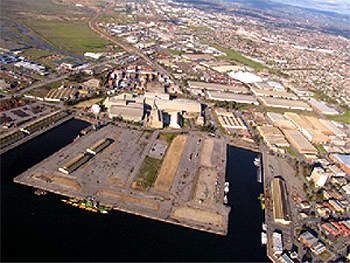 View of Stage 1 of the Port River Expressway from the South Road overpass, looking east. 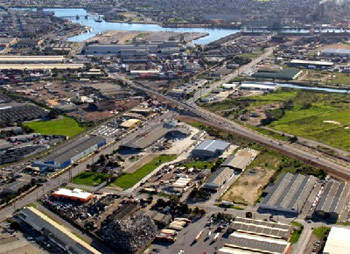 The expressway with the Port in the background. 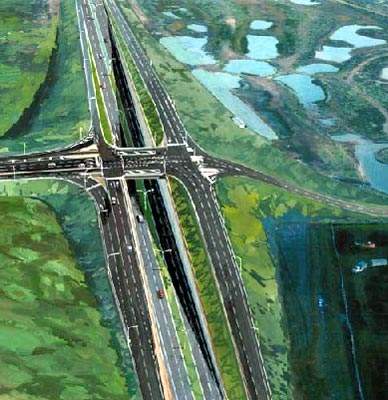 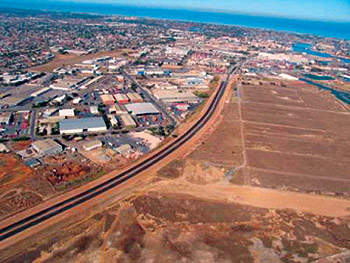 The site prior to stage one. 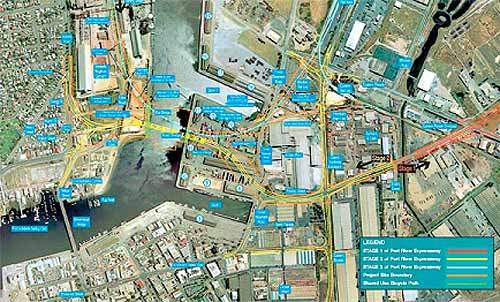 Environmental concerns have been a big consideration for this project. 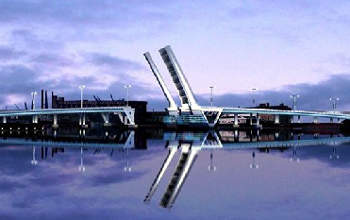 Photomontage of the road and rail bridges from the east side of the Port River. 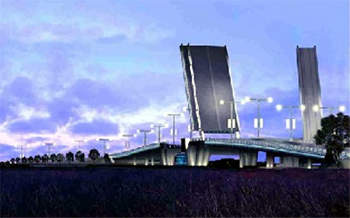 Photomontage of bridges from Queen’s Wharf. 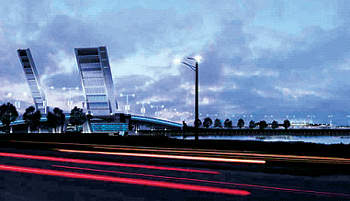 Photomontage of the road and rail bridge from the west side of the Port River.

The Port River Expressway (PRExy) links the major port and rail terminals at the Port of Adelaide in South Australia directly with the National Highway to Perth and Darwin via Port Wakefield Road, the National Highway to Sydney and Melbourne and the Interstate Mainline rail network. The project is an important strategic transport route for South Australia, which will contribute to the economic development of the region by providing an expressway and new road and rail bridge connections across the Port River.

The project was managed by the South Australia Department for Transport, Energy and Infrastructure. The construction of Port River Expressway was completed in three stages:

Stage 1: included construction of a 5.5km four-lane expressway link between Francis Street and South Road with an overpass at each of the junctions of South Road, Hanson Road and Eastern Parade

Stage 2: included construction of a four lane high-level, opening road bridge across the Port River between Docks 1 and 2, linking Stage 1 at Francis Street to Victoria Road.

Stage 3: included construction of a single track, dual gauge, high-level, opening rail bridge across the Port River and north of the road bridge, with connections to the existing rail system.

“The project is an important strategic transport route for South Australia, which will contribute to the economic development of the region.”

Stage 1 of the project involved the construction of a 5.5km four-lane expressway link between Francis Street and South Road with overpasses at each of the junctions of South Road, Hanson Road, and Eastern Parade (there is an 90km/h speed limit, reducing to 60km/h over the Eastern Parade overpass). It also included the construction of Hanson Road to Cormack Road from the expressway, providing access to the expressway from the south.

The road, which was constructed on approximately 2m of fill material (1.7 million tons of fill required), which provides a raised platform from which to view the surrounding landscape was started in December 2002, and opened to traffic in July 2005.

Funding for the project was a joint contribution between State and Federal governments under the Roads of National Importance Program (RONI). The project was delivered through a Design-Construct-Maintain (DCM) contract by South Australian company Bardavcol Pty Ltd. In a number of locations, reinforced earth retaining walls have been incorporated within the embankments of the overpasses where retaining structures were required. ‘Ashlar’ precast concrete facing panels were used to provide a rock type finish.

The south road overpass has a unique design consisting of a large roadway loop that extends hundreds of metres into the Barker Intel Wetlands. The overpass has been named Craig Gilbert Bridge, after late Mr Craig Gilbert.
The Eastern Parade overpass has urban design features such as bright blue steel beams (provided by Bluescope Steel) and reinforced earth walls with a rock face appearance to create an industrial theme, characteristic of Port Adelaide. More than 300,000 trees, shrubs and native grasses were planted along the Stage 1 expressway. Local species were used, as they are suited to the local conditions and environment and assist in maintaining a native scheme.

Watercourse contamination was kept to a minimum during construction by the diligence of Tomkin Consulting. The first stage of the project cost $91.5m.

The bridge consists of eight fixed spans and a shared path for pedestrians and cyclists.

To connect to the new bridge, changes to the existing local road networks were made. Rail level crossing at the Nelson Road and Semaphore Road were removed. To ensure a smooth flow of traffic in the area, the signalling of these two intersections have also been coordinated.

The contract to design, construct and maintain the road and rail bridges across the Port River was awarded to Abigroup Contractors in July 2005. Abigroup will maintain the project for a ten-year period. The two projects costed $180m, which was provided in a joint contribution between State and Federal governments under the AusLink Investment Program.

The two bridges started construction in November 2005 and were completed by mid 2008. A toll is not applied to the road bridge. The road bridge of the Port River Expressway is known as the ‘Power Bridge’. The rail bridge is named ‘Mary MacKillop Bridge’ in honour of a woman who was beatified by Pope John Paul II in 1995.

There is also a clear zone of 11m wide from the wharf edge and a minimum of 4.6m in height under the bridge to allow for public boardwalks around the waterfront, which will be developed as part of the Port Adelaide Waterfront Redevelopment.

Each bridge has a large window (glass curtain wall) to facilitate viewing of the opening mechanisms. There are also viewing platforms on the road bridge, with stairs providing access from the wharf level. The bridges take 70 seconds to open or close with back up mechanisms in the event of a power failure; there are also fendering between the two bridges to provide protection for the bridge piers.

Over 175 piles have been used for the road and rail bridges over an eight month period, each of which is 30m long and 900mm in diameter. The road bridge is designed to be an over-dimensional route and cater for vehicles with dimensions 7m wide and 7.5m high.

Orrcon was one of the major suppliers of steel and steel piping for the construction of the two bridges.

The bridges opens twice on demand (once in the morning and once in the evening), every day between Mondays and Fridays out of peak traffic times, to minimise disruption to rail and road freight movements. On Saturdays, Sundays and Public holidays, the bridges open thrice a day for 15 minutes. However, if all the marine traffic is unable to pass in the allocated time, the bridges are closed for the road traffic to clear.

The bridges are operated remotely by Norwood Traffic Management Centre. Variable message signs and/or changeable message signs are located along the major routes between Salisbury Highway–South Road Connector and the LeFevre Peninsula to advise motorists of impending bridge openings.