Entrance to the Eagle's Nest Tunnel. 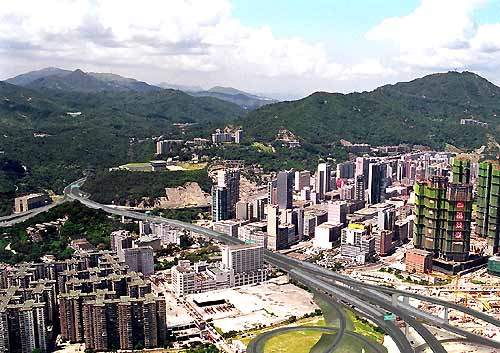 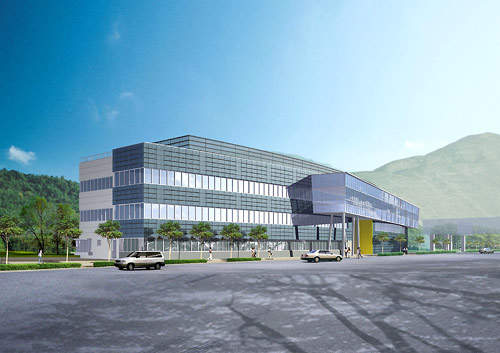 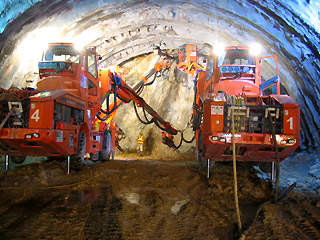 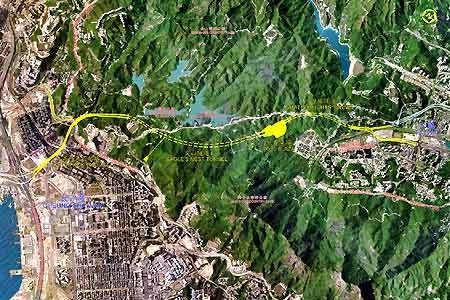 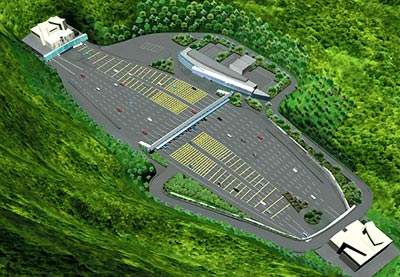 A toll plaza is located in the valley between Eagle's Nest Tunnel and Sha Tin Heights Tunnel. 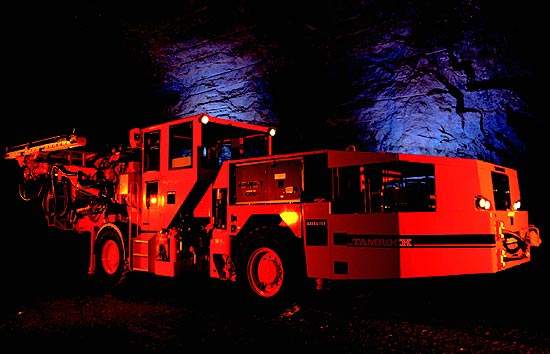 Tamrock Axera tunnelling jumbos are being used to construct tunnels on Route 8. 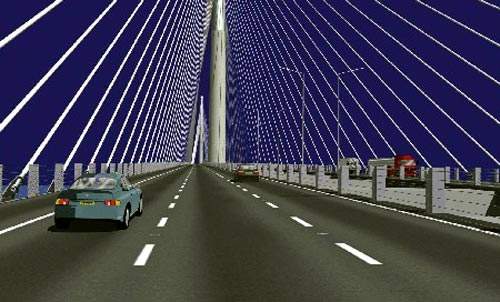 The cable stayed Stonecutters Bridge is an integral part of Route 8. 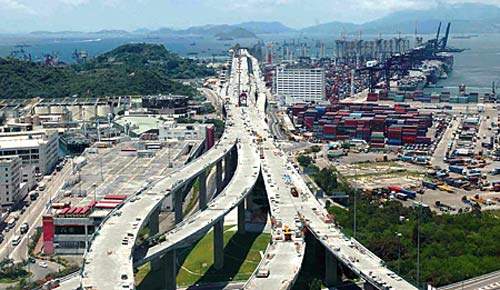 Part of Route 8 will be open soon with the whole project being open in 2008. 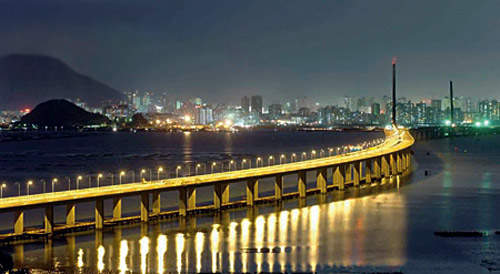 The project includes some notable engineering feats, such as bridges, tunnels and road paving.

The construction of Route 8 (previously known as Route 9) was a major capital project in Hong Kong, which involved not only road construction, but also associated viaducts, bridges and tunnel construction through difficult terrain. Route 8 is a high-capacity highway linking Lantau Island, Kwai Ching, West Kowloon and the Northeast New Territories.

The North Lantau Highway and Lantau Link, which are part of the route, were opened to traffic in 1997. The two remaining sections, which were constructed in separate projects, include the section between Tsing Yi and Cheung Sha Wan (started in 2003) and the section linking Cheung Sha Wan and Sha Tin (started in 2002). The road has integrated the route from Hong Kong International Airport (Chap Lap Kok Airport) to Sha Tin and has made the airport much more accessible.

The Tsing Yi to Cheung Sha Wan section was completed and opened in December 2009 at a cost of $11,718m. The section from Cheung Sha Wan to Sha Tin was commissioned in March 2008.

In addition there are access ramps connecting Route 8 with the local road network at CT8 and CT9 and ancillary works, including traffic control and surveillance systems, electrical and mechanical systems, geotechnical and drainage works and environmental mitigation measures such as noise barriers, low noise road surfacing and landscaping. The design and construction consultants for this section were Ove Arup and Partners Hong Kong Limited.

“Once completed the road will integrate the route from Chap Lap Kok Airport to Sha Tin and make the airport much more accessible.”

The design of the viaduct was by Ove Arup & Partners and the construction was carried out by Bouygues Travaux Publics, China Harbour Engineering Company Group and Dragages et Travaux Publics (HK) (RMD Kwikform Hong Kong supplied the formwork for the structure). The viaduct consists of 1,939 prestressed precast concrete segments and have a total of 5km of access ramps.

The Cheung Sha Wan to Sha Tin section is a 6km-long, dual three-lane highway. The scope of the construction for this section of the project included:

The design and construction consultant for this section was Maunsell Hyder Joint Venture. Environmental consultants included Cinotech Consultants Ltd and CH2M-IDC Hong Kong Ltd. This section of the project was opened to traffic in March 2008.

The Delcan-Imtech-GEC Services Joint Venture (DIG) was awarded the contract for the design and implementation of traffic control and surveillance systems on the entire Route 8 project. The joint venture consisted of GEC Services (Hong Kong) Ltd, Delcan International Corp of Canada and Imtech Projects BV of the Netherlands.

The final partner of the joint venture, Delcan, was responsible for the design, development and implementation of the central control software of the traffic control and surveillance system.

The contract for the construction of the Eagle’s Nest Tunnel was awarded to a joint venture between Leighton Contractors (Asia) Limited and Kumagai Gumi Company Ltd. Construction began in October 2003 and the tunnel was commissioned in March 2008 at a cost of $1,835.9m.

The tunnel forms an important part of the strategic route between Cheung Sha Wan and Sha Tin and was designed to improve the road capacity between Sha Tin and Kowloon in anticipation of future traffic demands generated by development in the northeast New Territories.

The project comprises two 2.1km, three-lane tunnels from Butterfly Valley to Shatin Valley through Eagle’s Nest mountain (granite), and all the associated electrical, mechanical and landscaping works that will be necessary. The full scope of the construction project included:

Sandvik Tamrock Corp had supplied five new Tamrock Axera tunnelling jumbos for the Eagle’s Nest tunnelling project. The first unit was a Tamrock Axera T08, a two-boom jumbo with basket boom and Tamrock Computer Aided Drilling (TCAD) instrumentation. This unit was used at the ventilation shaft and was delivered in April 2004. The remaining four units are all Tamrock Axera T12DATA – three-boom fully computerised jumbos with basket booms. These units were delivered to the site in summer 2004 and were used in the main tunnel with two units drilling side-by-side for the cross section area of height 11.8m and width 16.3m.

The Lai Chi Kok viaduct is an elevated road connecting the Ngong Shuen Chau viaduct and the Eagle’s Nest Tunnel. The 69 span structure carries a 1.43km, dual three-lane carriageway and has four slip roads. Two of the slip roads connect with Ching Cheung Road near Mei Foo and Castle Reak Road at Butterfly Valley, while the other two provide access for traffic (over 300,000 vehicles per day) on and off the viaduct at Lai Wan Interchange.

The slip roads cross over the existing Kowloon-Canton Railway Corporation (KCRC) East Rail tracks, the route of future railway tracks and the Tai Wai Maintenance Centre of the Tai Wai-Ma On Shan railway project in the form of two viaducts.

“The Eagle’s Nest Tunnel forms an important part of the strategic route between Cheung Sha Wan and Sha Tin.”

The 1,766 segments of the viaduct, some of them weighing over 100t, were lifted into place using a 175m long moving gantry. The last of the segments of the Lai Chi Kok Viaduct (LCKV) was put into place at the end of 2006 and the focus of the work was redirected to the completion of the carriageway.

Route of the viaduct

The designers adopted a precast segmental box girder deck with span lengths ranging from 60m to 80m to balance the need for an economical design and keeping within the site constraints. The general principle was to have the deck supported on single columns, to minimise ground level impacts, but with portal frames used where necessary to span over critical ground constraints.

With the flexibility of using both single and portal column supports, the design then focused on where the foundations could be located in order to offset the competing constraints of structural efficiency, traffic requirements and protection of existing structures. The integral design for both the deck and sub-structure allowed an efficient design for the foundations and sub-structure resulting in a direct reduction in the scale of column dimensions, the number of piles, and pilecap dimensions.

The design concept behind this was to both reduce the maintenance activities for the viaduct and to take advantage of the ability of the continuous deck to redistribute the significant potential horizontal loading from wind and earthquakes along the continuous sections of the viaduct.

Construction of the Viaduct

The main structure was built using a combination of segment lifting methods. The piers and cross-heads were built in advance of the gantry erection to allow the 920t gantry to ‘walk’ from pier to pier to erect segments. This arrangement allowed the gantry to follow the complicated geometry of the LCKV and lift the heavy segments. The segments were then stressed together using both internal and external prestressing.

The segments, generally 2.3 to 2.5m in length, were cast in a yard in mainland China and delivered to site via barge to a loading point near the site and then by low loader to the temporary storage yard at the LCKV site. Delivery of the segment to the rear end of the gantry was along the previously constructed section of deck via a specially designed segment carrier.

The Sha Tin Heights Tunnel project involved the construction of 0.9km of road tunnel and a toll plaza, along with connecting roads to Road T3 and slip roads to Che Kung Miu Road. The project had an estimated cost of HK$1.308bn. The excavation of the tunnel was started in December 2003 and the tunnel was completed in April 2007. The project was undertaken by the Civil Engineering and Development Department (CEDD) in Hong Kong. The project included: