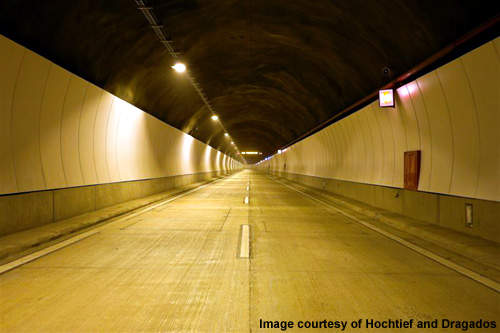 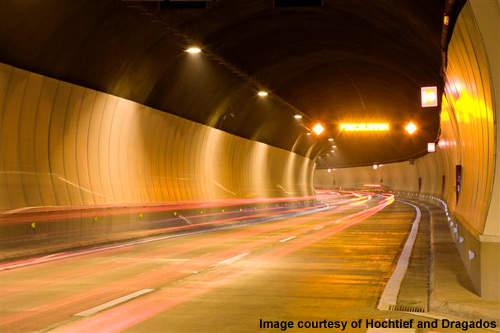 The San Cristóbal tunnels are only in limited use at the current time. 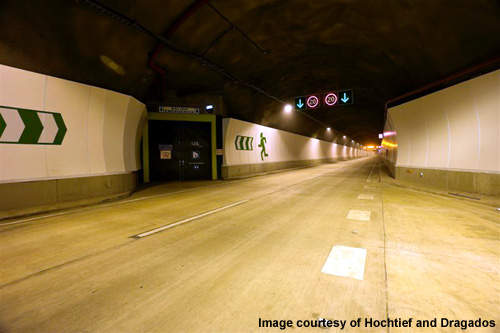 The tunnel has escape exits and refuges at regular intervals along its length. 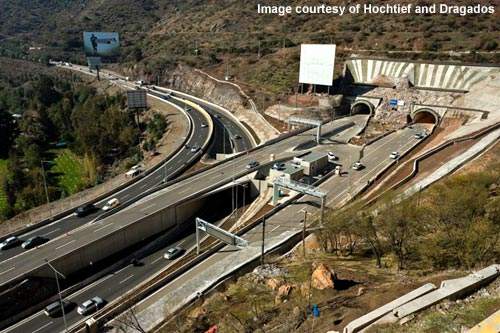 The northern portal of the San Cristóbal tunnels. 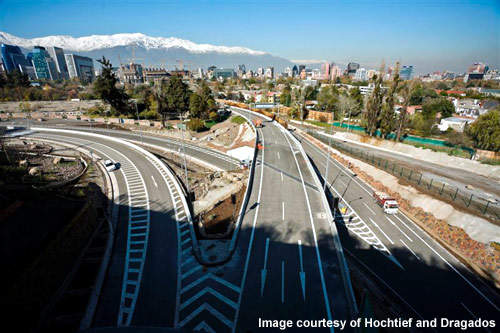 The San Cristóbal tunnel is part of a larger 4km-long project linking the business areas of Santiago to the northern suburbs.

The 1.8km twin parallel San Cristóbal tunnels are actually part of a larger 4km road construction project, the Variante Vespucio-El Salto-Kennedy, which has been undertaken to link Santiago’s eastern districts Providencia and Las Condes to the northern districts of Huechuraba and Recoleta through the San Cristóbal hill (1.8km of tunnel and 2.2km of access roads).

The project has required an investment of UF2.5m ($100m) and the construction began in May 2006. The tunnels were partially opened with the south-to-north section in 2008.

The project concession for a period of 33 years (2005–2038) was awarded to the consortium Sociedad Concesionaria Túnel San Cristóbal (San Cristóbal Express), which was formed for the project by Germany’s Hochtief and Spain’s ACS Dragados.

In February 2005, Hochtief (the leading member of the consortium) was awarded the contract for the tunnel and along with Dragados (each with a 50-50 share in the project) planned, constructed and financed the project. The San Cristóbal tunnel has two one-way tubes carrying two 3.5m-wide lanes each, with variable average width, and 1.5m shoulders and a gradient of 2.5% (the speed limit is 80km/h).

Indra of Spain was awarded an $8.7m contract in November 2007 to provide IT infrastructure for the tunnels and road system. The tunnels and associated roads are tolled using a transponder system.

The geology of the area required that the tunnels were excavated using drill and blast methods for a total length through both tunnels of 3,656m with daily progress of around 8m.

The tunnels were lined using TH-29 steel arches and variable layer shotcrete (3cm to 5cm) according to the rock type. Rapid excavation was possible with the use of high technology underground drill rigs and explosives.

For the San Cristóbal tunnel, three Sandvik drill rigs were used including two Axeras T11 and also a Paramatic H 205-90 all with fully computerised operation.

There were two blasts a day using Tronex Plus Dynamite with three-hour drilling cycles and 12-hour shifts for the jumbo drilling rigs. In the southern excavation a hydraulic hammer and excavator were also used for a great deal of the time.

The tunnel opened in July 2008 but was not fully open to traffic with a restricted flow running in a south-to-north direction only. The final opening was delayed to December 2008 because the tunnel control room operations were not up to the required standard and some sections of the tunnel did not meet the paving standards as stipulated by the concession contract.