Highway upgrading and some realignment (PPP) 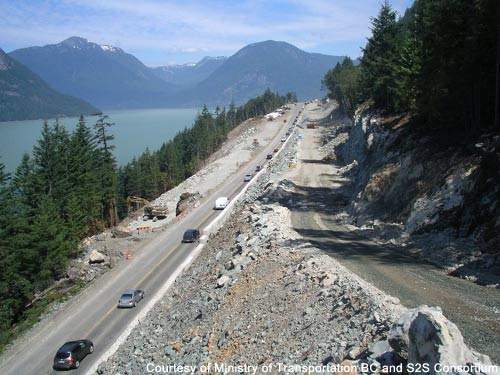 The Sea-to-Sky Highway Improvement project is due to be ready in time for the 2010 Winter Olympics. 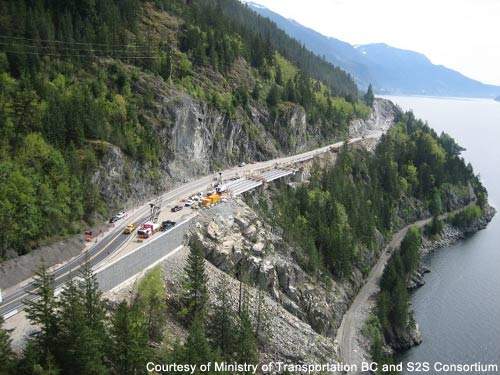 The S2S covers 100km from Whistler to West Vancouver. 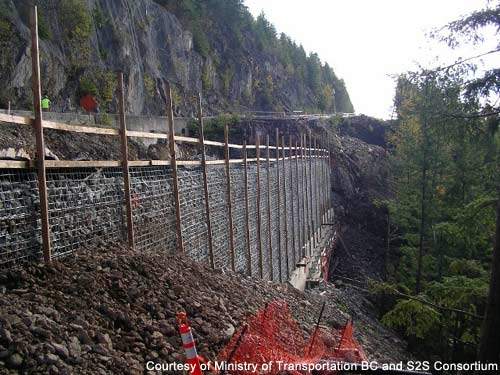 The mechanically stabilised earth walls in the S2S Improvement Project use a steel reinforcing mesh. 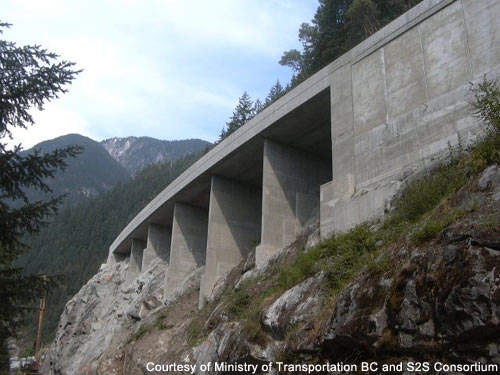 Some parts of the Sea-to-Sky Highway are being widened to four lanes, using new, stronger bridges to withstand adverse weather conditions.

The Province of British Columbia has invested &#36;200m into the Sea-to-Sky Highway project.

The Sea-to-Sky Highway in British Columbia, Canada, forms part of Highway 99 and runs from West Vancouver to Whistler. The ministry of transportation of British Columbia began an improvement project (the Sea-to-Sky Highway Improvement Project) on the road in 2005. The goal of the $600m project was to upgrade the road to improve safety and capacity for the future. The improved highway is capable of meeting population growth and travel demands until 2030.

The improvements were completed in December 2009, before the Winter Olympic Games that were hosted in February 2010. The games were hosted in Vancouver and Whistler and so there was a need for excellent road access. Before the improvement project was started, the road was a winding two-lane highway with poor access and many blind spots.

A new highway from Eagleridge to the North Junction, which is towards north of Horseshoe Bay was open to traffic in April 2009. This four lane highway enhances the capacity and safety of the old highway.

The highway provides the commuters, spectacular views of some of British Columbia’s most stunning scenery.

The contract for the road improvement was awarded in part in 2004 by the Province of British Columbia (Ministry of Transportation) and also the BC Transportation Financing Authority, on a design-build-finance-operate basis to S2S Transportation Group.

“The goal of the $600m project is to upgrade the road to improve safety and capacity for the future.”

The project was one of the first public private partnerships (PPP) to be started in North America. The PPP project was one with a difference, in that it involved both private and public segments.

The S2S Transportation Group had a $400m capital component in its contract to design, build, finance and operate a highway via a 25-year performance-based contract.

In addition, the Province of British Columbia has itself invested $200m into another section of the project.

The government-upgraded sections have included:

CH2M Hill was involved in the design of the Department of Transportation road sections.

“The Sea-to-Sky Highway Project is aiming to give straighter roads with better sight lines so that there can be more consistent driving speed.”

The project was managed in four distinct geographical sections so that the project could proceed efficiently between the two groups of contractors. These were Whistler to Squamish via Cullinton Creek, Squamish to Murrin Park, Murrin Park to Lions Bay and Lions Bay to West Vancouver.

The highway improvements have resulted in provision of better sight lines, additional lanes and widened paved shoulders to accommodate cyclists and emergency pull-offs.

The constructed chain-up areas can be used by motorists to pull off and install traction devices when required. The slope management plans implemented reduce falling rock from reaching the highway. The rocks on the highway will be regularly inspected and scaled under the annual maintenance programme.

Benefits of the project

The Sea-to-Sky Highway Project was aimed to give straighter roads with better sight lines (not so many blind bends) in order to provide more consistent driving speed. There are also 80km of new passing lanes between Horseshoe Bay and Whistler and new reflective markings along the entire route for better visibility.

Where possible on the route, it is provided with median barriers for safety and intersections are made safer. There are rumble strips on centre lines. In addition, there are stronger bridges constructed to withstand adverse weather and debris washed down by storm water.

Shoulders are widened for cyclists and disabled vehicles. The whole road is monitored using electronic weather equipment so that highway maintenance can act quickly in case of ice and snow. The route has been provided with better facilities such as pull-ins and shelters for the highway patrol along the route.