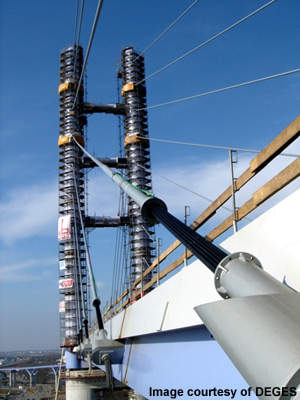 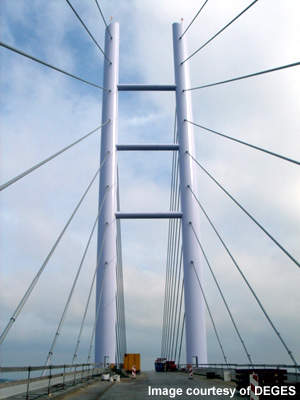 The cables on the cable-stayed Strelasund bridge are arranged in a harp configuration. 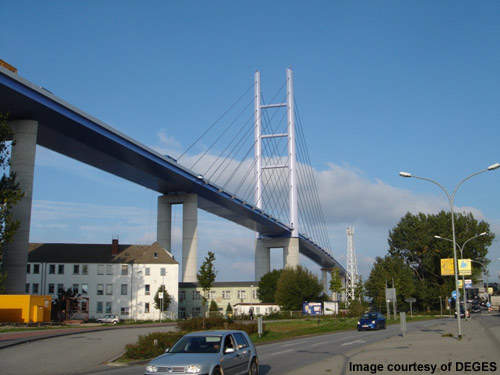 The route is an important link in the area, linking the island of Ruegen, the city of Stralsund and the A20. 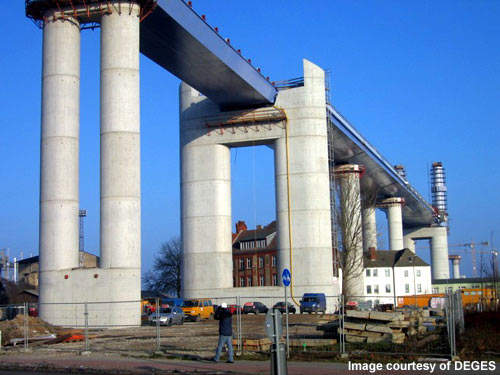 Construction of the system of bridges for the second Strelasund crossing began in August 2004. 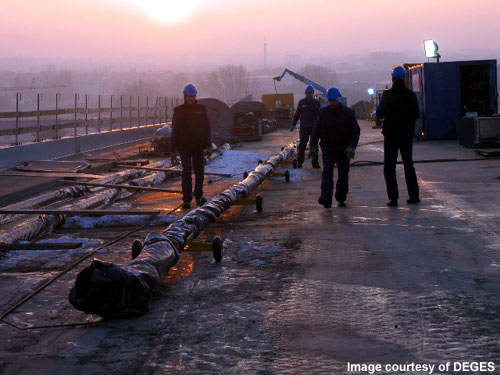 The cable stays are inside a sheath of HDPE. 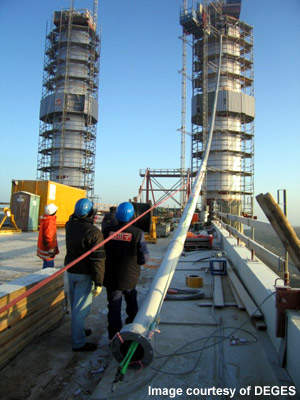 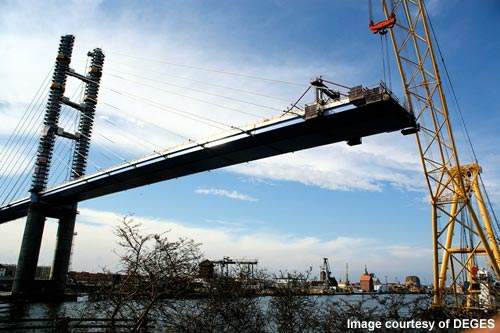 The six bridges for the new Stresalund crossing took three years to construct. 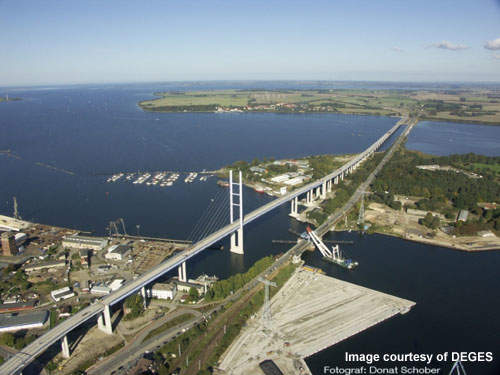 The bridges form a vital link to the popular holiday destination of Ruegen Island. 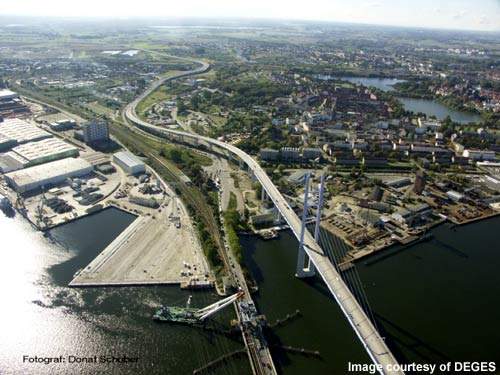 The cable-stayed bridge has navigation spans of 198m and 125m.

The second Strelasund crossing in Germany was opened in October 2007 by the Chancellor of Germany, Angela Merkel. The new system of bridges was constructed to provide a new connection between the island of Ruegen (a popular German holiday destination), the city of Stralsund, which is on the Baltic coast, and the A20 Ostseeautobahn (Baltic motorway). A feeder road is being constructed to Ruegen Island.

The new link will also relieve traffic congestion on the old three-section Rugendamm road and rail bridge, which was opened in 1936. The bridge is owned by the Federal Republic of Germany who were represented in the project by DEGES (Deutsche Einheit Fernstraßenplanungs und bau GmbH) and the federal state of Mecklenburg-Vorpommern (for planning, feasibility, road order and design).

The 600m-long cable-stayed bridge is the one that crosses the Ziegelgraben with a minimum height of 42m and navigation spans of 198m and 125m. The aerodynamically shaped bridge deck (16m-wide superstructure) is supported by 32 cables (weighing 150t) in a harp configuration from a 128m-high, double-leg steel tower (850t). The structure contains nearly 25,000m³ of concrete and 7,000t of reinforcing steel. This section of the project has been dubbed the new ‘Gateway to Ruegen’.

Construction of the bridges started on 31 August 2004. The main contractor for the bridge project was Max Bogl GmbH & Co; this was originally a joint venture with Walter Bau AG but this company became insolvent at the start of 2005. The design of the bridges was carried out by Buro Keipke architects. The structural design was by Schussler Plan Ing GmbH. The structural analysis was by Schmitt Stumpf Fruhauf und Partner of Munich.

Ilsenburger Grobblech GmbH (ILG) supplied 3,050t of heavy steel plate for the pylons of the cable-stayed bridge. DWK Drahtwerk Koln GmbH a subsidiary of Saarstahl supplied the steel strands for the stay cables for the Ziegelgraben Bridge. SUSPA-DSI GmbH of Germany supplied and installed 150t (3,360m) of stay cables including 64 DYNA Grip Anchorages DG-P 37. This system allows individual strands to be replaced if required without compromising the stay cable.

The stay cables consist of bundles of 34 high-grade, multiple corrosion-protected individual pre-stressed strands bundled into a 180mm-diameter HDPE (high density polyethylene) sheathing. Pump equipment for use in piling was provided by Tsurumi Europe GmbH (two KTZ411 units). Piles (3,500 to sheet piles and 11,000m of drilled piles) used for foundation and ground stabilisation were 900mm in diameter and 50m deep. Pumps were used to remove excess water and concrete produced during piling.

The cable-stayed bridge incorporates a number of innovations for German bridge building. These include the stay cables made from parallel pre-stressed steel strands, self-compacting concrete, wind-shielding walls and high containment guardrails.

The feeder road from the A20 to Ruegen Island will be 54km long and consist of three sections. The mainland section has a length of 28.6km and runs between the motorway junction at Stralsund (A20) and the junction at Ruegendamm railway station, including the Stralsund bypass.

“The cable-stayed bridge incorporates a number of innovations for German bridge building.”

The second Strelasund crossing has a total length of 4.7km and this includes a 0.6km section of the B96 federal highway up to the Altefaehr junction. The Federal Government is investing around €125m in this section between Ruegendamm station and Altefaehr. Finally, there is a 20.5km section on the island of Ruegen between the junctions at Altefaehr and Bergen. The landside section (€74m) between the A20 motorway and the city of Stralsund has been open to traffic since the end of 2004.

Construction work on the B96n Federal highway sections on the island of Ruegen started in 2007. This will run parallel to the old route and work involves four junctions, 12 viaducts and two motorway bridges. The new road system will encourage tourism as well as form an important link for the port industry in Sassnitz and Stralsund. Total cost is €354m, €172m of this coming from the EU.