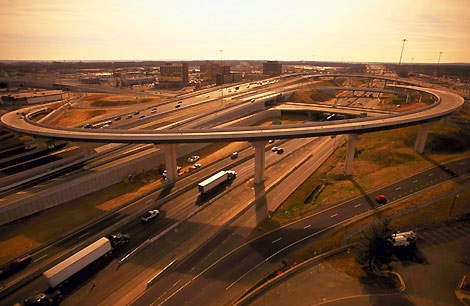 The Springfield Interchange (or 'Mixing Bowl') Improvement is an eight-year, seven-phase construction project that began in March 1999 and is on schedule for completion in 2007. 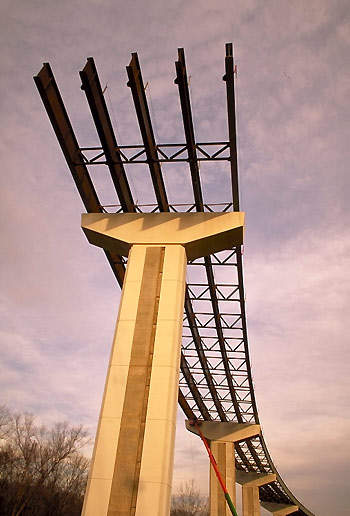 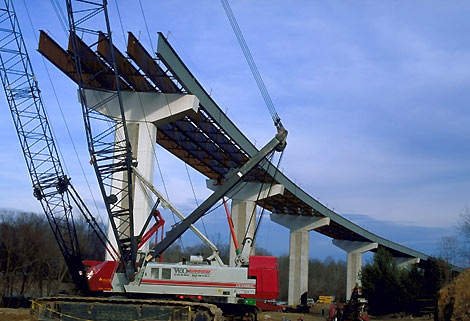 Phase 1 of the project involved adding a fourth lane to the I-95 south between Springfield and Newington and constructing a new exit ramp to Spring Mall Drive on I-95 north. 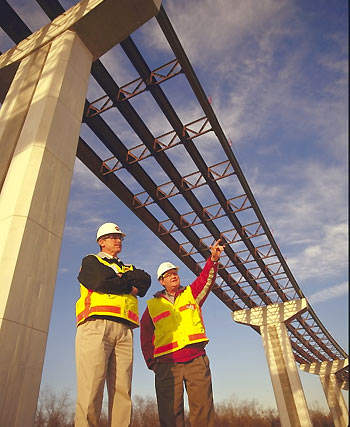 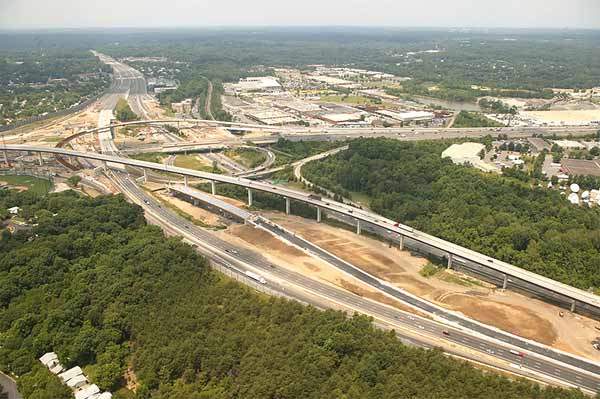 The areas to the southwest and northwest of the Springfield Interchange are being expanded to make way for additional lanes. 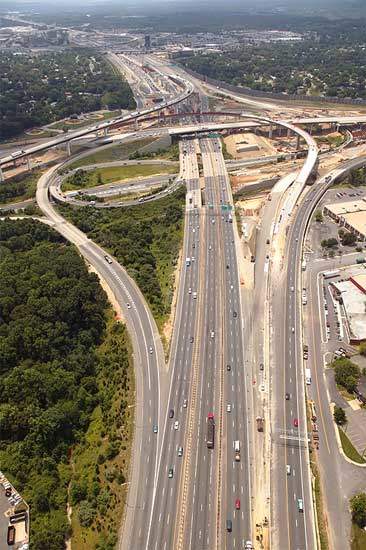 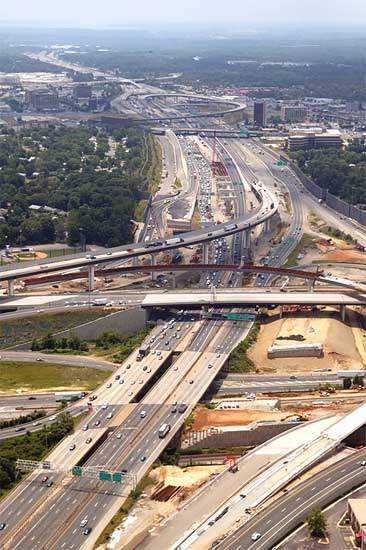 The major part of Phase 4 is a 4,800ft bridge that will link I-495 to I-95, allowing traffic heading west on the former to merge with southbound traffic on the latter.

The Springfield Interchange (or ‘Mixing Bowl’) Project was an eight-year, seven-phase construction project that began in March 1999 and completed in July 2007, as scheduled.

430,000 vehicles per day pass through the Springfield Interchange, a meeting point of I-95, I-395 and I-495 interchange. One of the most dangerous accident hotspots on the Capital Beltway, the interchange, has logged 179 accidents over a two-year survey period. The project has added more than 50 new bridges and widened Interstate 95 to 24 lanes around the interchange.

The improved interchange will allow for the projected traffic volume of 500,000 vehicles per day by 2020.

Virginia Department of Transportation (VDOT) awarded the contracts for the $676m interchange, for which general management has been undertaken by Bechtel Infrastructure Corp and Dewberry Davis, LLC.

Over $28m of the total budget for the Springfield Interchange Improvement Project was spent on Congestion Management Plans (CMP) to help motorists during their daily commute. Commuter stress was kept to a minimum throughout the disruption by improving highway routes around the interchange and increasing the capacity and regularity of park-and-ride and light-rail alternatives.

Phase 1 of the Springfield Interchange Improvement Project involved adding a fourth lane to the I-95 south between Springfield and Newington and constructing a new exit ramp to Spring Mall Drive on Interstate 95 north. These measures were designed to ease traffic flow during construction. These were all completed by June 1998 at a cost of nearly $3m.

Commerce Street was widened to four lanes and features a new bridge, the I-95/Route 644 interchange was rebuilt and a third southbound turn-lane was added on Loisdale Road to Newington. Lastly, the Veterans Bridge on Amherst Avenue was rebuilt.

Commerce Street was widened to four lanes and now features a new bridge, the I-95/Route 644 interchange has been rebuilt and a third southbound turn-lane has been added on Loisdale Road to Newington. Lastly, the Veterans Bridge on Amherst Avenue has been rebuilt.

These contracts, awarded to Shirley Contracting Corporation for a total of $90m, entailed building 15 new bridges and widening four miles of arterial roads at Interstate 95’s intersection with Route 644, just south of the I-95/I-395/I-295 interchange. These two phases were completed ahead of the scheduled June 2002 completion date at a total cost of $133m.

Phase 4 construction began in November 2000 and was completed by October 2004 at a cost of $178.5m. The major part of Phase 4 was a 4,800ft bridge that links I-495 to I-95, allowing traffic heading west on the former to merge with southbound traffic on the latter.

The bridge is 120ft high at the centre and features soundwalls (as high as 44ft in some places) along Cabin John Road. Resting on caissons of up to 40ft deep, the bridge is made of 125ft-long steel beams. Over 150,000m³ of unstable clay was removed from the site and 300,000m³ of fill brought in, which, along with 70ft-high earth walls, stabilised the structure.

For some soundwalls, VDOT used ‘whisper walls,’ an 11-year-old system utilising recycled rubber tire chips, supplied by Concrete Precast Systems. Also, as part of Phase 4, the areas to the southwest and northwest of the interchange were expanded to make way for additional lanes and part of the Beltway’s outer loop was shifted north over I-95 and raised higher to allow new bridges and underpasses, built during phases 6 and 7.

The Capital Beltway was widened between Interstate 395 and Van Dorn Street, including the addition of a lane on the inner loop for traffic heading to Interstate 95 south or Springfield and acceleration lanes on the outer loop for traffic heading from I-95 north to the Wilson Bridge. This involved the expansion of the bridge over the railroad lines near Van Dorn Street. Shirley Contracting Corporation was the prime contractor on Phase 4.

“Over $28m of the total budget for has been spent on congestion management plans.”

Three bridges on Interstate 495 west of the Mixing Bowl and the I-495 itself were widened between Interstate 395 and Heming Avenue. The expanded I-495 separates local and long distance traffic to eliminate the merging and weaving motorists were previously faced with.

The ramp from the I-395 south to the I-495 west was realigned to make way for new lanes and bridges to be built in Phases 6 and 7.

Phase 5 started construction in August 2001 and was completed by May 2004 at a cost of $95.5m. Lane Construction Corporation was the prime contractor on Phase 5.

Results of phases 4 and 5

The completed result is the high-speed two-lane continuous movement for southbound I-95 through traffic flowing from the Beltway to Shirley Highway; the relegation of the original semi-directional ramp that handled that I-95 movement, to serve local traffic heading to exiting at the I-95/VA-644 interchange; and completion of much of the construction on portions of the Beltway and Shirley Highway that were part of this project but out of the immediate I-95/I-395/I-495 interchange area..

Phases 6 and 7 saw the complete construction of the I-95 north as well as the renovation, realignments and reconstruction of all remaining local and through-traffic ramps and High-Occupancy Vehicle (HOV) lanes. Phase 6 and Phase 7 mainly focused on the remainder of the I-95/I-395/I-495 interchange, mainly the elevated ramps, but also included the remainder of the northbound I-95 roadway south of I-495.

Both phases 6 and 7 were constructed in one contract; the Commonwealth Transportation Board had awarded the $99.8m contract in September 2003, to Archer Western Contractors Ltd, and completion was planned in July 2007. The budgeted cost for the contract was $123m, which included the award amount plus contingencies and construction engineering.

The project originally had a phase 8, but it was deferred from the project in 2001. It would have provided ramp connections between the Shirley Highway HOV lanes, and the inside of the Capital Beltway roadways.

In the current set up, HOV traffic on Shirley Highway that is bound to/from the Beltway has to use 1.5 miles of Shirley Highway general-purpose lanes to connect to the Beltway. The necessary right-of-way was acquired, but phase 8 was left out for cost reasons, as it was projected to cost about $80m.

The official VDOT comment was that phase 8 had been transferred to the Capital Beltway Project, which is currently in the alternatives analysis stage, evaluating various widening schemes that include HOV lanes.