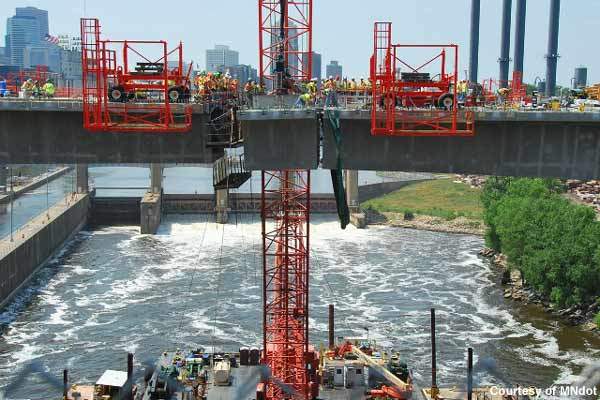 The St Anthony Falls Bridge was completed ahead of schedule. 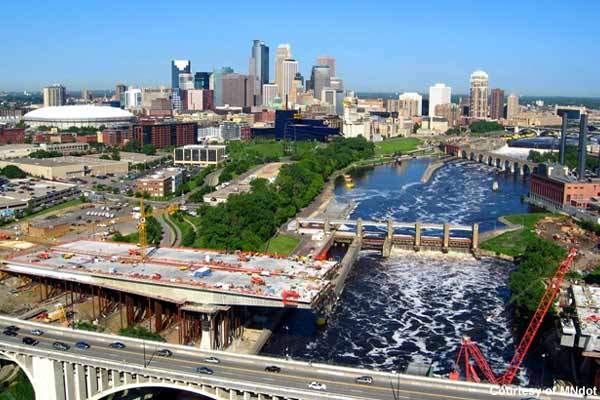 The bridge has ten traffic lanes. 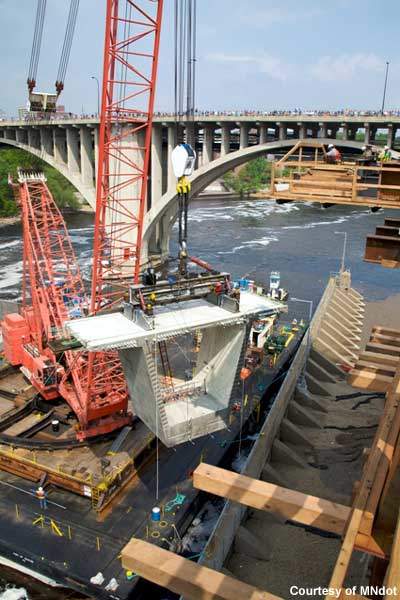 The I-35W Mississippi River Bridge collapsed in the summer of 2007, killing 13 people and injuring 1,000. The bridge was constructed in 1967 and carried up to 67,000 motor vehicles a day on two lanes in each direction. However, by 1988 the shoulders of the bridge were made into traffic lanes, creating four lanes on each side. By 2004, 141,000 vehicles were making daily crossings. Despite regular engineering examination and maintenance, 16 fractured gusset plates in the centre span were not detected, contributing to its collapse. Due to the collapse of the bridge, the state was losing revenue of $400,000 every day.

The St Anthony Falls Bridge cost approximately $234m to build and Flatiron Constructors Inc (a subsidiary of HOCHTIEF) and Manson Construction Company were awarded the contract. The lead designer for the project was Figg Engineering. The timeline was paramount, with financial penalties in place of around $200,000 per day for failing to meet the 24 December finish date (conversely there were also incentives for early completion of up to $27m). After completion of the project, the joint venture earned $25m as an incentive. The design chosen after a competition was for a pre-stressed concrete segmental box girder bridge with two different curved pier options.

Construction on the design-build-based project began in December 2007 with 400 day workers and 200 night workers working a dual 12-hour shift system. The halfway point of the project was reached in April 2008, three months ahead of schedule. The bridge is expected to have a 100-year life span. The pre-stressed concrete segments for the 504ft centre span were cast off-site and transported to the bridge site for placement. The bridge was constructed using high-performance concrete and post-tensioning steel tendons to tie segments together for increased durability.

“The structure is also a ‘smart bridge’, with 240 embedded sensors positioned at strategic points and a fully comprehensive monitoring system.”

Three land-based piers (four columns at each pier) of 70ft tall are built to hold the bridge. Construction work also involved the use of 120 precast segments with weight ranging between 170 to 210t each. It took 47 days to place all the 120 segments. The retaining wall has been built using locally available stones. A memorial was built for those who lost their lives in the collapse of the old bridge. The structure is also a ‘smart bridge’, with 240 embedded sensors positioned at strategic points and a fully comprehensive monitoring system. Four different kinds of sensors are used: accelerometers, chloride penetration sensors, linear potentiometers and wire strain gauges. Data is collected and analysed by personnel from the University of Minnesota. The bridge is decorated with multichromatic lighting for illuminating its superstructure at night. The bridge is also equipped with anti-icing sprayers and lit with blue light-emitting diodes.

The bridge has ten traffic lanes (five in each direction) and provision has been made for future light rail transport. The bridge is 189ft wide, 1,216ft long and the height above the river surface is 120ft. Right and left shoulders of the bridge have a width of 13ft and 14ft.