Length of side spans

51m (including 14m gap between the two carriageways)

Deck of side spans

Concrete below level +175m and concrete with stainless steel skin above 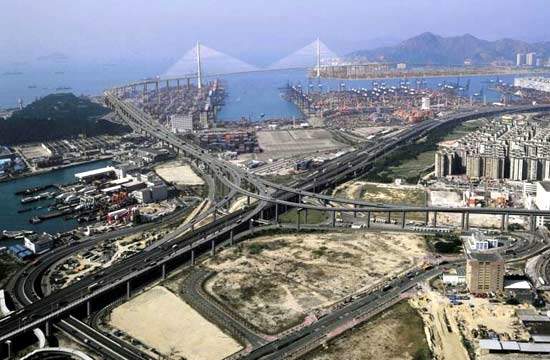 The Stonecutters Bridge, when completed, will be a major new landmark for Hong Kong.

The chosen design was for a cable-stayed bridge with a twin aerodynamic deck suspended from two 290m-high single pole towers. 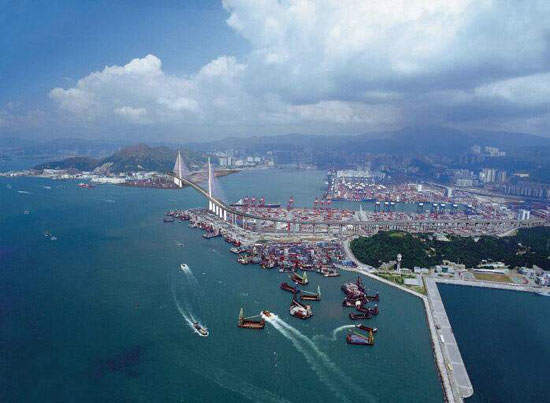 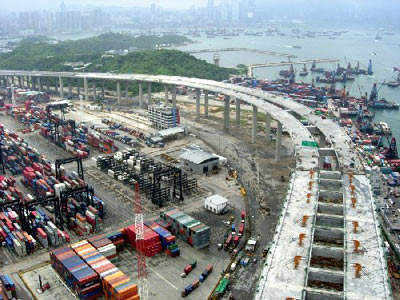 The bridge forms a vital part of Route 8 in Hong Kong. 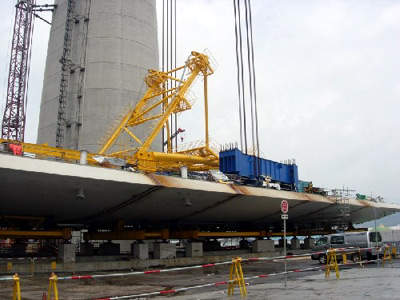 The top of the tower is clad with stainless steel 20–30mm thick. 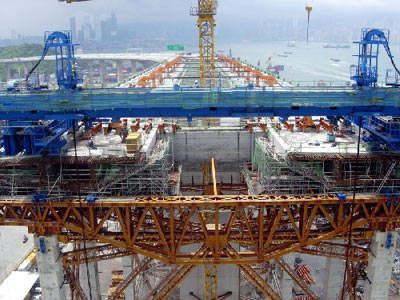 Construction of the deck is proceeding and the bridge should be completed by 2009. 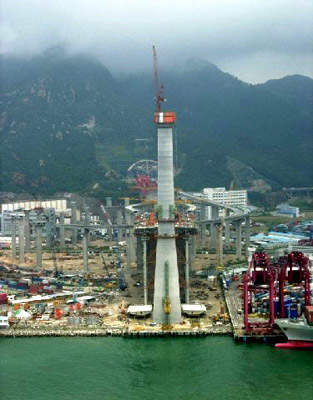 One of the towers under construction.

Work on the Angchuanzhou Bridge, otherwise known as Stonecutters Bridge, commenced in 2004 with the contract awarded in April. The work was completed in 2009 making the bridge one of the longest of its type in the world, with a span of 1,018m and an overall length of 1,596m. Straddling the Rambler Channel at the entrance to the busy Kwai Chung Container Port, it forms part of Route 8 which links Tsing Yi and Cheung Sha Wan.

The design concept for the bridge was procured by Highways Department in Hong Kong through an international design competition and the winning scheme by a group consisting of Halcrow Group, Flint & Neill Partnership, Dissing + Weitling and Shanghai Municipal Engineering Design Institute was selected as the Reference Scheme for the further design development. A group led by Ove Arup & Partners with COWI Consulting Engineers A/S and BMT Asia Pacific Ltd as sub-consultants carried out the further design development of the Reference Scheme (RS) and the detailed design that followed.

In 2004 the US$350m contract to construct the bridge was awarded to the international consortium Maeda-Hitachi-Yokogawa-Hsin Chong Joint Venture (MHYHC).

“Nippon Steel of Japan supplied the cable stays for the bridge which were first tested by CTL Group.”

Nippon Steel of Japan supplied the cable stays for the bridge which were first tested by CTL Group. The longest stay cables supporting the bridge superstructure are more than 670m (2,198ft) long. The testing programme began in October 2005 and continued through the middle of 2006. The test programme was conducted in accordance with the SETRA/CIP recommendations on cable stay design and construction, and included fatigue tests, tensile strength tests and a first-of-its-kind cable corrosion protection system aging and watertightness test. The cables consist of parallel 7mm galvanised wire with HiAM anchorages, and they range in size from 187 to 421 wires.

Maunsell AECOM was appointed by MHYHC as a consultant on the construction.

The concept was for a cable-stayed bridge with a twin 53m-wide aerodynamic deck (split into two steamlined boxes connected by cross girders) suspended from two 300m-high concrete and stainless steel single pole towers. These towers have bases measuring 24m x 18m tapering to 7m diameter at the top, and the deck allows a navigation clearance of 73.5m over the full entrance to the Container Port.

The two towers are in concrete until level +175m and in composite construction consisting of an inner concrete ring with a stainless steel skin for the top 120m. The original concept had a conventional steel structure above level +175m but Arup found that this configuration would be too lively and lead to unacceptable vibrations of the stay cables.

Using a heavier composite section instead of a pure steel structure solved this problem. For reasons of durability and to enhance the appearance, further studies concluded that the tower skin should be fabricated from a duplex stainless steel (grade 1.4462 to BSEN10088) with a shot peened surface finish. The deck itself is made of steel in the main span and of concrete in the side spans.

The tower foundations are located within 10m of the seawall on either side of the Rambler Channel, close to the back-up land next to CT8 and CT9. Their proximity to the channel necessitated ship impact testing and modelling. Geotechnical centrifuge testing was conducted using a 1:200 scale model of a vessel bow section and seawall within a container.

“The bridge is a major component of the $17bn Route 9 that runs from Tsing Yi to Cheung Sha Wan.”

Arup chose to investigate the practically and suitability of using stainless steel for such a large-scale application. The study led Arup to design and supervise the construction of a prototype fabrication that was representative of a typical section of the tower. The prototype was made in two halves, each approximately 1.75m high and 7m curved on plan – the two halves were connected by a bolted flange as is the actual structure. The fabrication also included roll forming plates to a conical shape, fabrication of typical details (including stiffeners and studs to the reverse face) and establishing the finish that was achieved by shot peening on a large fabrication.

The fabrication was undertaken by Ancon Building Products, Sheffield, the hot rolled steel plate were supplied by AvestaPolarit, with the roll forming being carried out by Barnshaw Bending and the surface finishing by Metal Improvement Company, Derby.

The prototype was completed successfully and was able to show the feasibility of fabricating the towers from stainless steel and of achieving an acceptable level of finish on hot rolled plate. Graham Gedge, a materials project manager for Arup who was the consultant on the project, said: “The key driver for considering alternative materials for the upper tower skins was the need to provide a long-term maintenance-free life of 120 years, and this would not have been possible with structural steel.”

The Hong Kong region is susceptible to very strong typhoon winds, a fact that was taken into account in the design of the bridge. In October 2002 a 50m mast was erected at the site to measure the speed, direction and turbulence of winds in the area. Readings, which continued until January 2004, were transmitted in real-time to an offsite location for further analysis.

In particular, the stability of the 509m-long cantilevers during construction required special consideration in the design. The Hong Kong design standards contain severe requirements for wind loading. It was essential for a project of this scale and nature that the wind climate of the actual site was taken into account in the design.

The bridge is a major component of the $17bn Route 9 that runs from Tsing Yi to Cheung Sha Wan and connects the island of Tsing Yi and Kowloon. Also, along with the other two major elements of the route (Ngong Shuen Chau Viaduct in the east and Nam Wan Tunnel in the west respectively) it will form a strategic link, providing a relief route to the existing Route 3 between Tsing Yi and Kwai Chung Section.