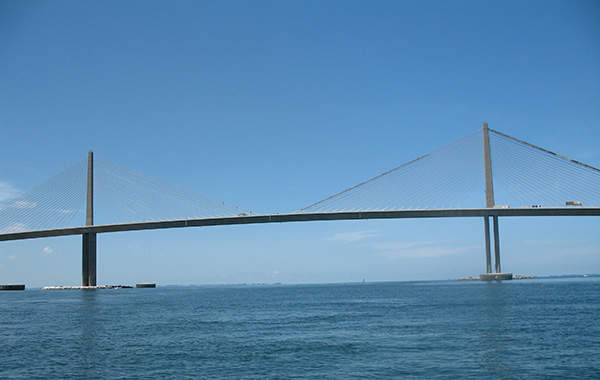 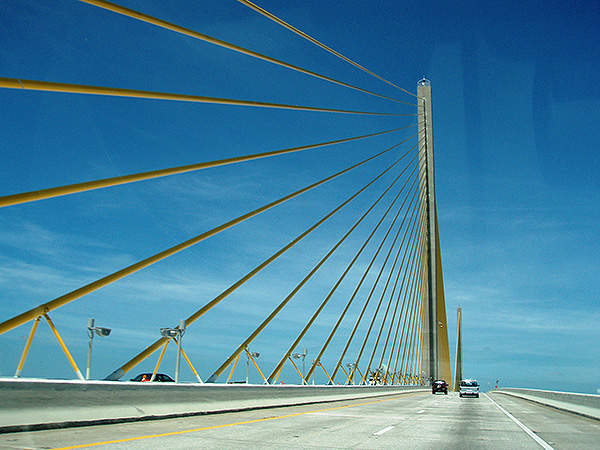 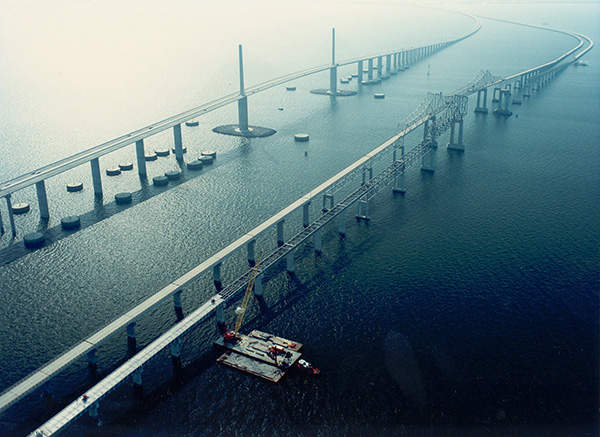 The existing structure replaced an older bridge built in 1954. Image courtesy of Apelbaum.

An estimated 59,000 vehicles use the bridge, which is operated by the Florida Department of Transportation, every day.

The original Sunshine Skyway, with a vertical clearance of 150ft and a channel clearance of 864ft, was a cantilever bridge constructed in 1954 at a cost of $22m to address an increasing number of vehicles using the Bee Line Ferry to cross Tampa Bay.

By 1971, traffic increased rapidly necessitating the construction of a southbound span. Construction commenced in 1967 and was completed in 1971, at a cost of $25m. The span carried southbound traffic, replicating the northbound span, which was built in 1954.

In 1980, a freighter named MV Summit Venture struck the southbound span. The collision destroyed most of it and caused the death of 35 people. Following the accident, replacement or repair of the bridge was contemplated.

The Interstate 275 was being built through St. Petersburg during the 1980s. The Sunshine Skyway Bridge was initially planned to be excluded from the interstate. Inclusion of the bridge was, however, considered essential as the amount of traffic using the bridge had greatly increased.

Since both the spans built in 1954 and 1971 were not of interstate standards, a decision to replace the bridge was made. Construction commenced in 1984 and was finished in February 1987.

The low-level twin trestles have a total length of 13,000ft and are made of 100ft spans of precast pre-stressed girders. A total of 256 spans with five girders form the low level trestles.

“Opened in April 1987, the Sunshine Skyway Bridge was built at a cost of $244m in place of an older bridge that was partially destroyed in 1980.”

The high-level approach spans, made of 584 post-tensioned segmental box girder segments totaling 18 spans, have a total length of 5,000ft and are located on either side of the bridge.

The main span comprises two towers located in the centre of the bridge, which is supported by 42 continuous stay cables with 21 located on either side, sheathed in 9in diameter steel pipes. The 40ft-wide roadway on the main span is made of over 300 precast concrete segments.

Following the accident in 1980, ensuring the safety of the new bridge was a big priority. The shipping channel of the bridge was increased by 50% to ensure safety, while six dolphins, which are designed to withstand the impact of an 87,000t ship surrounding the bridge’s piers, were built to protect it. The bridge was painted bright yellow to represent the sunshine state of Florida.

The Skyway Bridge is currently undergoing routine repairs. The maintenance activities began in June 2019 and are expected to be completed in fall 2020.

Figg & Muller Engineers designed the main span and high-level approach spans of the new bridge. The low-level spans were designed by Parsons Brinckerhoff, Quade & Douglas, the New York City and the FDOT Bureau of Structures Design.

Controlled Demolition, a US based company, was responsible for the demolition of the olde bridge.

Bridge Masters Construction was awarded a contract to handle the bridge repairs.