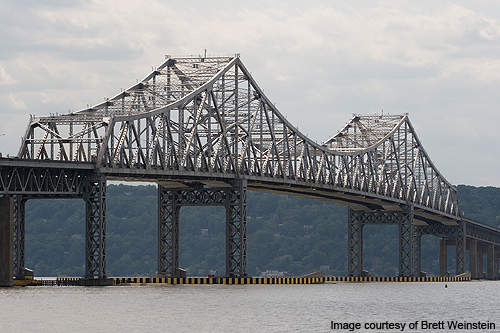 Tappan Zee is a cantilever bridge located in New York over the Hudson River. 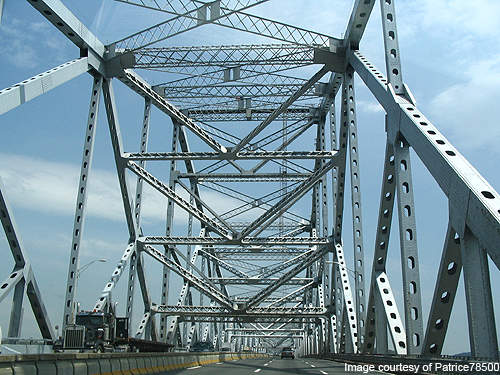 The three-mile bridge is one of the largest in the US.

The Tappan Zee Bridge is a cantilever bridge located over the Hudson River, about 21km north of New York City. The bridge carries the New York State Thruway and connects Rockland and Westchester Counties.

The bridge is a key lifeline for the commuters travelling between New York City and Upstate New York. Around 140,000 vehicles cross the bridge every day. The three-mile bridge is one of the largest in the US. The bridge features a total of seven lanes including three designated northbound and southbound lanes and a reversible lane.

Opened for traffic in December 1955, the Tappan Zee Bridge was designed with a capacity of 100,000 vehicles a day. The bridge has already exceeded its original capacity, peaking at 170,000 vehicles per day.

The bridge underwent several upgrades over the past 50 years to address the increasing traffic. The deteriorated structural deck and structural steel on the western part of the bridge necessitated the latest upgrade. The project also replaces the deteriorated concrete walkway, lighting and electrical equipment.

The original cantilever bridge design features a 1,112ft steel tied-arch span for the main channel of the Hudson River. The main span and two towers were built with two steel false-work structures.  The main span consists of cantilever spans of 340ft and a suspended span of 531ft and two 602ft side spans. Clearance at the centre over mean high water is 138.5ft.

A total of 19 deck truss spans are placed each side of the main and side cantilever span.

Each deck truss span measures 235ft – 250ft in length, 93ft in width and 28ft in depth. The bridge is based on the eight underwater concrete caissons. Two main towers of the bridge are supported by two large caissons of 100ft x 190ft. Two 77ft x 124.5ft caissons and four small caissons of 46ft x 100ft provide balance to the bridge.

The last deck replacement contract was awarded in 2006. It replaced about 40% of the entire deck including the west end of the bridge and the main truss. Other previous projects replaced 50% of the centre lane of the causeway and the entire east truss deck.

“The main span and two towers were built with two steel false-work structures.”

The most recent deck replacement contract was awarded in June 2010. It will replace about 28% of the total concrete deck area on the bridge.

The renovations will replace around 96% of the original deck. The contract will also involve replacement of the movable barrier and installation of additional safety railings. The deck replacement project is currently in its final stages. The new deck and improvements on the bridge will enhance the safety, convenience and service for commuters passing through the bridge.

The bridge deck replacement work commenced in July 2010 and is being carried out during off-peak, overnight shifts under the Accelerated Construction Technology Transfer (ACTT) initiative of the Federal Highway Administration (FHWA). The installation of the new deck panels began in Fall 2011.

The ACTT streamlines the project schedules, minimises traffic impacts and life-cycle costs while also enhancing safety and quality in the project. The prefabricated bridge elements and systems are built on-site or off-site and later transported to the site for installation. This innovative construction process largely reduces environmental impacts.

The deck replacement project is being funded by the New York State Thruway Authority as a part of its $2.1bn highway and bridge Capital Programme.

The Tappan Zee bridge has completed its life span and traffic capacity has reached its threshold. Proposals for the construction of a new bridge to replace this bridge were put forth to improve transportation facilities. The new bridge construction project, known as the New NY Bridge, officially started in October 2013 and is scheduled for completion in 2018. The investment on the new bridge is estimated at $3.9bn.

The project is being administered by the New York State Thruway Authority. The design-build contractor for the New NY Bridge Project is the Tappan Zee Constructors (TZC), which includes Fluor, American Bridge Company, Granite Construction, and Traylor Bros. The lead designer for the bridge is HDR.

The new cable-stayed twin span bridge is being built north of the existing bridge and will have a design life of 100 years. The project has so far generated more than 600 jobs and benefited more than 500 local companies.