70,000 vehicles in both directions 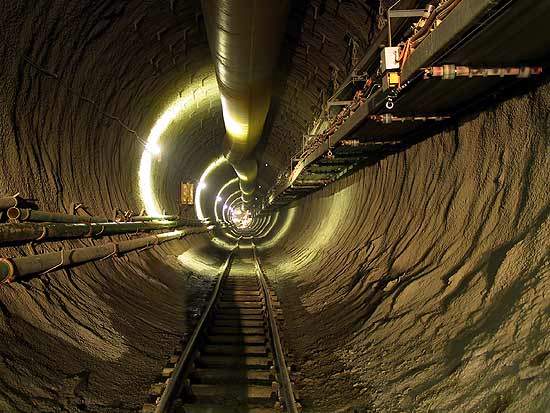 The Uetliberg Tunnel, part of the new N4 / N20 Zurich western bypass in Switzerland, is the largest tunnel and stretch of roadway of the bypass at 4.4km. 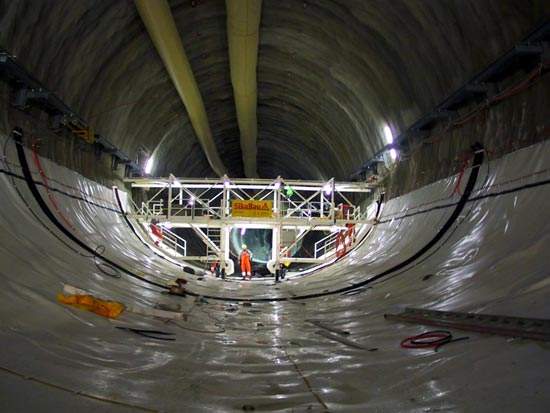 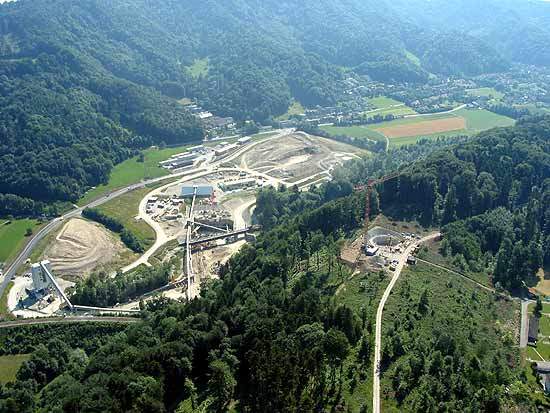 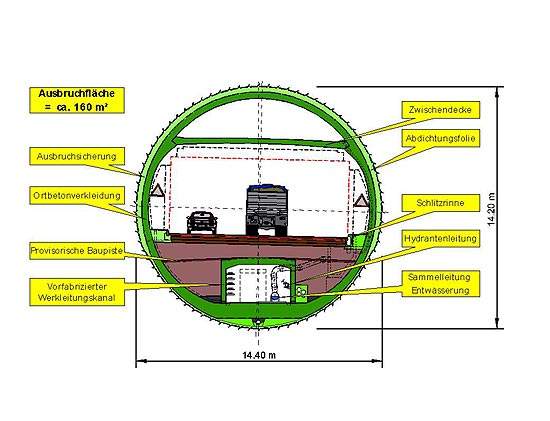 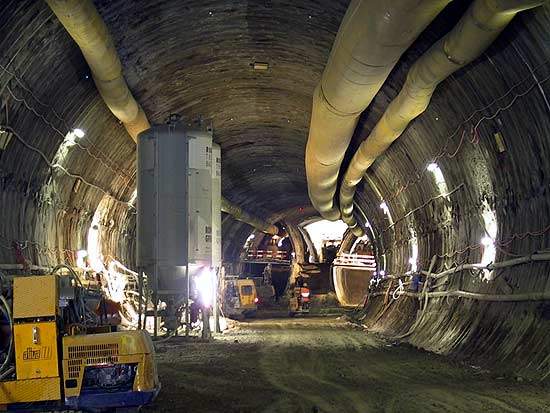 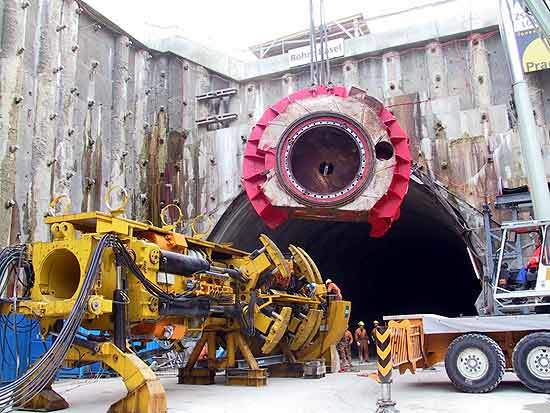 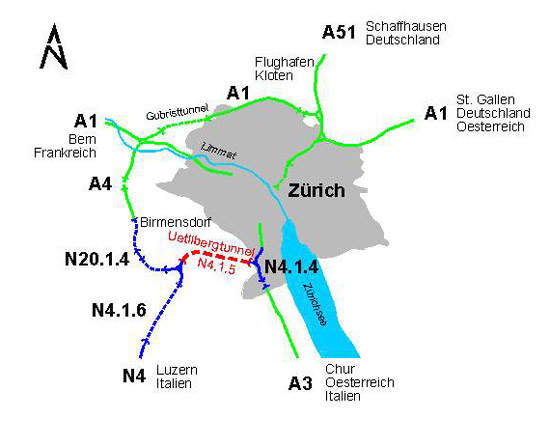 The Uetliberg Tunnel is part of the new N4 / N20 Zurich western bypass in Switzerland and is the largest tunnel and stretch of roadway of the bypass at 4.4km.

The tunnel represents one element in a large road transport project; it links the Birmensdorf bypass (N20.1.4) in the west with the existing Zurich-Chur motorway (the A3) in the east.

Completion of the Uetliberg tunnel filled a considerable hole in Switzerland’s road network and provided a quick, environmentally friendly and convenient traffic diversion away from the centre of Zurich.

Under the management of the Engineering Department of Canton Zurich, the Office of Civil and Underground Engineering, the National Highways department and Zurich / CH, the Uetliberg Tunnel project began in 2000 and design and planning started in 1982 in conjunction with Amberg Enegineering. The tunnel opened in May 2009. The per metre cost of the tunnel road was CHF37,000.

Project design and coordination as well as tunnelling and construction supervision was undertaken by Amberg Engineering, Regensdorf.

"The Uetliberg Tunnel’s main ventilation is in the Reppisch valley."

With two parallel tubes of the same length, each tunnel tube comprises two lanes and a hard shoulder (gradient 1.6%) with a total carriageway width of 10.5m.

On the straight, the camber is 2.5% and 5% on the bends. The tunnelling was carried out from two portals: Wannenboden in the west and Gänziloo in the east.

Operations in the northern tunnel of the western portal began after a five-week installation period. Pilot tunnel through a 2,800m section of the Uetliberg molasse was driven by a tunnel boring machine (TBM) with a 5m diameter. The TBM reached the oncoming excavation after seven months and was subsequently pulled back through the pilot tunnel to begin tunnelling on the southern tunnel.

The same TBM was later used to extend both tunnels to their final cross-sections of 14.4m using a Tunnel Bore Extender (tbe) with an under-cutting section, used for the first time in the world.

In the Eichholz and soft-ground sections there is a tunnel cross-section of 14.5m width and 12.50m height. Total excavation area was 143.3m². In these areas, the seal was pressure-maintained.

There are three main areas inside the tunnel cross-section: a road area, substructure featuring a service duct and exhaust air duct, housed in a false ceiling. Within the service duct, a hydrant pipe is housed, along with the main drainage pipe from the carriageway as well as electromagnetic equipment.

"The total cost of the Uetliberg Tunnel project is CHF1.12bn."

The tunnel cross-section consists of two lanes and a hard shoulder resulting in a total carriageway width of 10.5m. Tunnel camber is 2% on the straight and 5% on the bends. A 1m-wide verge is situated on each side of the carriageway as well as slotted channels for the drainage of the carriageway and the discharge of liquids following any accidents that occur.

The tunnel features cross-cuts every 300m connecting the two carriageway tubes. Every third cross-cut is accessible to vehicles. In addition, both tunnels have hydrant and SOS refuges at 150m intervals as emergency measures.

Ventilation at the Uetliberg Tunnel

The Uetliberg Tunnel’s main ventilation is situated in the Reppisch valley towards the western tunnel portal. The station is connected to an exhaust vent gallery via a vertical shaft which has an exhaust flue on the Ettenberg Mountain. The station was built by carrying out a cut and cover excavation, which was 230m long. The vent gallery has a cross-section of approx. 50m² and the vertical shaft a cross-section of 17m².

Using a system of longitudinal ventilation, the air flow was generated by a natural piston action created by moving traffic. Exhaust air can flow freely out of the portals at the eastern end of the tunnel. Due to environmental constraints, emissions must be eradicated at the western portal. This means that the exhaust from this side is collected by the Reppisch valley ventilation station and then removed via the exhaust air shaft.

In the event of traffic queues or fires, exhaust air is extracted via the false ceilings of either tunnel tubes and carried via the Reppisch valley ventilation station to the ventilation flue.

The TBM used in the Uetliberg molasses section of the tunnel had a diameter of 5m. In addition, a TBE was braced in the pilot tunnel and used to widen the pilot tunnel to the full cross-section diameter of 14.4m. Safety equipment, such as cable bolts, Swellex rock bolts, shotcrete and mesh were all used to secure the tunnel behind the boring head.

"The tunnel cross-section comprises two lanes and a hard shoulder resulting in a carriageway width of 10.5m."

Because of the size of the Uetliberg Tunnel, a large amount of spoil material was produced. This totalled around 1.7 cubic metres of solid spoil and mud material.

Over 70% of this was generated from the Reppisch valley cut-and-cover works.

These materials could not be reused at any point in the project, so they had to be removed from the site.

All spoil material produced by tunnelling in the soft ground was trucked to the Landlikon portal where conveyor belts carried it via a crusher plant.

Where the TBM was operating in the molasse sections of the tunnel, all spoil was taken straight from the working face via a continuous belt system 1,760m in length taking material to a rail loading area in the Filderen area. All spoil was taken to local gravel pits.

The water pressure-containing waterproofing system consists of a single, monitorable and injectable membrane layer with ‘Rückfallebene’ (second defence line). The waterproofing membrane was fastened by a VELCRO system.