Four (Two in Each Direction) 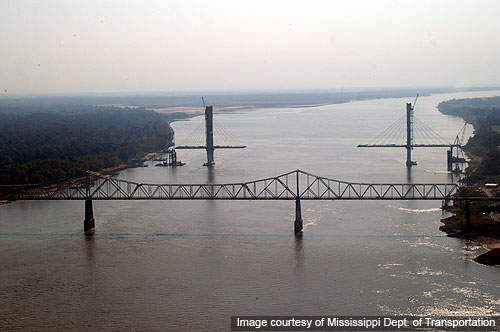 The old US 82 Greenville Bridge with the new bridge under construction in the background. 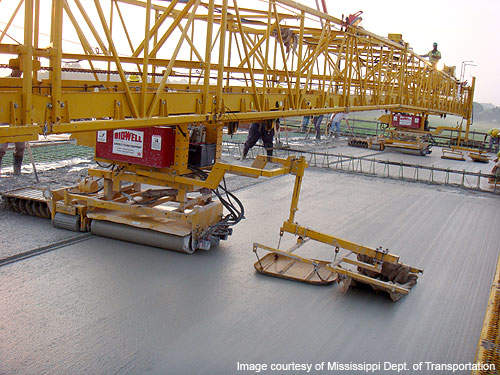 Construction of the deck being on the Arkansas Approach spans. 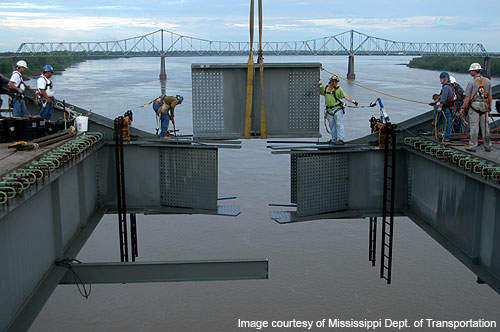 The US 82 Greenville Bridge connecting Mississippi to Arkansas in the US was opened to traffic in July 2010. It is one of the longest cable-stayed bridges built across the Mississippi River, the third longest in the US and the fourth longest in North America. Construction on the main span of the bridge started in 2001 and was completed in 2006. The whole project was completed at an investment of $336m.

The bridge is about half a mile downriver from the old Greenville Bridge, which was built in 1940. The old bridge, which cost $4.4m, was unable to meet increasing highway volume and river traffic. Ten years after its opening, the bridge was damaged by an aeroplane that crashed into it. More than 60 years later, the bridge was considered functionally obsolete, paving the way for the construction of the new bridge.

Funds for the construction of the bridge were provided by the federal and state governments.

The project included four sub projects: the construction of the Greenville Bridge, Arkansas Approach and Mississippi Approach, and the demolition of the 82 Bridge.

“It is one of the longest cable-stayed bridges built across the Mississippi River.”

The project was undertaken by a joint venture between Massman Construction and Traylor Brothers.

The 1.25 mile-long Arkansas Approach project is a four-lane roadway and conventional bridge segment connecting Highway 82 in Arkansas with the main span. Austin Bridge & Road managed the $66m project, which started in March 2006 and finished in 2010.

Similar to the Arkansas Approach, the 80 mile-long Mississippi Approach connects Highway 82 in Mississippi to the main span. The $86m project was carried out by a joint venture of Hill Brothers and Jensen.

The old bridge will be demolished once the traffic is shifted onto the newly built Greenville Bridge. The contract for the removal of the bridge was awarded to Granite Construction Company in October 2009 for a bid of over $22m.

Designed by Howard Needles Tammen and Bergendoff, the bridge is supported by two concrete columns (standing 130m above the Mississippi River) and four concrete piers (grounded 23m below the river). Four fans of pre-stressing strand steel cables have been fitted out to support the cable-stayed span of the bridge. The bridge has three spans of 108m, 420m and 108m.

The bridge has been designed to reduce the likelihood of barge collisions. The outside shoulder of the bridge is 3.66m in length while the inside shoulder is 2.44m.

“The bridge is about half a mile downriver from the old Greenville Bridge.”

The largest piers of the bridge, piers 37 and 38, were constructed by the Massman Construction and Traylor Bros joint venture. The river’s currents and floating drift effects were minimised by installing a sheet pile water deflector upstream of each floating caisson.

Floating caisson and open caisson construction methods were applied to build the piers.

A multi-dimensional hydrodynamic and scour potential study was carried out by WEST Consultants to deal with concerns such as eddying, drag on the downstream surface of the caisson and river bottom scour due to the installation of the water deflector.

Hydrodynamic facets of the caisson construction process were analysed using modelling techniques and theoretical concepts. Flow distribution between the main channel and the overbanks were estimated by applying one-dimensional HEC-RAS hydraulic model whereas the free-stream local velocities upstream of each pier were found by using the two-dimensional finite-element RMA2 model of the Mississippi River main channel.