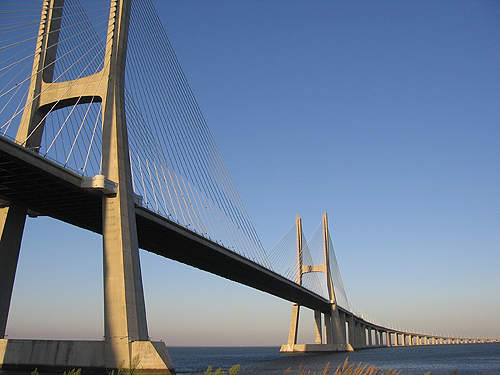 Construction of the Vasco da Gama bridge was completed quickly so that access to Expo '98 would be easy.

The Tagus is the longest river on the Iberian Peninsula. 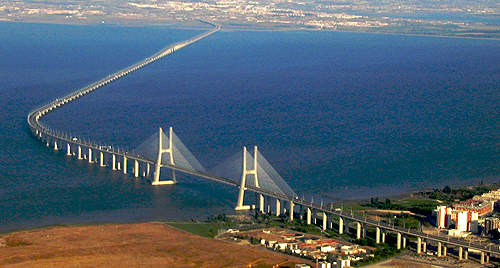 The Vasco da Gama Bridge is a cable-stayed bridge that traverses the River Tagus, near Lisbon in Portugal.

The Vasco da Gama Bridge is a cable-stayed bridge that transverses the River Tagus in Portugal. It was the second crossing built across the river.

The Portuguese Government decided there was a need to build a second crossing across the River Tagus in 1991. An inter-ministerial agency called Gabinete para a Travessia do Tejo em Lisboa (GATTEL) was formed to make a decision on the location of the new crossing and to make it possible to construct, finance and operate the crossing as a private concession. The agency was chaired by the Ministry of Public Works.

In April 1994, Lusoponte, a consortium of Portuguese, British and French companies, won the tender to build the Vasco da Gama Bridge. Construction began in February 1995 and the bridge opened on 29 March 1998.

The bridge was completed quickly so that access to Expo ’98 would become easy. Expo ’98 was held to celebrate the completion of 500 years of the discovery of a sea route between Europe and India by Vasco da Gama.

“Lusoponte won the tender to build the Vasco da Gama Bridge in 1994.”

The cable-stayed bridge has a central span of 420m and side spans of 203m. The height of the central towers is 150m. The deck of the bridge has a height of 47m from the water.

Lusoponte formed a consortium led by Campenon Bernard SGE in a joint venture with Novaponte and ACE. The consortium was given the responsibility of designing and constructing the main bridge structure and its access branches.

Each company was given a section of the bridge to design. A team made up of representatives from each of the four companies coordinated the design work for each section. The designs were verified by Tejo Ponte Control, a consortium of A2P Consult, Estudos E Projectos, Hyder Consulting, Provia Consultores de Engenharia and Tudor Engineering.

The entire construction of the Vasco da Gama bridge was split into seven sections including the Sacavem and EN10 Variant Interchanges, the North Viaduct, the Expo Viaduct, the main bridge, the central viaduct, the South Viaduct and the South Access.

The Sacavem and EN10 Variant Interchanges were managed by H Hagen, Bento Pedroso Construcoes and Teixeira Duarte. The interchanges provided access to Lisbon and the Expo ’98 site.

“Works on the 488m-long North Viaduct were managed by Teixeira Duarte.”

Works on the 488m-long North Viaduct were managed by Teixeira Duarte. Campenon Bernard SGE managed the works on the 672m Expo Viaduct.

The works on the concrete main bridge, which has a central span of 420m and side spans of 203m, were managed by Campenon Bernard SGE.

The South Viaduct works were carried out by Somague. The 3.9km South Access works were managed by Mota & Companhia.

The traffic control room located in the Toll Plaza building manages the traffic on the Vasco da Gama bridge. Patrol vehicles, the traffic management system and the police and emergency services assist the control room staff to solve any incidents occurring on the bridge.

Lusoponte / Gestiponte built a permanent police post on the bridge. The post is operated by the GNR-BT.

Lusoponte / Gestiponte and the GNR-BT supervise the bridge and the access branches using 87 video cameras. Monitors in the control room and police post display the images captured by these cameras.

Some of the other traffic management Systems include an Automatic Incident Detector (DAI) which indicates to the operators whether there is a traffic jam or not; 73 emergency telephone posts installed in both directions along the bridge and access branches, and linked to the traffic control room; and portal fames with traffic lights and eight variable speed panels.

The Vasco da Gama bridge project cost €897m ($1,285m) and was financed by the private sector. The funding was processed under a build-operate-transfer arrangement.

Other sources like shareholders and government grants funded €229m. Approximately €50m came from the toll collected at the 25 Abril Bridge.