40km of four-lane motorway, with capacity for expansion

Construction of twin 3.4km two-lane tunnels, with three lanes in large sections, will start in 2003 and is expected to take three years and cost AU$815 million 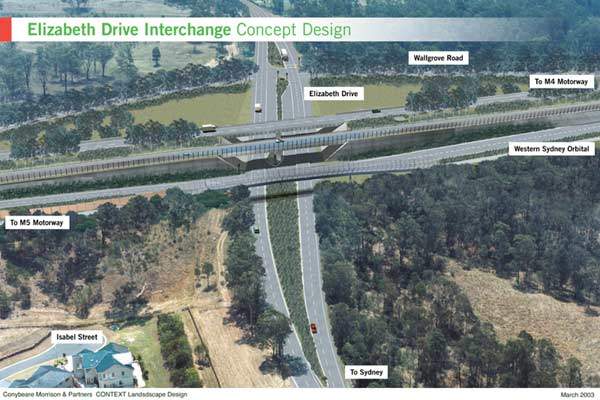 The concept design of the Elizabeth Drive interchange. When completed, the Westlink M7 will have 18 interchanges. 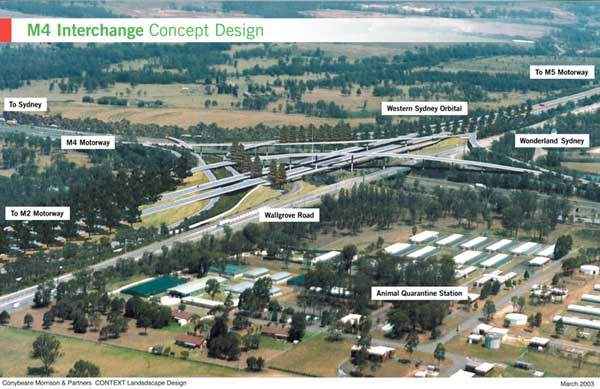 The Westlink M7 will link the M2, M4 and M5 and allow drivers to bypass more than 30 sets of traffic lights.

The 40km Westlink M7 (previously known as the Western Sydney Orbital) is Australia’s biggest urban road project. The road was delivered as a Build / Own / Operate / Transfer (BOOT) scheme.

The WestLink consortium was selected to design, construct, maintain and operate the Westlink M7 for a total of 34 years, after which it will be transferred back to the Australian Government.

Westlink M7 Shared Path improvement works consisting of up to three separate stages was started in August 2010. The improvement works include drainage works, concrete works and asphalting of the existing 40km-long shared path that stretches from Prestons to Baulkham Hills. The project, which is being undertaken by Abigroup Leighton Joint Venture, is estimated to be completed within 12 months.

At the end of 2003, construction activity occurred along most of the corridor. Key activities included:

A number of associated roads were also upgraded as part of the project. The Westlink M7 opened to traffic on 15 December 2005, ahead of the previously expected completion date of 2007.

The same basic design was used for these elements along the length of the motorway to create a ‘linear identity’. For other features it was important to respond to the immediate environment, which varied along the Westlink M7 route. Key features tailored to the local environment include:

The motorway links the M2, M4 and M5 motorways saving motorists significant amounts of time. It links the M5 at Prestons in the south with the M4 at Eastern Creek and the M2 at West Baulkham Hills in the north.

18 interchanges along the motorway provide access to the communities of Liverpool, Fairfield, Blacktown and Baulkham Hills, improving transport options to these areas.

Motorists on the Westlink M7 are now able avoid up to 48 sets of traffic lights on the trip from the M2 at Baulkham Hills to the M5 at Prestons.

The motorway boasts Australia’s largest interchange, where the Westlink M7 intersects with the M4 Western Motorway. This is the Light Horse Interchange (named after the Australian Light Horse that fought at Gallipoli in the First World War and had a training base at Walgrove Road – here the M7 crosses above the Walgrove bridge).

The Light Horse Interchange allows motorist access to the Westlink M7 from the M4 Motorway in all directions without having to stop at traffic lights. The interchange features three levels of on and off ramps allowing motorists to safely and easily travel between the two motorways.

The Light Horse Interchange was designed by Maunsell / Smec for the civil structural design and Conybeare Morrison / Context for the urban design and landscaping.

There are no toll booths on the Westlink M7. Instead, electronic tolling allows drivers to use the motorway without slowing or stopping to pay tolls.

Motorists can either get a tag for their car in advance or can arrange to pay for their trip via the e-pass system either in advance or within 48 hours of travelling. If they use the road without paying they will already have been photographed and will be fined.

Scanning equipment is mounted at points along the road corridor, either on special gantries over the roadway or, where possible, on existing or future overpass structures, allowing different toll levels to be charged depending on the length of the route used. The toll was set by a contract signed between Westlink and the NSW RTA in 2003.

“electronic tolling allows drivers to use the motorway without slowing or stopping to pay tolls.”

Other advantages of the electronic tolling include being able to charge different tolls for heavier vehicles, varying tolls depending on the time of day and integrating the road with the city’s existing motorway toll system.

The equity investors in the WestLink consortium are Transurban, Macquarie Infrastructure Group, Leighton Contractors (a subsidiary of HOCHTIF) and Abigroup Contractors.

The RTA coordinated the project’s development, environmental assessment and planning approval phases. During the implementation phases the RTA administered the project deed and ensured that the consortium delivered the Westlink M7 according to the agreed scope and approval conditions.

The project’s environmental impact statement went on public exhibition from 8 January to 5 March 2001. On 28 February 2002, the NSW Minister for Infrastructure and Planning approved the project.

In February 2003, the WestLink Motorway consortium entered an agreement with the RTA to finance, design, construct, operate and maintain the AU$1.5bn Westlink M7 motorway. The Federal Government contributed AU$356m towards the construction of this link, with the remainder of the cost being met by the private sector.

The WestLink consortium was given the ‘Project Finance Deal of the Year’ award by Australia’s ‘CFO’ magazine in July 2003.