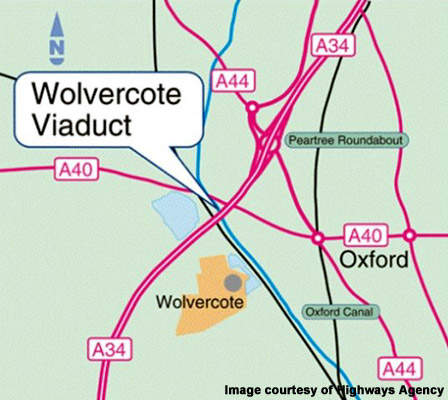 The A34 Wolvercote viaduct is being replaced. 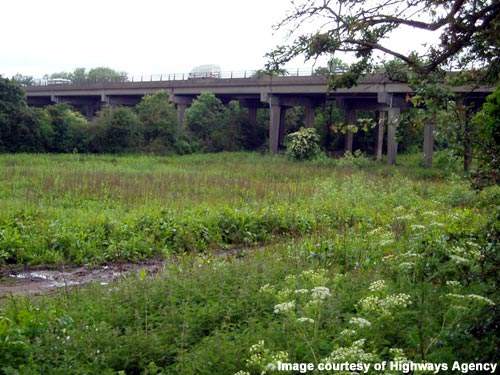 The viaduct was built in 1961 and now it will be cheaper to replace it. 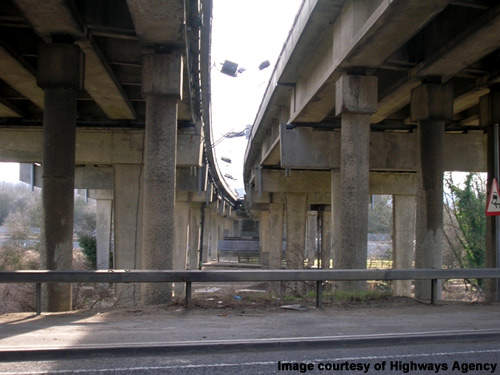 The A34 is one of the major transport routes from Southampton to the Midlands.

The new viaduct will be wider to satisfy new safety regulations.

The A34 is an important road in England that runs between the A33 and M3 in Hampshire. The Wolvercote Viaduct is a major structure on the A34 dual carriageway trunk road, which runs from the A6042 in Salford to Winchester in Hampshire via Oxford, Birmingham and Manchester. The road is one of the most important routes for the carrying of freight from the container port of Southampton to the Midlands. The existing Wolvercote Viaduct carries the A34 (Oxford Western Bypass) over the River Thames flood plain, the Oxford to Birmingham main line railway, the Oxford Canal and the A40 Oxford to Cheltenham road. The Highways Agency had been carrying out remedial work on the 47-year-old viaduct to repair water damage, but in 2006 it reached the conclusion that it would be more cost effective to replace the structure.

The £44.4m viaduct replacement project began on 6 May 2008. The replacement viaduct is designed to last 120 years. One of the major problems in executing the project was that the A34 had to be kept open to traffic for the majority of the time.

In the first phase of the construction project a temporary southbound bridge deck was built to the east of the old viaduct so that traffic could be diverted while the new viaduct was constructed. This meant some overnight closures along with the formation of narrow lanes for 500m in both directions throughout the project. The A40 under the viaduct also had two narrow lanes and temporary peak time traffic lights.

"The road is one of the most important routes for the carrying of freight from the container port of Southampton to the Midlands."

The project also involved improvements to the south-facing slip roads at the Peartree interchange, enabling better access to the A34.

Tenders were invited for the replacement project in February 2006. In July 2006 Costain, along with Jacobs as the designer, were appointed under the Highway Agency’s Early Contractor Involvement (ECI) initiative to carry out the scheme from planning to construction. Cass Hayward of Chepstow was also part of the ECI contractor team for the project. The project used durable techniques to minimise future maintenance and also ‘low noise’ tarmac to make the road surface quieter for the nearby residents.

Bachy Soletanche was subcontracted to carry out pilling works. The pilling works were carried out in three stages over a period of two years.

Dorman Long Technology was responsible for supplying a hydraulic lifting and skidding system. The system was used to slide the bridge into the final position.

WSP acted as the technical advisor for the project.

The old viaduct was surrounded by a rich landscape and Costain had to produce a construction environmental management plan that detailed strict guidelines during the period of construction and also remedial works to restore the landscape. To help blend the viaduct into the surrounding landscape a full planting programme using native species was carried out, including the reinstatement of any landscape lost during the project. In addition, a drainage system for the viaduct runoff water was designed, which will have minimal environmental impact.