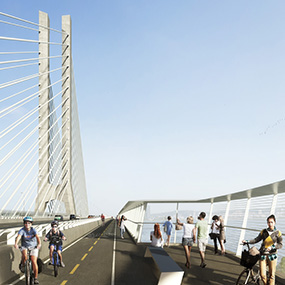 The Signature on the Saint-Laurent Group (SSL) consortium won a C$2.15bn ($1.75bn) contract from the Canadian Government to design, build, finance and maintain the New Champlain Bridge Corridor project across the St Lawrence River.

The partners of the public-private partnership (PPP) will be responsible for the planning, financing, constructing and operating the project.

The new split-view camera displays a 180° view of the area in front of or behind a vehicle helping drivers see traffic and obstacles that enter the vehicle’s path from the side.

Siemens announced plans to install a catenary system for hybrid trucks to electrify a 2km stretch of the E16 highway north of Stockholm, Sweden, as part of a demonstration project.

This is the first demonstration project in Europe in partnership with truck manufacturer Scania and will be conducted on the E16, which connects the regions of Dalarna and Gävleborg, industrial regions.

The contract was awarded by the Swedish Transport Administration to the County Council of Gävleborg.

Samsung introduced its Safety Truck, which allows the driver following the truck to clearly ‘see-through’ the vehicle for any oncoming traffic, as part of efforts to make highways safer.

The trucks are equipped with cameras in the front side and four screens at the rear to help drivers gauge when it is safe to overtake.

The company is currently seeking regulatory approval for the safety trucks, which could save lives and limit accidents caused by overtaking and sudden braking.

Researchers from Canada’s University of Toronto (U of T) revealed that augmented-reality head-up displays (AR-HUDs), which are meant to make driving safer, are a threat to safety.

A study showed that drivers will be more distracted by these AR-HUDs, which provide digital images on windshields to alert drivers from possible collisions or smartphone activity.

U of T psychology professor Ian Spence has investigated what happens when two sources of information are present in the same visual field.

Work under the project will include widening an 11km section of the motorway from four to six lanes between Nudgee and Bracken Ridge, an upgrade of the Nudgee Road interchange, as well as widening the Deagon Deviation to two lanes in each direction.

With a share of 37.5%, Vinci leads the consortium that includes Parsons Enterprises with 25%, Connor Clark & Lunn GVest fund with 25% and Gracorp Capital with 12.5% stake.

The Saskatchewan ministry of highways and infrastructure said the Regina Bypass is the first transport infrastructure project to be completed by a public-private partnership (P3) in the province.

The European Commission (EC) launched an infringement case against Germany’s new road charging scheme for cars, which is also occasionally referred to as the ‘toll for foreigners’.

On 8 June, the country passed a law that will ensure all vehicles registered in Germany from not paying the road charge as their vehicle tax bill will be reduced by the exact amount of the charge.

According to the EC, the new road charging scheme for cars burdens EU-foreigners more than German users.