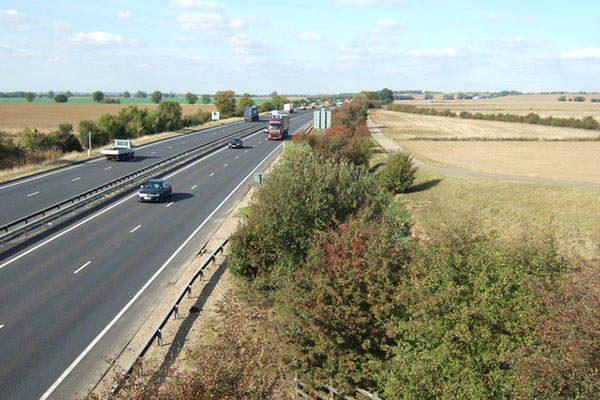 The A14 Cambridge to Huntingdon improvement scheme was proposed by the UK's Highways Agency along a 33km stretch. Credit: Richard Humphrey. 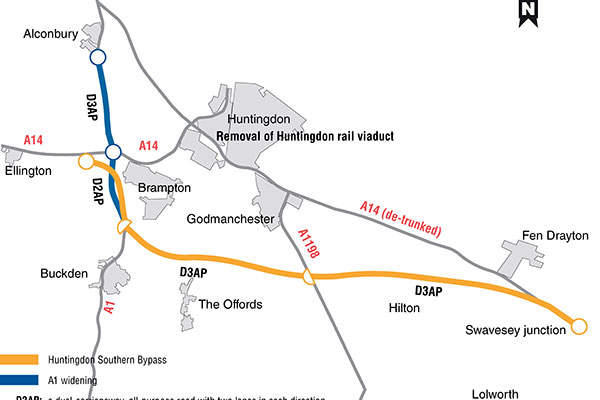 The proposed scheme (Option 7) for the A14 road improvement scheme between Cambridge and Huntingdon. Credit: Highways Agency, UK. 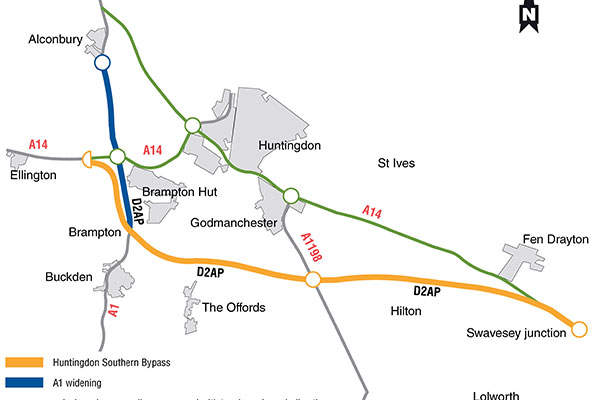 The UK’s Highways Agency has proposed a new A14 Cambridge to Huntingdon improvement scheme to ease traffic congestion on the 33km (21 miles) stretch. The A14 trunk road between Cambridge and Huntingdon is one of the busiest parts of the strategic road network between the Midlands and East Anglia.

Valued at approximately £1.5bn ($2.31bn), the project is the biggest road improvement project in England. A public consultation conducted by the Highways Agency in 2014 found that 85% of the respondents agreed to the A14 improvement, with more than 50% agreeing with the proposed plan.

Construction of the main works began in November 2016 and will continue for three and a half years. Additional works to downgrade the A14 trunk road to the south-west of Huntingdon will take 12 to 18 months. The improved stretch is anticipated to open to traffic by 2020.

The A14 trunk road between Cambridge and Huntingdon frequently faces traffic congestion and delays, which is predicted to worsen in the future. Approximately 85,000 vehicles use this stretch every day, which is much more than its actual capacity. Heavy goods vehicles comprise a quarter of these vehicles, a number that is well above the national average for this type of road.

Following the cancellation of the Ellington to Fen Ditton Scheme in 2010, the UK Department for Transport commissioned a detailed study of options for the A14 development between Ellington and the Cambridge Northern Bypass in late 2011.

The government announced the A14 Cambridge to Huntingdon improvement scheme as a tolled option in July 2012 and gave it a fast-track delivery status in June 2013. However, a public consultation held between September and October 2013 on the scheme options concluded that the A14 will not be tolled.

The Highways Agency began reviewing the scheme and held a formal pre-application consultation between April and June 2014. A development consent order (DCO) application was submitted in late 2014, which was accepted for review in January 2015. The decision of the State Secretary was announced in May 2016.

The newly proposed Huntingdon Southern Bypass will provide a two-lane dual carriageway between Ellington and the A1 at Brampton. The 12.5-mile (20.11km) bypass will also provide a three-lane dual carriageway between Brampton and Swavesey. It will include a bridge over the East Coast Mainline railway and a raised viaduct across the River Great Ouse.

Approximately 12 miles (19.3km) of the A14 trunk road between Ellington and Swavesey, as well as between Alconbury and Spittals interchange, will be downgraded.

The 188km motorway around London is one of the longest and busiest orbital roads in the world. Improvements at the Huntingdon Town Centre will include demolition of the A14 rail viaduct and the construction of a new link road from Brampton Road to connect with the A14 to the west.
The existing A14 road will undergo a 5.5-mile (8.85km) widening to provide three new lanes between Swavesey and Bar Hill and four lanes between Bar Hill and Girton. A 1.5-mile (2.4km) section of the Cambridge Northern Bypass between Histon and Milton will be widened.
The A14 junctions at Swavesey, Bar Hill and Girton will undergo improvements such as an increase in the road capacity, compatibility with adjacent proposed improvements and connections for non-vehicle users.

The design contract for the upgrade programme was awarded to Atkins and CH2M.

A joint venture (JV) of Skanska, Costain, Balfour Beatty and Carillion was awarded an £876m ($1.08m) contract for the improvement scheme. Skanska’s scope of work under the contract includes widening part of the existing A14, part of the A14 Cambridge northern bypass and a section of the major north-to-south A1 road.

Mace secured a contract to provide project management services for the project.

HW Martin (Traffic Management) is responsible for providing traffic management for the project.

MOLA Headland Infrastructure was awarded a contract to carry out site investigations of the project in July 2016.

Financing for the A14 Cambridge to Huntingdon improvement scheme

The UK Government has granted a provision of £1.5bn ($2.31bn) for the project. The funding would come from the central government, local authority and local enterprise partnership.