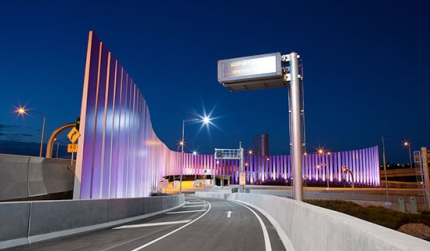 Aiportlink M7 is an underground toll road tunnel in Brisbane and Australia’s biggest roadway project. The tunnel links the city to Brisbane Airport and is a part of the M7 motorway. The $4.8bn project, which generated about 12,000 jobs, took four years to complete and was opened to traffic on 24 July 2012.

Vehicular traffic on the Airportlink M7 tunnel is expected to reach 135,000 vehicles per day. Until August 2012, the tunnel was operated toll free, with automatic toll payment currently being executed. License plates and tags are used to process the toll fee. The maximum speed limit is 80kmph.

“The maximum speed limit is 80kmph.”

The Airportlink M7 tunnel reduces 88% of peak travel time between Brisbane’s Central Business District and Brisbane Airport, as well as uplift the economy in Brisbane, reduce congestion and pollution, and ensure safer travel for its users.

The Airportlink M7 was built in conjunction with two other projects, Northern Busway (Windsor to Kedron) and Airport Roundabout Upgrade. The North Busway project involves building an exclusive bus-only lane between Windsor and Kedron, while the Airport Roundabout Upgrade project involves the construction of a four-lane flyover bridge connecting with Brisbane Airport.

The toll system on the tunnel is fully computerised so that vehicles don’t have to stop to pay the toll charge, which considerably saves petrol, time and longevity of vehicles.

Construction of the Airportlink M7 tunnel was launched in November 2008. The project involved 28 million hours of construction. Two of the country’s biggest boring machines with a diameter of 12.48m and length of 195m were used for tunnelling. A total concrete volume of 807,000m3 and 125,000t of reinforced steel was used for the project.

Bruce Highway is a major north-south corridor in Queensland. Connecting Brisbane with Cairns, it passes through the major cities, including Maryborough, Rockhampton, Mackay and Townsville.

Associated works included the construction of 25 bridges, 15km of tunnelling work and a new highway stretch of about 7km. 17 road headers were used for the project, which was the first time in Australia.

Other works included design of a new parkland of area about 3.5ha and laying of a new pathway of 13km. Lutwyche and Kedron Brook bus stations were erected.

Out of the total 6.7km length of Airportlink M7, 5.1km is the tunnel stretch. The project consists of northbound and southbound tunnels, which are separated by a distance of 20m. Access points to the tunnel are located at Bowen Hills, Kedron and Toombul.

Contractors and key players involved with the new tunnel on M7