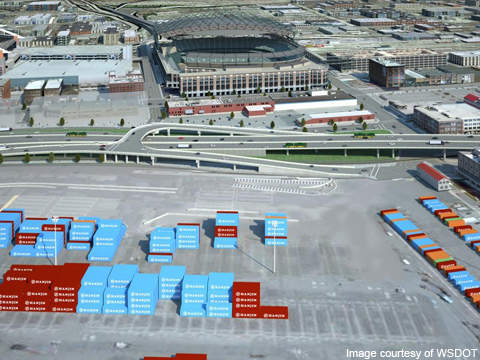 The proposed route of the bored tunnel. 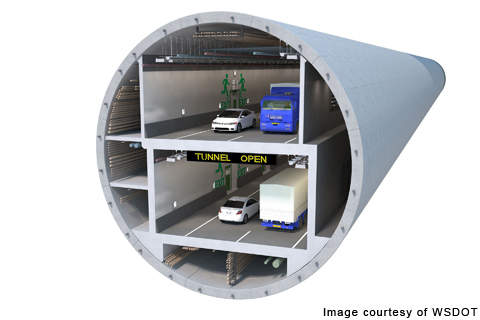 The Alaskan Way Viaduct in Seattle, Washington, US, is a bridge located by the Elliott Bay waterfront on Washington State Route (SR) 99. The bridge was inaugurated in 1953 but badly damaged during the Nisqually earthquake in February 1991.

The Washington Department of Transportation (WSDOT) has decided to replace the viaduct and seawall with a side-by-side roadway and bored tunnel respectively.

The total cost of the project is estimated to be $3.1bn. Construction work began in July 2010 and is expected to be completed by 2016.

The viaduct is located between S Holgate and S King streets, while the seawall is situated between S King Street and Battery Street. The Alaskan Way Viaduct and seawall replacement project is the first road contract granted to Skanska USA Building and Skanska USA Civil, the business units of Skanska.

Based in the US, Skanska is a specialised construction company involved in the development of civil infrastructure. It was awarded a $115m (Skr840m) bridge replacement contract by WSDOT in May 2010.

"Total project cost for the Alaskan Way Viaduct and seawall replacement project is estimated at $3.1bn."

Decades of daily wear-and-tear, as well as several sizeable earthquakes, have taken their toll on the seawall structure. The adjacent Elliott Bay seawall is also deteriorating due to age and the corrosive marine environment, especially as its original design did not allow for earthquakes.

The Alaskan Way Viaduct and seawall replacement project will include the replacement of both the northern and southern portions and is being undertaken by the WSDOT, in partnership with Federal Highway Administration (FHWA), the City of Seattle, King County and the Port of Seattle.

The bored tunnel alternative was advocated in January 2009 by the governor, King County executive, Seattle mayor and the Port of Seattle CEO. This design was considered preferable, since it would reduce delays caused by collisions, stalled vehicles and other similar disruptions in the tunnel.

The environmental assessment for the project was released in June 2008 and the finding of no significant impact was signed by FHWA in February 2009. The request for proposal (RFP) was released by the WSDOT in May 2010 to build the proposed bored tunnel.

The request for proposal (RFP) was released by the WSDOT in May 2010 to build the proposed bored tunnel.

The total cost of the bored tunnel, including its systems, operations buildings and north and south portals, is estimated to be $1.96bn, $415m of which will be earmarked for risk and inflation.

"The Alaskan Way tunnel will be completed by 2016."

The project has been designed to have at least two lanes of traffic open 24/7 on SR 99 throughout the construction period. The new side-by-side roadway was designed to meet current earthquake standards and enhance mobility for riders and goods in the south downtown area. Safety and environmental protection have been given significant importance in the design.

The proposed bored tunnel alternative will re-link the street grid at the ends of the tunnel to remove the Alaskan Way Viaduct along the waterfront. With an approximate exterior diameter of 55ft and length of 1.7 miles (8,976ft) the tunnel will be located 60ft to 200ft below ground. Two southbound lanes on the upper level and two northbound lanes on the lower level will be built inside the tunnel.

Skanska began construction on the project in July 2010. Workers installed signal timing equipment and electronic overhead message signs on State Route 99 between Ward Street and N 145th Street. The viaduct can be continuously monitored and examined as the construction continues.

An advanced system, which can automatically close the structure of the viaduct during severe earthquakes, was installed in 2010. The development of city streets and bicycle or pedestrian paths began in 2010 to ease traffic flow during the construction period.
The southern portion of the viaduct was replaced in 2012 with a new 1.3km (0.8 mile) side-by-side roadway with three wide lanes in each direction.

An 80ft-deep launch pit was dug for Bertha at the south end for nearly a year. It involved construction of underground walls, removing soil and building the infrastructure needed to support the machine. A similar pit is being constructed at the northern end to make way for Bertha. The northern portion, where the tunnel emerges, involves building a connection between the tunnel and Aurora Avenue North.

New electronic driver information signs were installed on State Route 99 and other major routes leading to downtown Seattle. Incident detection systems installed in the tunnel will allow operators to monitor and react to each incident. If one lane of the tunnel is blocked, the overhead electronic signs will quickly close the lane to drivers and variable speed limit signs will increase traffic flow through the open lanes. The disabled vehicles will be removed from the tunnel by emergency vehicles.

Skanska USA Building and Skanska USA Civil were awarded a $115m (Skr840m) bridge replacement contract by WSDOT in May 2010 to replace the southern end of the viaduct.

Seattle Tunnel Partners, a joint venture of Dragados USA and Tutor Perini, was chosen as the design-build contracting team in December 2010 for the construction of the tunnel.

Condon-Johnson & Associates was selected as the speciality drilling contractor to install the temporary shoring at the Elliott Bay seawall along Seattle’s downtown waterfront.