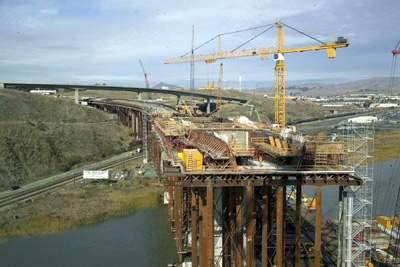 The Benicia-Martinez Bridge in an advanced state of construction. 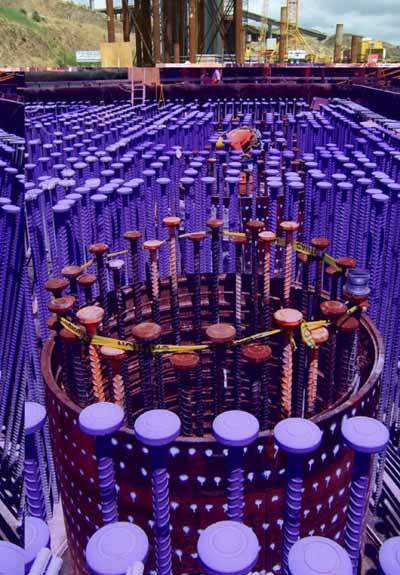 Cap footing for the pier tower of the bridge. 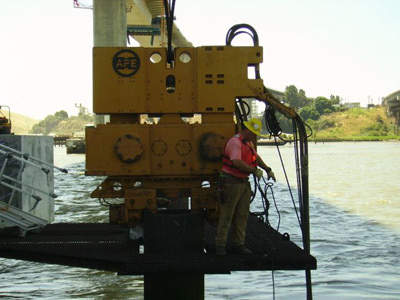 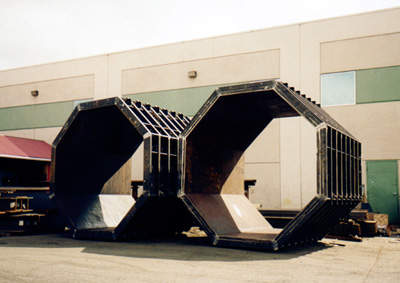 Pier frames for the new bridge. 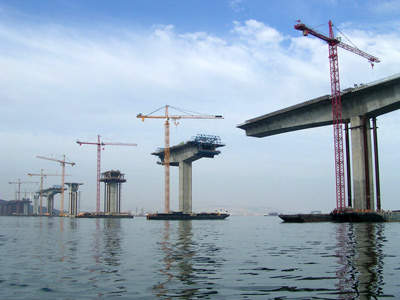 Piers constructed ready for the bridge sections to be placed to complete the construction. 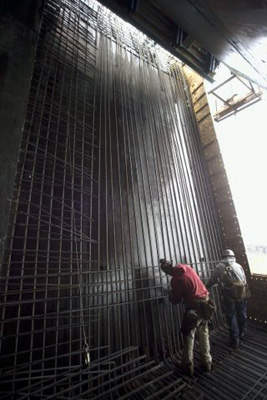 Construction of the reinforcing metal for the concrete castings. 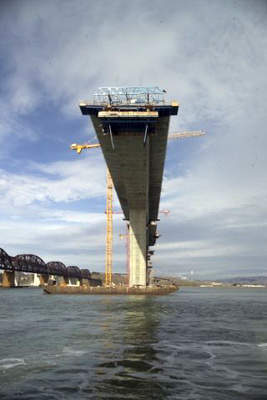 Bridge construction from the water level. 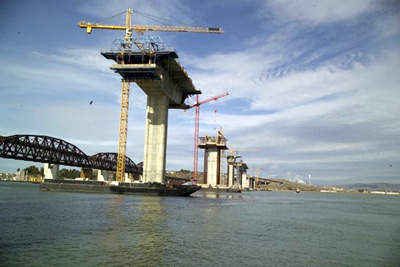 Much of the construction work is being carried out from specially constructed barges.

A new toll plaza consisting of nine toll booths was also constructed as a part of the bridge construction and a new pedestrian/bicycle path was opened on Benicia-Martinez Bridge in August 2009.

The bridge was first on the drawing board in 1997; it cost an estimated $1.2bn and was completed by August 2007. The initial estimated construction cost of the bridge was $300m. The bridge project was conceived to solve several problems:

The new bridge has five lanes (northbound traffic – four mixed-flow lanes and one slow-vehicle lane) east of the existing bridge and a rail span with provisions to accommodate future light rail.

The project also includes the construction of a new 17-booth toll plaza including two carpool bypass lanes and accommodation for electronic toll collection as well as an administration building at the southern approach to the new bridge in Contra Costa County.

In addition, the Interstate 680 interchanges at I-780 in Benicia and Marina Vista / Waterfront Road in Martinez was reconstructed to accommodate the new bridge and toll plaza. As part of the project, the standing bridge was modified and seismic retrofitting was performed to accommodate four mixed-flow lanes of southbound traffic and a two-way bicycle / pedestrian lane.

“The new bridge will be able to accommodate future light rail.”

The project also included the restoration of a 22.8ac area of tidal marsh habitat in the City of Benicia.

The new Benicia-Martinez Bridge, across the Carquinez Strait, is to be a 17-span sand-lightweight pre-stressed concrete box girder structure constructed mostly by a balanced segmental cast-in-place construction technique.

Spans up to 200m are constructed using 4.8m-long segments with a maximum of 19 segments cantilevered from each side of a pier.

The main span foundation is composed of large pre-stressed concrete footings, supported on an eight or nine pile group of 2.5m diameter Cast In Drilled Hole (CIDH) concrete piles with permanent casings and 2.2m-diameter rock sockets. One of the challenges was the construction of these large diameter piles, which are about 60m long. Multiple column configurations include a twinleaf pier and multiple octagonal-shaped four-column piers with connecting pier walls.

The bridge is among the longest span bridges of its type in the USA. The bridge was designed by the joint venture of TY Lin International and CH2M Hill. The main span segmental construction commenced with the first segment placed in December 2004.

“The Benecia-Martinez Bridge consists of 61,200yd³ of concrete.”

Earth Mechanics Inc was chosen to be the lead geotechnical engineer in this project.

Conco provided pumping technology for the pouring of concrete in piling and the majority of other bridge sections. The construction engineer for the bridge was Parsons. The post-tensioning supplier was Schwager Davis Inc. The form traveller supplier was VSL. Ready-mix concrete was provided by RMC Pacific (Cemex).

A Menck MHU-500 hammer was used to drive the casings up to 15m into bedrock. Although pile-driving monitoring did not detect any over-stressing at refusal, some of the steel casings were found to be damaged. The damaged portions of the casings were removed and rock socket lengths were revised accordingly.

Major caving occurred at pier eight during the drilling of the rock sockets. Consolidation grouting was applied in an attempt to improve rock stability and to reduce caving potential. However, subsequent continuous coring around the caved shaft could not confirm the effectiveness of grouting.

The rotator drilling method was used to construct the rock sockets. A pile load test (Osterberg method) was performed to confirm the geotechnical pile capacities of the rotator-drilled shafts.

The Benicia Bridge Project was one of Kiewit’s biggest challenges with large amounts of pipe pile to template piling. In the final stages of construction Kiewit withdrew the template piles (170ft long), which were embedded 100ft into the bay’s mud soil.

“The bridge will alleviate existing and projected traffic congestion and to reduce accident rates.”

The merit sands proved more than a match for the APE 300 vibro, which only managed to shake the portion of pile that wasn’t embedded into the merit sands.

Even the new powerful APE model 200-6 proved to be unworthy by itself to do the job as it just ripped the tops off of the piles without removing them.

Phase two was comprised of an APE D62-22 to smack the pile and jar it free of the merit sands and then pull using the APE 200-6 vibro.

By January 2006 Conco had filled every one of a total of 99 CIDH piles in the water to accommodate 12 of the 64ft-wide, 68ft-long, 15ft-deep pier footings. Several of Conco’s boom pump fleet were transported by barge to complete tremie pours through up to 300ft of line into the depths of the straight.

Kiewit Pacific Co supplied ready mix to all of the marine-based pours from their own batch plant on the south side of the project in Martinez. Construction of the 12 bridge footings was divided into two stages.

Stage one occurred on dry land at the Mare Island pre-cast facility ten miles north of the bridge. Conco’s Schwing boom pumps had the necessary output and reach to place over 600yd³ of material into each of the 1,700t footings. Upon completion, each footing was floated up river into place and supported on eight to nine piles.

RMC Pacific, now Cemex, one of the largest ready-mix suppliers in the world, delivered to the pre-cast yard, as well as portions of land-based pours on the north and south ends of the project.

“The project will also include the restoration of a 22.8ac area of tidal marsh habitat in the City of Benicia.”

Conco’s 58m boom pump was equipped with Schwing’s Generation III 2525-H6 pump kit, with maximum output to 213yd³ per hour at 22 strokes per minute and 1,169psi on the concrete.

To erect the piers themselves, crews utilised a slip form system, pouring approximately 400yd³ at a time, reconfiguring the forms and repeating the process three times.

The Benecia-Martinez Bridge’s 17 total marine and land-based piers consist of 61,200yd³ of concrete.