4 plus shoulder in each direction 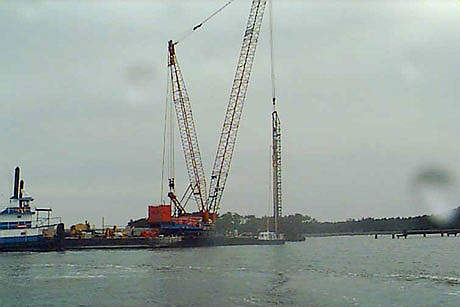 25 test piles were driven, one for approx. every 11 bents. 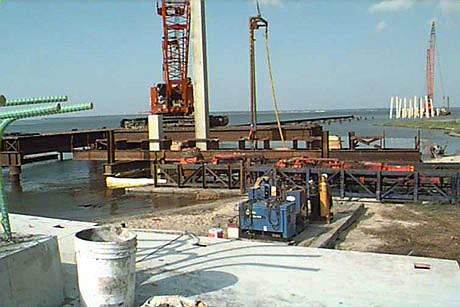 The structure is pile supported using low-water footings only in the high-rise portion.

The longest bridge in North Carolina, the Croatan Sound Bridge, is located from the intersection of NC 345 and US 64-264, just south of Manteo, to the intersection of US 64-264 and Shipyard Road in Manns Harbour on Roanoke Island. During the bridge’s construction a section of US 64 also had to be rebuilt so that the road could accommodate the increase in the flow of traffic as a result of the larger bridge. The project, which was completed in 2002, required an investment of around $100 million. This included $10.9 million for the 2.75-mile road construction and $89 million for the new bridge, which is 5.2 miles long.

In 1996 the State of North Carolina (NC), USA and the Department of Transportation (DOT) decided that a new bridge was required to replace the present William B. Umstead Bridge connecting Dare County mainland with the hurricane-prone East Coast. A new bridge was deemed necessary because of findings made in a 1996 study of traffic flow through Manteo, NC, to Manns Harbour, NC, which is expected to more than double by 2020. The present bridge, opened in 1957, was unable to handle that amount of traffic.

The new bridge (at 5.3 miles) is nearly twice as long as the existing bridge (2.8 miles) and is 20ft higher at its peak (65ft). It has four lanes plus a shoulder in each direction. The new bridge’s location is a key feature of the project as it will relieve congestion in downtown Manteo and will be of great benefit during hurricane evacuations (the region is prone to violent hurricanes).

Plans for the commissioning of the project were made in 1996 and contracts for the design of the new bridge were commissioned by 1997. The project’s construction began after contracts had been awarded to constructors in 1998.

This new bridge uses a fairly new technique in building bridges for the main channel. A three-span, post tensioned, continuous unit spans the main navigational channel. This unit is comprised of two 1,981mm post-tensioned concrete girders (haunch segments), two 1,981mm post-tensioned concrete girders (end segments) and one drop-in segment that spans the main channel. The structure is pile supported using low-water footings only in the high-rise portion. 25 test piles were driven, one for approximately every 11 bents.

The marshy land on either side of US 64, usually too unstable to use as a road foundation, was drained rather than excavated by using a device known as a vertical wick drain (VWD). VWDs went into the earth 25ft below the surface and were spaced every 3ft to remove water from the saturated soil. This compressed the soil much faster, working like a vacuum of capillary-like filters.