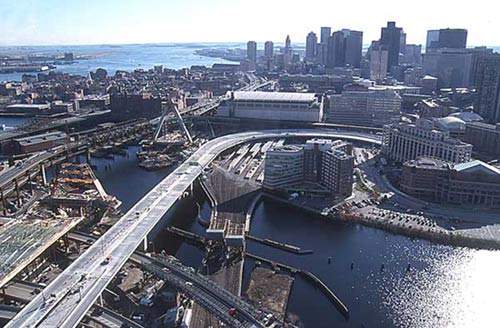 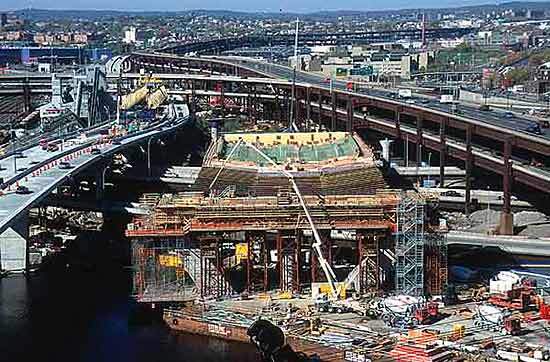 North tower of the I-93 cable stayed bridge under construction on the shore of the Charles River. 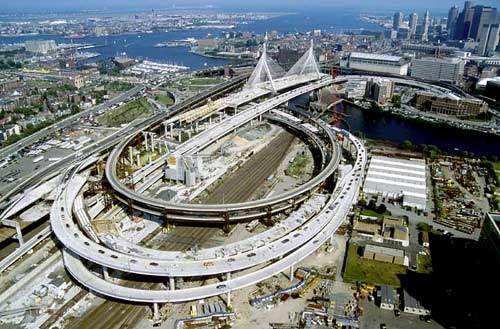 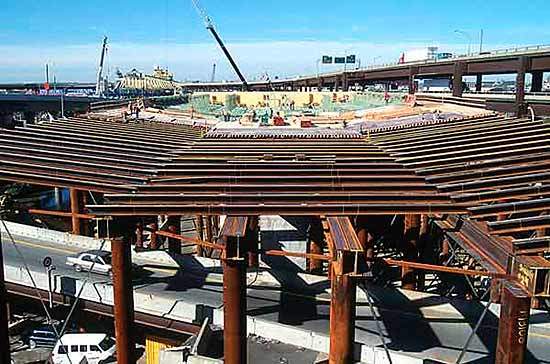 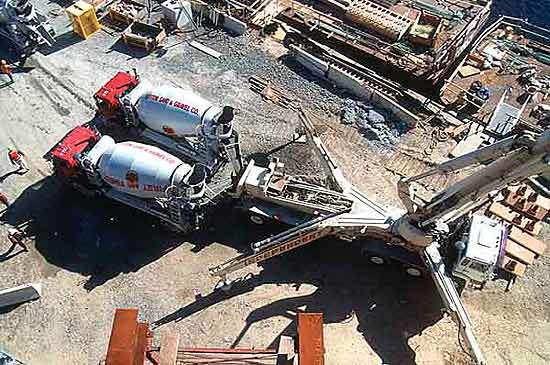 Construction of the north back span of the cable stayed bridge. 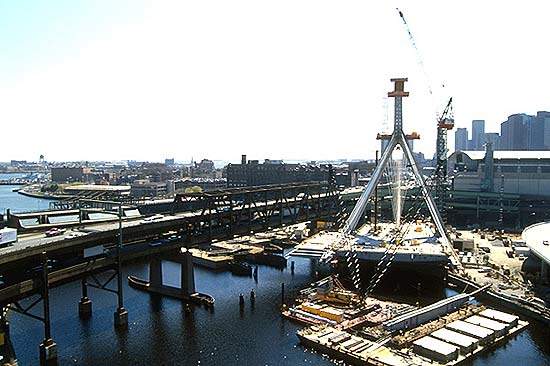 The Charles River bridge is an essential part of the ‘Big Dig’ currently underway in Boston, Massachusetts. The Big Dig is regarded as the largest, most complex and technologically challenging highway project in American history. The Massachusetts Turnpike Authority are the sponsors of the project. The Leonard P. Zakim Bunker Hill Bridge is being opened in three stages. Four lanes each of I-93 Northbound and I-93 Southbound were opened in March 2003 and December 2003 respectively, with the remaining two lanes opened in 2005.

The new bridge is a replacement for the deteriorating six-lane double-deck bridge now crossing the Charles River. The project also includes a parallel four-lane bridge, the Storrow Drive Connector Bridge, to carry traffic to and from Storrow Drive and Leverett Circle, which opened to traffic one week ahead of schedule in October 1999. The overall project has approximately doubled the crossing capacity to 14 lanes (ten lanes on the Leonard P. Zakim Bunker Hill Bridge, and four lanes on the Storrow Drive Connector Bridge).

Designed by HNTB, the new Charles River Bridge in Boston is a complex structure. The 185ft width of this bridge makes it the widest of its kind in the world. The service load and dynamic forces are complicated by the asymmetric and unusual cable stay geometry. This bridge is the widest cable-stayed bridge in the world at ten lanes. It has a total of 116 cable stays. Each stay contains between 14 and 72 strands of steel. Each of the strands contain seven wires. With twin spires that echo the Bunker Hill Monument, this bridge is already a landmark for Boston.

The bridge has a total length of 1,457ft. The main span is 745ft long and 183ft wide. The back spans on the land side of the towers, which measure 295ft on the downtown side and 420ft on the Charlestown side, are supported by a single plane of cables. The one-plane cable design used on the south back span is designed to allow traffic flow to continue on the existing I-93 connection to Leverett Circle during the construction period. The disruption caused by the Big Dig building works has been a major public complaint during the project.

The cable-stayed bridge is priced at $100 million. It was designed by HNTB and the main contractor is Kiewit.

This 830ft-long, four-lane companion to the ten-lane cable-stayed bridge connects the Leverett Circle area on the north-western edge of downtown Boston with points north of the Charles River. Nine box girder sections, in cross section the largest in North America, were barged into place and raised into place by cranes or (in the main span) jacks.

The main span is 380ft long. The back span is 225ft long. The bridge is 76ft wide. The bridge has a single steel girder box 18ft deep at the piers and 9ft deep at centre span. The substructure has two water piers and two land bents. It is supported on drilled shafts. The cost of the Storrow Drive Connector Bridge was $22.27 million.

In addition to the bridges, the project also includes some landscaping work on new park and recreational space by the river. For this reason the deck of the bridge has been designed with diamond shaped cut outs to let light penetrate to the park below. The park will cover an area of 40 acres.