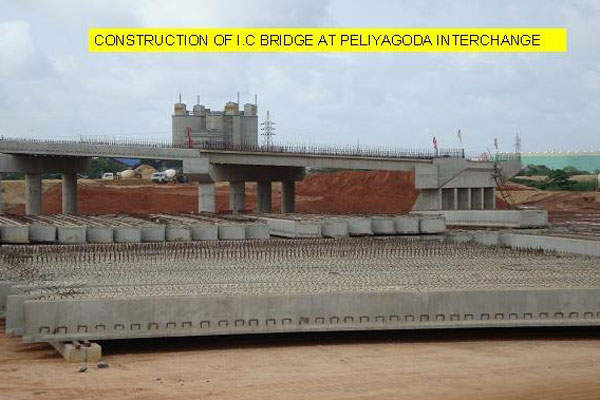 The four-lane structure of the expressway runs from Peliyagoda to Katunayake. Image courtesy of Ministry of Ports & Highways.

Colombo-Katunayake Expressway (CKE) is a high-speed road link between the city of Colombo and Katunayake in Srilanka.

It is 25.8km long connecting the New Kelani Bridge to the International Airport of Katunayake.

The expressway construction was started in August 2009 and opened to traffic in October 2013. It includes 42 bridges and 100 culverts along the route.

The new expressway facilitates easier services for the increasing traffic and thus helps to reduce traffic congestion. It has also cut travel times between Colombo and Katunayake by 20 minutes.

Sri Lanka is one of the fastest growing nations in the world, but poor transportation facilities have become a major problem to the growth of the country, thus affecting economic development.

Some of the projects include the Outer Circular Highway (OCH), Southern Expressway (SCH) and Katunayake – Padeniya – Anuradhapura (KPA) highway.

The Southern highway was opened to the public in November 2011 and is 126km long.

The CKE project was initially proposed in 1967 but postponed due to political and economical reasons.

The project attained attention during the Mahindana Chintana programme of improving road transport facilities and was expedited since 2008.

The expressway is divided into two sections. Section one consists of six lanes and is 33.5m wide.

It runs from New Kelani Bridge to Peliyagoda. The other section has four lanes connecting Peliyagoda to Katunayake, and is 26m wide.

The Outer Circular Highway (OCH) is another major road expansion project of Sri Lanka. The CKE is also connected to the Colombo-Kandy highway and the Kottawa-Galle highway.

The expressway is designed to allow a speed limit of 80kmph to 100kmph.

The China Metallurgical Group Corporation (MCC) executed the project as per an agreement signed with the Government of Sri Lanka in August 2008.

Engineering Consultant (ENGCL) was appointed as the project consultant for the CKE project.