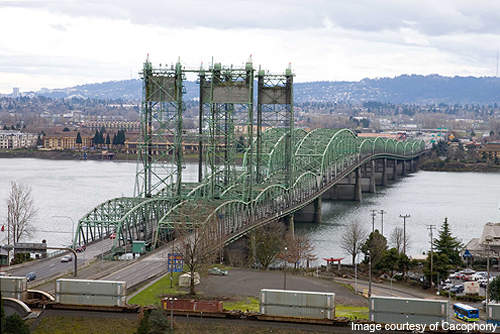 Columbia River Crossing was a planned replacement for the existing 90-year-old I-5 bridge. 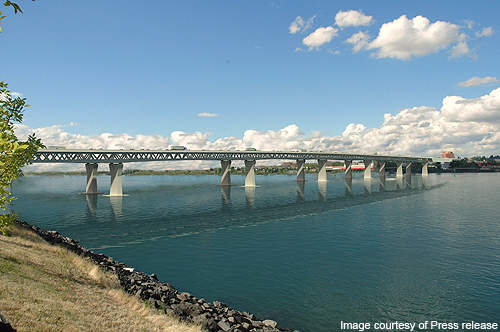 The CRC would have a deck truss bridge, 95ft above the river, sponsored by the Oregon Department of Transport and Washington State Department. 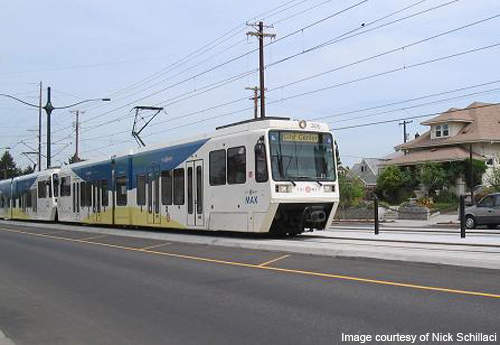 CRC project was planned to include extension of Portland's light rail Yellow Line to Vancouver, Washington.

Columbia River Crossing (CRC) was the replacement of the 90-year-old Interstate-5 bridge which spans from SR500 in Vancouver, Washington to Victory Boulevard in Portland, Oregon. Construction on the 8km (five-mile) bridge was expected to begin in 2013 and take five years to complete, but cancelled in May 2014 due to lack of funds.

The decision to build a new bridge was prompted by increasing traffic congestion on the existing bridge, collisions and vulnerability of the existing bridge to earthquakes. The new CRC would have reduced congestion, cut collisions by 70% a year and reduced emissions, in addition to being resistant to earthquakes. The bridge would not require lifts to allow the passage of ships below it.

The river crossing project was planned to include replacement of the I-5 bridge; extension of light rail line towards the north from Portland to Vancouver; rebuilding of five interchanges; widening pedestrian and bicycle paths and setting up an electronic tolling system.

The CRC was planned to be a ten-lane two-bridge structure, one heading north and the other south. Each would have three through lanes and two lanes leading to the interchange. The light rail line would run under the southbound bridge deck, while the pedestrian and cyclist facilities would be developed under the northbound bridge deck.

The light rail Yellow Line was planned to extend from Expo Center MAX Station in Portland to Clark College in Vancouver. The 20ft pedestrian and cyclist path would be 16ft wider than the existing 4ft one.

Improvements planned on the interchanges were to include links to arterials and state highways, and inclusion of add/drop lanes.

Design and construction of the Columbia River Crossing

CRC was planned to be a deck truss bridge. This type was chosen from the three options put forth by a panel, the other two options being cable-stayed and tied arch.

Deck truss was considered to be affordable, expected to meet the schedule and minimise environmental impact.

"CRC was planned to be a ten-lane two-bridge structure, one heading north and the other south"

The design was finalised by the end of 2011. The project achieved both air and maritime clearances to be 95ft from the river.

The final environmental impact statement was completed in 2011 and property acquisition was commenced in 2012. Construction is scheduled to begin in 2013 and the bridge is expected to be opened to traffic in 2018.

The cost of construction was estimated to be $3.2bn-$3.6bn. The project was to be jointly financed by the Federal Government, states of Oregon and Washington and through the toll collected. A part of the funds would have been supplied by the US Department of Transportation from its corridors of the future programme.