Tower height above the water 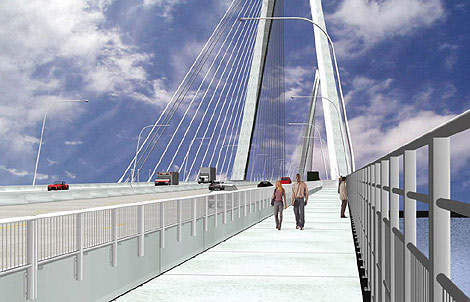 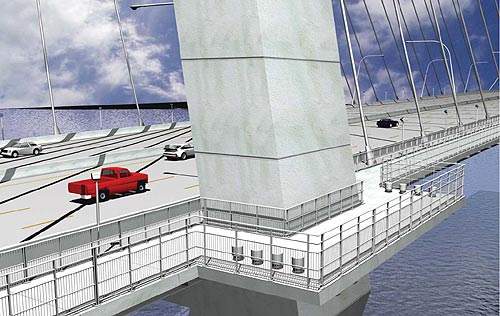 The main span towers are founded on 10ft diameter drilled shafts surrounded by rock islands. The towers will stand 570ft above the water. 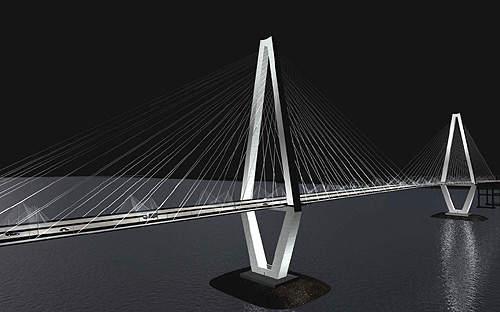 Light planes, located at the apex, reinforce the tower's diamond shape. These lights highlight the bridge's axis as well accentuating the cables at night. 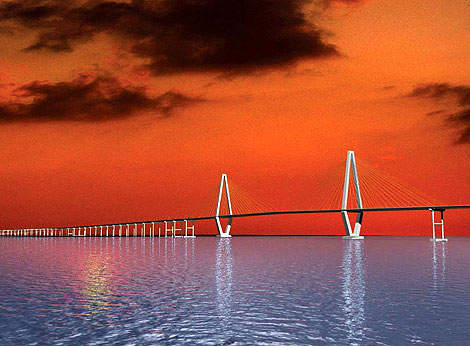 The creation of a landmark architectural design in the area is the driving idea behind the Cooper River Bridge project. The single tower scheme is intended to reflect the nearby elegance of the city of Charleston. 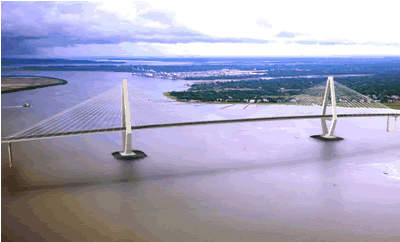 The bridge opened to traffic in July 2005, nearly a year early. 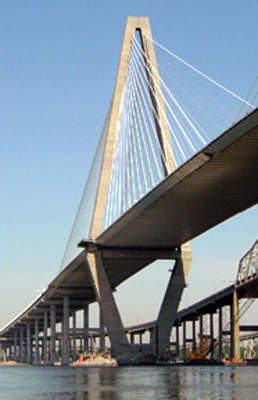 The diamond shaped supports are distinctive. 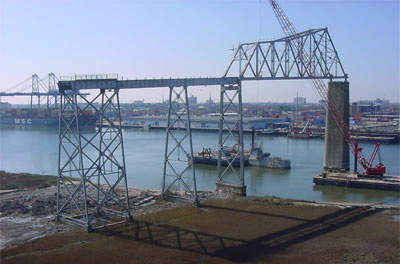 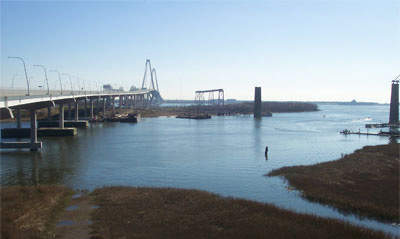 The road deck leading to the bridge. 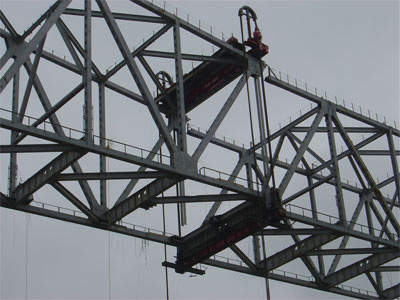 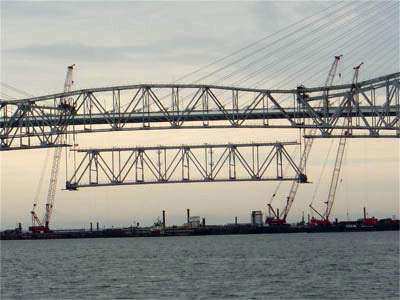 Section of the bridge being lifted into position.

The construction of the Cooper River Bridge was a design/build project to replace two old bridges in Charleston and Mount Pleasant, South Carolina. The new bridge, which opened in July 2005 (just under a year earlier than planned), connects two major municipal areas and offers eight lanes for traffic plus a pedestrian/bike lane. The bridge measures 2.5 miles in length and has increased vertical and horizontal navigational clearance over its predecessors to reduce hindrance to river traffic (road deck is 200ft above the average high tide mark).

It was built for the South Carolina Department of Transportation and the main contractor was Palmetto Bridge Constructors (a joint venture of Flatiron’s Civil Division and Tidewater/SKANSKA). The new bridge was designed to enhance mobility, accessibility and safety for motorists and pedestrians and meets all current design standards for traffic safety, reducing major bridge maintenance.

The regional necessity for a new bridge encompassing optimum design arose due to the ever-increasing traffic demands in the area of Charleston and Mount Pleasant, South Carolina. The new Cooper River Bridge project was designed to facilitate these
demands, ensuring continued economic development in the region and state. The two old bridges (Grace [two 10ft lanes] and Pearman [three 12ft lanes]) were obsolete in design, with narrow lanes quite unsuitable for the modern heavy traffic load.

The Cooper River Bridge (bridge crossing US 17) was intended to offer a link in the regional roadway network, namely providing access to major employment centres in North Charleston, commercial and industrial port facilities, as well as Federal defence
facilities, the nationally recognised historic district on the peninsula, and the residential and recreational areas east of Cooper River.

The Port of Charleston, the second largest container cargo port on the East Coast, has significant economical impact through the large number of jobs, income and tax revenue it produces. This project has enhanced national and international shipping
accessibility to the Port.

The Cooper River Bridge incorporates 2.8 miles of structures, including two interchanges, a pedestrian and bicycle pathway, as well as eight traffic lanes and the cable-stay span over the shipping channel. The main span towers are founded on 10ft diameter drilled shafts surrounded by rock islands. The towers stand 575ft above the water and the bridge rises 186ft above the water and has the longest cable-stayed main span in North America, at 2.5 miles.

The creation of a landmark architectural design in the area is the driving idea behind the Cooper River Bridge project. The single tower scheme was intended to reflect the nearby elegance of the city of Charleston. The proportions of the tower were
produced through tapering the towers from the base to the top consistently, sculptured to appear as refined monuments that appear to be cut from a single block of stone.

The smaller scale details include hand railings, lampposts and paving patterns to both enhance the aesthetic appearance of the bridge as well as meeting safety requirements. All these features were designed to minimise obstruction of the view from
the bridge for motorists and pedestrians.

The Cooper River Bridge cost approximately $632m. It was funded partly through an approved direct Federal TIFIA loan of up to $215m. The loan repayment source is a subordinate pledge of SCTIB revenues. These primarily consist of
existing truck registration fees and loan repayments to the SCTIB.

The South Carolina Transportation Infrastructure Bank (SCTIB) sponsored the new Cooper River Bridge to the amount of US$325m and the South Carolina Department of Transportation supplied construction oversight, ownership and maintenance of the project. Parsons Brinckerhoff of New York was the bridge designer, along with contributions from Macdonald Architects of San Franscisco.

TYLI/HDR, a joint venture of TY Lin International, and HDR provided design review, engineering and inspection services for SCDOT. Skanska, the leader of Palmetto Bridge Constructors consortium, was contracted to design and construct the new Cooper River Bridge. It was valued at $531m; Skanska’s share is 60%. It procured some of the required right-of-way and is also relocated the existing utilities. Extensive use was made of local contractors and suppliers in the Charleston area.

PBC received the notice to proceed in July 2001, with a contract completion date of July 2006. But PBC had a plan to build it in four years, not five, decreasing the cost of overheads. The project was split into five jobs – each interchange, each high-level approach and the main span. There were five budgets, five schedules, five sets of equipment and five sets of supervision. Demolition of homes began in the fourth quarter of 2001 and the first foundation work started in April 2002.

Design called for a drilled-shaft foundation, chosen over pile driving to decrease noise for nearby residents and create fewer disturbances to the existing bridges. The site had soft soil, forcing crews to drill 240ft to a deeper clay layer. Some of the shafts were 12ft in diameter. Steel girders on the high-level approaches sit atop a series of columns and pier caps. Concrete girders were used on the interchanges.

The 1,546ft main span hangs between the diamond-shaped support piers by 128 cables, which are made of seven-wire strands twisted together and enclosed in a high-density polyethylene pipe. The pipe ranges in diameter from 12 to 20 inch. The bridge structure contains 300,000yd3 of concrete, 50,000 tons of reinforcing steel, 40,000 tons of structural steel and required 400 drilled shafts for the foundations. Each cable supports in excess of 1 million pounds.