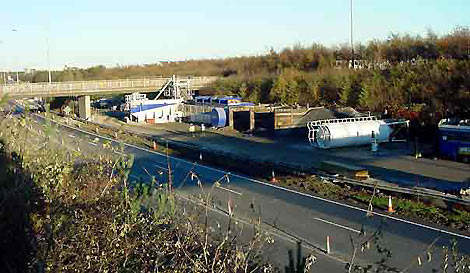 The Dublin Port Tunnel will provide a eight-minute link between the port and the M50 for some 20,000 vehicles per day.

The Dublin Port Tunnel is a 6.5km long dual carriageway, 4.5km of which is fully underground. 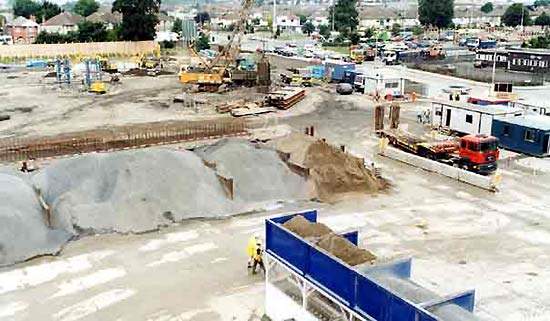 The vertical shaft at Whitehall is the largest European shaft built to date and has resulted in the excavation of over 84,000m³ of earth. 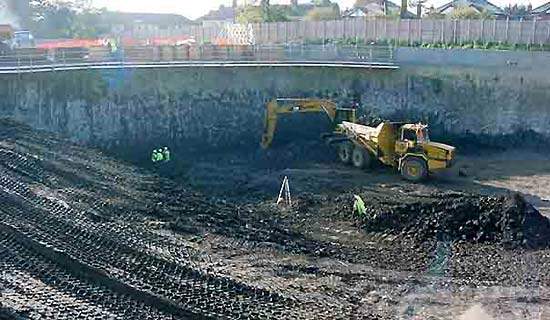 The shaft was constructed using the diaphragm walling method. 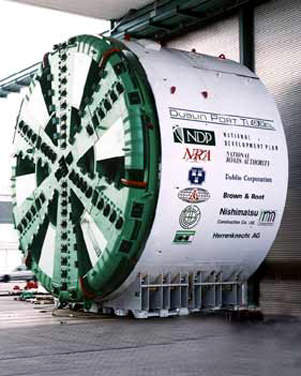 The 11.8m-diameter Herrenknecht TBM (nicknamed Gráinne) was delivered to the shaft in 103 parts. 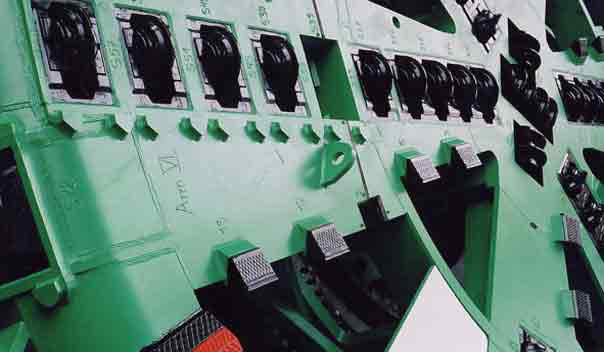 Detail of the Herrenknecht TBM.

The Dublin Port Tunnel is open to all types of traffic, although some trucks may not fit under its 4.65m height. 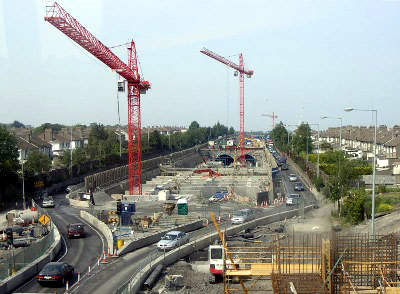 Construction of the tunnel began in 2001 and boring ran from in two directions from Whitehall and back. 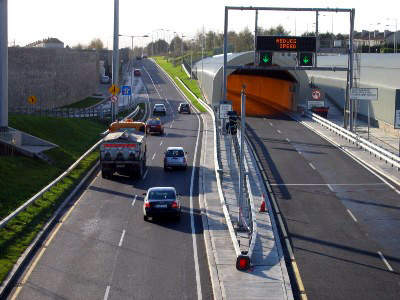 Transroute International is the operator of the Dublin Port Tunnel for a five-year period.

Dublin Sea Port, which currently handles two-thirds of all Ireland’s seaport trade by value, sees over two million trucks and 300,000 cars travel in and out of the port each year. These figures have been growing steadily during recent years and the
city’s roads have not been able to keep up with what has been 150% growth since 1993. The solution to this is the Dublin Port Tunnel which comprises approximately 5.6km of dual carriageway including 1.9km of twin cut and cover tunnels, 2.6km of twin bored
tunnels and 1.1km of surface road along with associated interchanges and infrastructure.

The tunnel project was designed to relieve surface road congestion in Dublin city centre by diverting heavy goods vehicles (HGVs) from Dublin Port directly onto the motorway network. The tunnel will provide an eight-minute link between the port and the M50 for some 20,000 vehicles per day.

The tunnel cost €752m and was officially opened on 20 December 2006 by Taoiseach Bertie Ahern, TD. However, it was initially only open to HGVs, because of a delay in safety checking. It was opened to all traffic on 28 January 2007. Cars and private vehicles have to pay a toll of between €3 and €12 depending on the time of day they use the tunnel. Heavy goods vehicles and large buses may use it free of charge.

“The tunnel will provide an eight-minute link between the port and the M50 for some 20,000 vehicles per day.”

In 2005, the National Roads Authority (NRA) selected Transroute International, which is part of Groupe Egis based in France, to operate the tunnel for a period of five years with a renewal optional of two years. The service contract provides for operation, maintenance, safety, traffic management and toll collection. A new subsidiary, Transroute Tunnel Operations Ireland Ltd, was set-up for the purpose. Tunnel operations, including tolling, employ between 50 and 60 people. The service contract is worth €15m to Transroute over the five-year period.

The toll plaza is operated from the southern tunnel control building by Transroute who collect tolls from cars and light commercial vehicles, paid in cash or electronically. HGVs are exempt and are allowed to use a toll-free lane. A toll of €12 (peak) and €6 (off-peak) is charged for cars and light commercial vehicles. The peak period is defined as 6am to 10am southbound and 4pm to 7pm northbound, except Saturdays, Sundays and public holidays. There is a reduced toll between 10pm and 6am of €3 which applies to all non-exempt vehicles travelling north or south. Tolls collected are paid to the Department of Transport.

ROUTE OF THE TUNNEL

The Dublin Port Tunnel runs from M1/M50 Coolock Lane Interchange and was constructed as a bored tunnel in two directions from Collins Avenue, Whitehall. A shaft with a diameter of 56.6m was sunk some 33m into the ground from which two Tunnel Boring
Machines (TBMs) are setting off to drill the two-lane, 11m-wide traffic tunnels. When TBM 1 (travelling south through hard rock) reached Fairview Park it turned around and drilled the northbound route.

The same procedure occurred for TBM 2 (travelling
north through boulder clay) which turned around at a reception area at Swords Road. Cut and cover tunnel construction was used from Swords Road to the M1 entrance and from Fairview Park to the Alfie Byrne Road, a short overground drive from the
port itself. The two TBMs have passed under 351 houses, there is a guarantee from the construction company to remedy any damage to houses due to the tunnelling but there have only been superficial decorative damage claims made.

The tunnel was built in five distinct sections: two ‘cut and cover’ sections, two bored sections, one through open-clay and one through hard limestone and a specialised pipe-jacked section under the Dublin-Belfast railway line. Construction commenced in 2001 and was due to be completed by 2005 but due to some unforeseen problems the completion was delayed.

“It has been argued that the tunnel should have been 5.5m high.”

One of the problems was leakage, which was noticed in April 2006 and was due to substandard concrete; this, as well as the protective liner, was quickly replaced. In addition some of the tunnel boring took longer than expected and a railway crossing was more complicated than anticipated (the railway crossing was the scene of subsidence).

The tunnel has also been criticised for not being high enough. With an operating height of 4.65m not all trucks can use it. It has been argued that the tunnel should have been 5.5m high. Overheight vehicles are detected up to 3km from the tunnel portals and automatic signage is then deployed to stop the vehicle. If required, barriers can be lowered to protect the portals.

The vertical shaft at Whitehall was the largest European shaft built to date and has resulted in the excavation of over 84,000m³ of earth. The launching point for the two TBMs that drilled the majority of the Dublin Port Tunnel, the shaft is 33m deep, 56.6m
in diameter and has walls 1.6m thick. Over 16,000m³ and 1,332t of reinforcing steel were used in the construction of the walls and the base slab of the shaft.

Lead contractor Mowlem-Nishimatsu-Irishenco (MNI) awarded the contract for the shaft and boring machine reception areas to Mowlem Piling Intrafor (MPI), a joint venture between Mowlem Piling and Foundations and French ground specialist Intrafor. The
shaft was constructed using the diaphragm walling method (something of a French speciality) whereby sections of the ground are dug out and bentonite slurry is poured in to prop up the sides of the excavation before finally adding the concrete. The ground
was dug out in 1.2m x 2.8m sections by a large grab operated from a crane. The grab cable was regularly surveyed to ensure the hole remained vertical. The bentonite slurry was injected from a reservoir on site, pumped back up and recycled until the sand
content in the bentonite dropped to 2%.

As the shaft was sunk, 32t cages of reinforcement bars were dropped into place around the hole by a Sennebogen 4400 140t crane. Concreting was then completed with two tremie pipes using very high 175mm slump concrete supplied by Readymix. The concrete
had to be poured into the 7.2m wide steel panels at a rate of 70m³/h to avoid cold joints that could cause leakage problems later on.

The 11.8m-diameter Herrenknecht TBM (nicknamed Gráinne) that tunnelled from Whitehall to Fairview was delivered to the shaft in 103 parts and assembled at the launch pit in May 2002. The 156m-long, 1,600t machine was a hard rock tunnelling machine
that, by the time it had completed its round-trip of 4.5km at 10m per day, had excavated more than 500,000m³ of rock.

45 support staff per shift were required to operate the machine, most of whom were involved in the associated tasks of preparing 8t concrete tunnel liner segments that the TBM fixed, bolted and grouted into place as it went along.

The second TBM (nicknamed Meghan) only had to tunnel through boulder clay and travelled at a rate of 5m per day. The machine was 60m long and weighed 1,100t, its round trip of 0.65km saw the excavation of 71,000m³ of earth. It required 18 staff per shift to function fully.

“Two tunnels, each 11.77m wide, run alongside each other providing northbound and southbound traffic routes that avoid the busy Dublin city centre.”

The Dublin Port Tunnel is a 6.5km long dual carriageway, 4.5km of which is fully underground at an average of approximately 20m beneath the city. Two tunnels, each 11.77m wide, run alongside each other providing northbound and southbound
traffic routes that avoid the busy Dublin city centre.

All boring was completed by November 2003 but it took a further year to complete surface works and perform all the necessary electrical and mechanical installations (as well as road markings, signs, etc.) within the tunnel itself.

The tunnel is equipped with the latest safety features. There are 15 pedestrian crossing points (PCPs), which are situated 250m apart with emergency telephone and fire fighting niches. Additional fire hose reels are also located 125m from each niche. There are four vehicle crossover points at 1km intervals that consist of a lay-by and also an emergency and recovery area. These are located under Shantalla, Collins Avenue (site of the original launch shaft), Marino and Cloisters. GSM telephone and FM radio coverage is carried into the tunnel with break-in facilities over public broadcasts in the event of an emergency.

There are 420 cameras attached to the vehicle management system (VMS). A maximum speed limit of 80km/h is in place and HGVs are prevented from using the outside lane. In addition over 200 Dublin Fire Service personnel have undergone special tunnel training in Switzerland so that procedures in the event of an emergency or fire are in place and well practised.