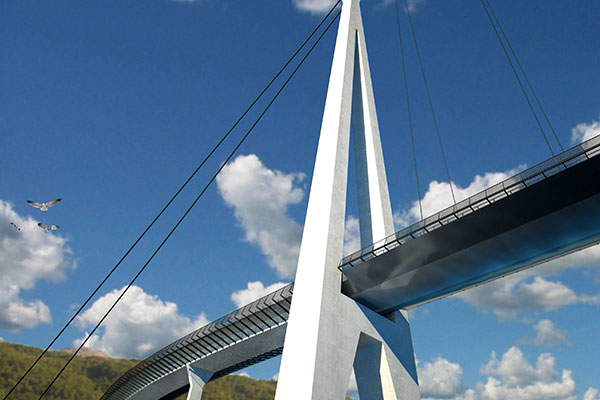 The bridge will be anchored on both sides with the help of conventional rock anchors. Image courtesy of Cowi AS / Statens vegvesen. 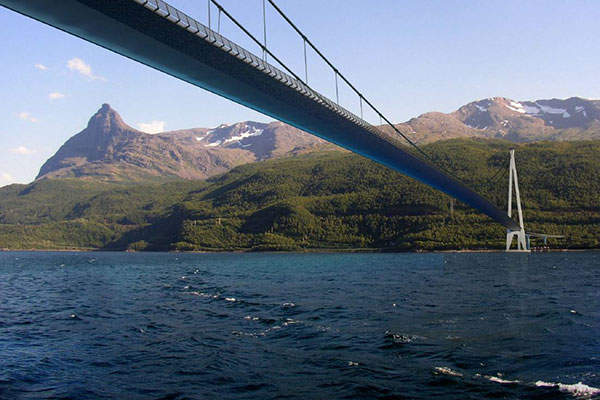 The bridge will be based on bridge symphony technology for suspension bridges. Image courtesy of Cowi AS / Statens vegvesen. 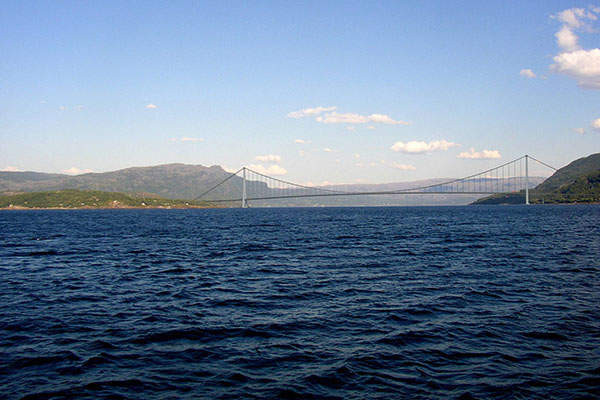 The 1.5km Halogaland Bridge will be the second largest suspension bridge in Norway.

“The bridge reduces the distance between Narvik and Bjerkvik by 18km, via the European E6 highway route.”

The bridge reduces the distance between Narvik and Bjerkvik by 18km, via the European E6 highway route. The route is safer, shorter and less congested.

Norwegian Public Roads Administration (NPRA) conducted a public inspection for the project in November 2007. The project proposal was adopted by Narvik Municipality in February 2012.

The project received approval from the Government in Council of Norway in May 2012. Construction of the project began in December 2013, while the bridge was opened to the public in December 2018.

The project included the construction of two new roads on both sides of the Hålogaland Bridge. The road on the Narvik side is 1.4km long, while the road on the Øyjord side is 3.5km long.

The roads have a land width and shoulder width of 3.5m and 1m respectively. The total width of the road is 10m. It offers a running speed of 80km/h for the vehicles.

The 3,140km long E6 Highway is the primary road of both the Swedish west coast and the north-south region of Norway. The E6 Highway is among the most important highways of the Scandinavian zone, as it connects several key locations. It has been estimated that approximately 12,000 vehicles travel on the Swedish part of the highway, with one-fifth of those being heavy trucks.

Construction of the project was divided into two main categories: concrete works and steel works.

The concrete works included the construction of a 250m viaduct at Kari beach, a 148m viaduct at Øyjordand the 135m-long Øyjord bridge. Construction of a 1.1km throne tunnel between Trældal and Leirvik was also part of the project. The tunnel reduces landslides on the route and was opened in September 2015.

Design details of the Hålogaland Bridge

The 1.5km Hålogaland Bridge is the second largest suspension bridge in Norway. The span of the bridge was built as a closed steel box girder. The main span is 1,145m and the side spans are 240m and 149m. The navigational clearance is 42m, while the height of the pylons is 175m.

The bridge has two main cables with a length of 1,621m-long and a diameter of 47cm. The hanging cables and suspension rods increase  safety for travellers.

The A-shaped bridge also has five pillars with height ranging from 12m to 30m. It has a sailing height of 40m and sailing width of 200m.

The bridge top has an inverted pyramid shape, providing enough space for lighting and protection from bad weather. The main deck consists of a streamlined steel box with two road lanes and a 3.5m-wide foot and cycle path. The bridge is anchored on both sides with the help of conventional rock anchors.

“The project received approval from the Government in Council of Norway in May 2012.”

Ístak, a subsidiary of E Pihl & Son, received a road and tunnel works contract for the project. The $63.79m (Nkr375m) contract is for the construction of 4.9km of roads and excavation of three tunnels. The contract was awarded in January 2013 and is expected to be completed by mid 2016.

Dissing+Weitling architecture is the architect for the project.

Sichuan Road and Bridge Group, a company based in China, was awarded a €93m ($128m) contract for the delivery, production and erection of steel structures to the Hålogaland Bridge in October 2013.