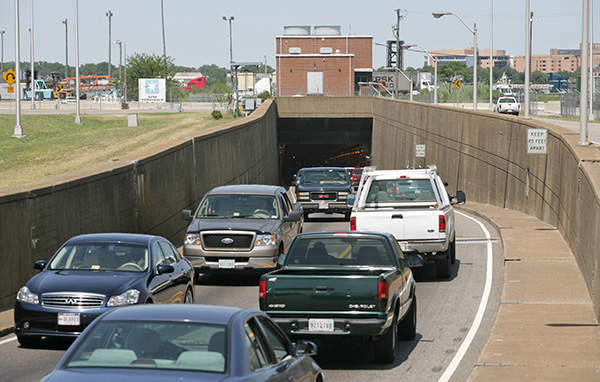 Heavy traffic on the Portsmouth side of existing Midtown tunnel has been causing serious congestion. Credit: Tom Saunders, VDOT. 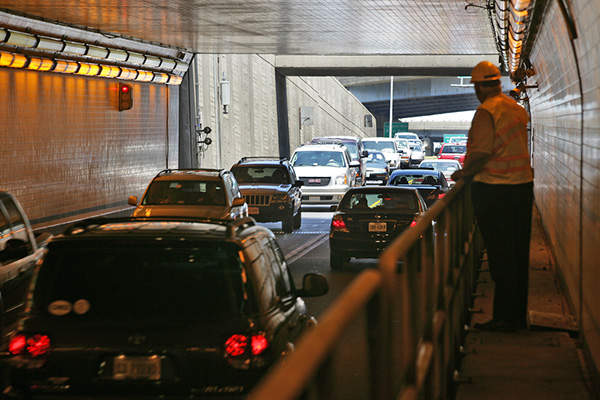 The existing Midtown tunnel on Norfolk side along route U.S. 58 is operating beyond its design capacity. Credit: Tom Saunders, VDOT. 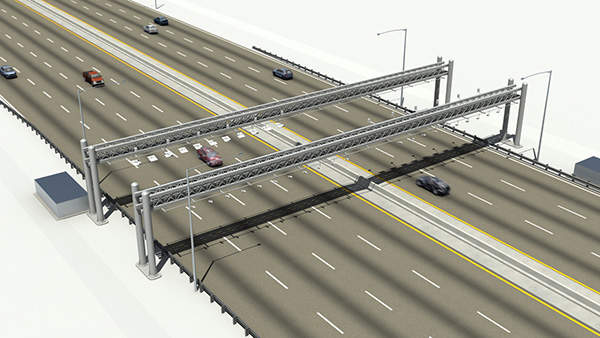 Artist rendering of the toll road gantry that is installed as part of ERTP. 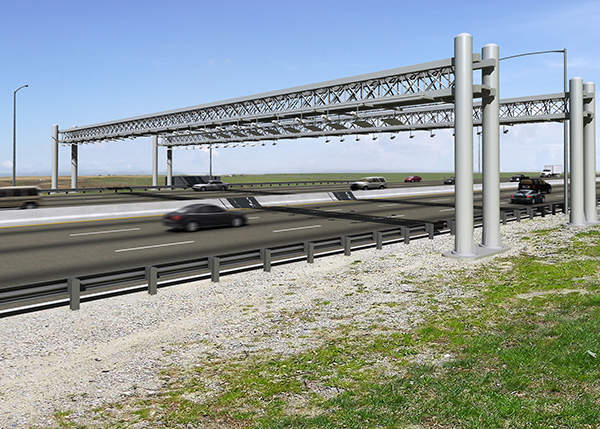 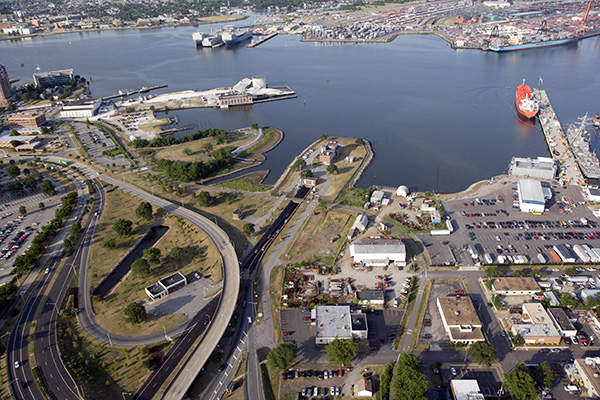 Aerial view of the Midtown tunnel from Norfolk side. Credit: Trevor Wrayton, VDOT. 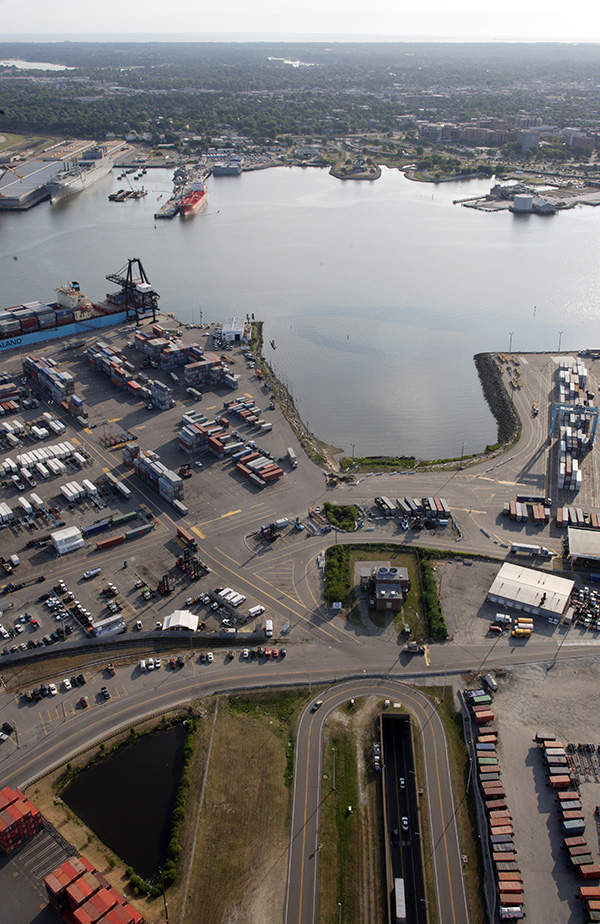 Aerial view of the Midtown tunnel from Portsmouth side.

The Elizabeth River Tunnels Project (ERTP) includes the construction of a new tunnel in place of the Midtown tunnel and the restoration of existing Downtown tunnels in Virginia, US. The tunnels connect Norfolk and Portsmouth in the Hampton roads region.

The ERTP is being developed by Virginia Department of Transportation (VDOT) in partnership with Elizabeth River Crossings OPCO (ERC) at a cost of $2.1bn. The Commonwealth of Virginia is the owner of the project and ERC will be responsible for the operation and maintenance of the Midtown and Downtown tunnels.

Construction of the project started in June 2012 and is expected to be finished by April 2018. The project will enhance the transportation network in the Hampton roads region. It is expected to generate 500 direct jobs, 1,000 indirect jobs and 200 maintenance and operations jobs.

Hampton Roads Authority and local leaders ranked ERTP as the number one transportation priority in the Hampton roads region, as well as the largest road project to be constructed in the past 30 years.

The Hampton roads area has three tunnels, including the twin Downtown tunnels with two lanes and the Midtown Tunnel with single traffic lane. The existing Midtown tunnel is a prominent link between Norfolk and Portsmouth. It is 50 years old and carries approximately a million vehicles each month, which is beyond its design capacity.

The existing Midtown Tunnel’s usage has increased to 600% and the population has risen by 70% since construction. A new tunnel is proposed to reduce congestion, travel times and provide improved and safe connectivity between Norfolk and Portsmouth. The new Midtown Tunnel was constructed adjacent to the existing one and below the Elizabeth River. The immersed tube offers better connectivity between Norfolk and Portsmouth.

The ERTP also includes other key components. Midtown tunnel and the two Downtown tunnels will be repaired and upgraded to the country’s present fire and safety standards. The Martin Luther King (MLK) freeway is being extended from US 58 in London Boulevard to I-264 along with an interchange at High Street. Changes are being made to Brambleton Avenue/Hampton Boulevard interchange in Norfolk.

The new Midtown tunnel was opened in 2016 and MLK expressway extension and repairs to Downtown tunnels are expected to be completed by 2018.

The average travel time on a round trip became 30 minutes shorter after the opening of new Midtown tunnel.

The MLK expressway extension will give the drivers options to choose either the Downtown or Midtown tunnel, offering better accessibility to various parts of the region.

The tolling on ERTP was implemented from 2014. Toll gates are located at the Midtown and Downtown tunnels in Portsmouth and at the entry and exit stations of MLK expressway extension.

Tolls are collected through automatic toll system instead of traditional toll booths. ERC increased the toll fee after the new Midtown tunnel opened in 2016.

Existing portions of the MLK in Portsmouth and local travel within Portsmouth on the MLK extension will be toll-free. The Gilmerton and High Rise bridges are the non-tolled alternative river crossing routes. Public transportation is also toll-free.

The new Midtown tunnel is being built through a public-private partnership between the Virginia Department of Transportation (VDOT) and ERC.

Major construction work for the new underwater tunnel involves element fabrication, dredging, excavation support and pile driving. The immersion of last tunnel element was completed in 2015.
The new tunnel is a reinforced box culvert. The ventilation system in the new tunnel is provided by jet fans.

To reduce the negative impact on the environment, the project followed Environmental Protection Agency (EPA) and commonwealth regulations. It was built using ISO 14001 sustainable standards and an environmental management system was used by Skanska.

The side slopes were placed at a safe distance from the existing tunnel to reduce unnecessary settlements. Silt curtains were employed to avoid siltation in the river during dredging.

ERC signed a comprehensive agreement with VDOT in December 2011 to finance, build, operate and maintain ERC for a 58-year concession period on a performance-based, fixed-price-and-date contract. It will help the drivers and tax payers from exceeding construction costs and delays.

VDOT provides $421.1m to maintain current low-toll rates. Skanska and Macquaire contribute $272m, while $463m are sourced through a FHWA TIFIA loan. A funding of $675m is procured through private bonds and $251m through revenue generated during construction.