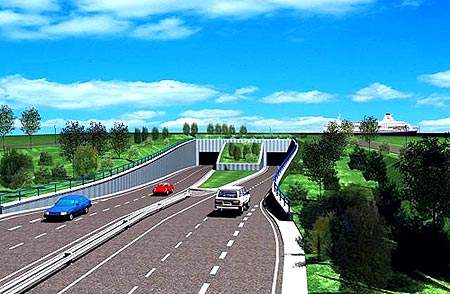 The Herren Tunnel is a road tunnel in Lübeck opened in August 2005. 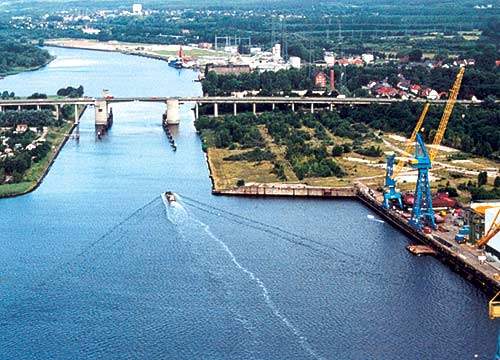 The Herren Tunnel replaces the ageing bridge over the Trave River. 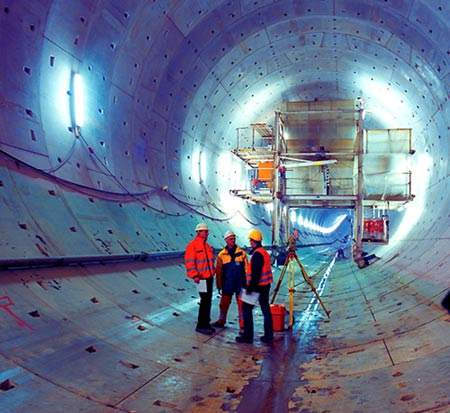 The tunnel was sealed by lining it with 3,640 prefabricated concrete segments, put in place immediately behind the TBM. 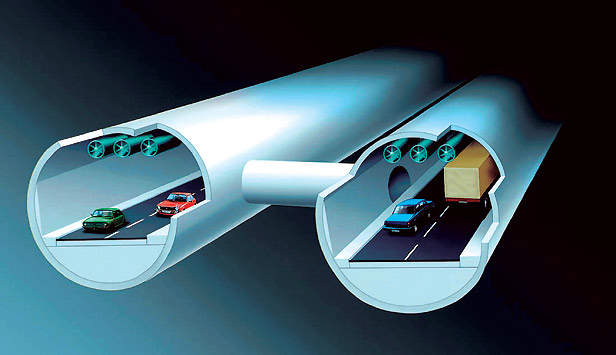 The Herren Tunnel is a twin parallel tube tunnel. 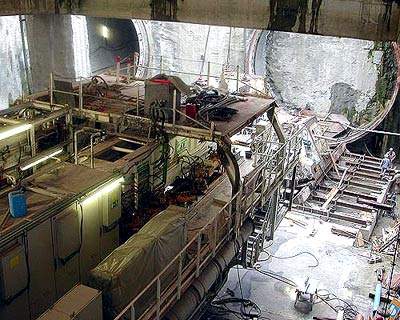 The twin tunnels were mainly cut using a TBM. 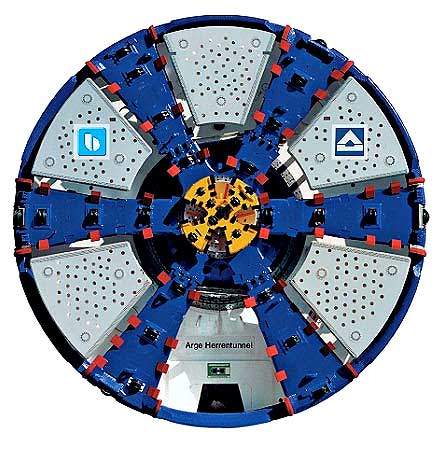 The cutting edge of the TBM. 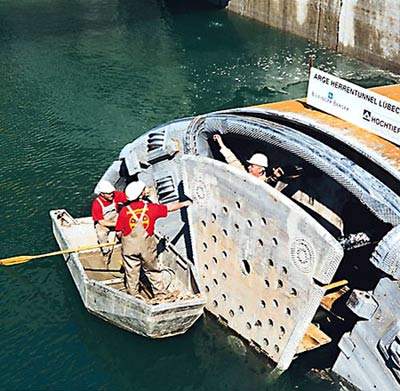 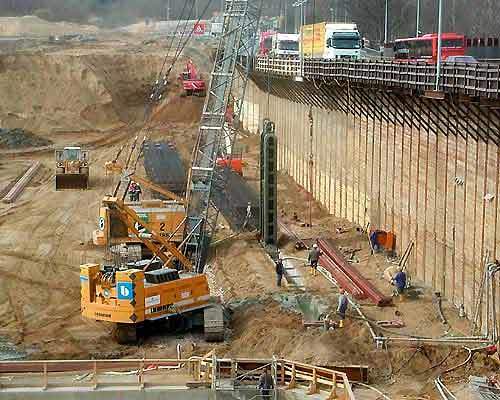 Excavation for one of the ramps to lead to the tunnel entrance. 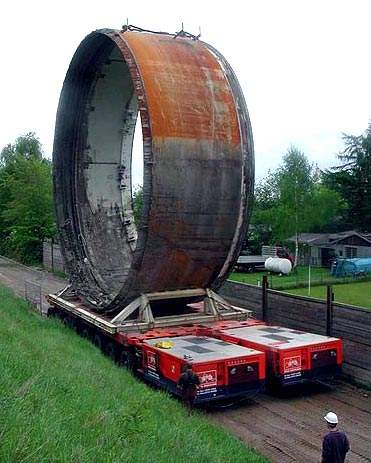 Components of the TBM being transported for assembly.

The interior of the tunnel before the road surface was laid. 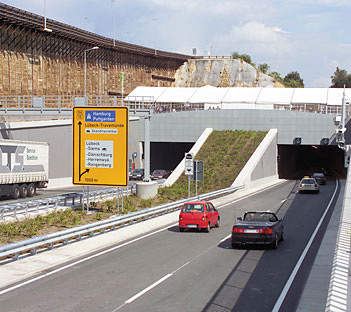 The entrance of the finished Herren Tunnel. 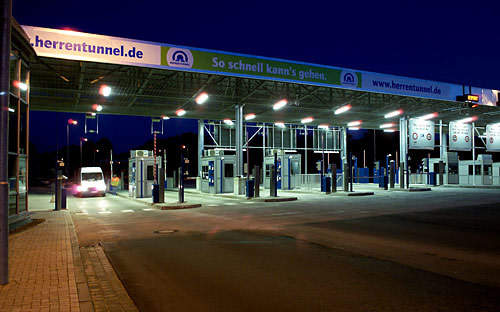 The city of Lübeck in the Hanseatic League region of Northern Germany had a major traffic congestion problem across the Trave River, which divided the old city from the new regions of the city. The traffic used to run across the Trave River via a road bridge, which was desperately in need of replacement (the bridge was also hazardous to shipping traffic on the river).

The Federal government offered sufficient funds to the City of Lübeck for a replacement bridge at the initial planning stages in 1997. However, the city authorities decided that the best option for the city was a road tunnel to take the traffic along the diverted national B104 under the river. This would then result in the existing bridge being demolished and the site undergoing redevelopment.

The Federal government were only prepared to finance a new bridge and this lead to the setting up of a Public Private Partnership (PPP) arrangement to finance the new tunnel. This was one of the first PPP arrangements set up in Germany, and was made possible by the 1994 Private Financing of Highway Construction Act.

“The Herren road tunnel will take the traffic along the diverted national B104 under the river.”

The city granted a 30-year concession to finance, build and operate the tunnel to a private investment company, Herrentunnel Lübeck GmbH % Co. KG (HLKG), which is run in a 50/50 partnership by HOCHTIEF Projektentwicklung GmbH of Essen and Bilfinger Berger BOT GmbH of Wiesbaden.

There were four bidding groups for the tunnel contract in 1997 following a prequalification phase. Each bidder was requested by the city of Lübeck parliament and the municipal construction authority to present three different plans for a road route across the River Trave within five months.

The winning consortium of HOCHTIEF and Bilfinger Berger put forward three ideas: a cut and cover tunnel, a shield driven tunnel and a high bridge.

The shield driven tunnel was considered the best prospect as it would avoid the disruption of shipping, protect the water supply and be environmentally friendly. The tunnel was chosen since a bridge was thought to be too disruptive, and a tunnel would also help reduce traffic noise in the area.

In addition, the area where the old bridge was situated was earmarked for the extension of the Seeland Quay to provide more access for shipping in the river.

The investment for the construction of the tunnel amounted to €179m. €89m came from the Federal government, €54m from loans (HSH Nordbank) and €36m from HLKG.

The total investment costs are due to be recouped by a toll charge levied during the 30-year concession; the control of the tunnel (which has to be kept in an excellent state of repair) will be handed over to the city of Lübeck in 2035.

Work on the tunnel started in October 2001 and was completed in early 2005 with the tunnel opening in August 2005. The Trave River tunnel complex is approximately 1km in length and was constructed by ARGE Herrentunnel Lübeck, which is a joint venture of HOCHTIEF Construction AG and BilfingerBerger AG.

“Investment costs are due to be recouped by a toll charge levied during the 30-year concession.”

The tunnel is a twin parallel tube tunnel 11.5m in outside diameter, 10.5m inside diameter, 1.04km in length and situated 9.5m below the riverbed. The tunnel was cut by a Tunnel-Boring Machine (TBM) for 780m of its length using a shield driving technique (the machine used was a Herrenknecht hydroshield machine that was named HILDE, a German acronym for ‘down into the dark earth of Lübeck’); the remaining 260m was constructed by using cut-and-cover method.

The 11.5m-high cutter head of the hydroshield TBM consists of six spokes which remove the ground with ripper teeth and roller cutters. The average daily advance rate was 7.5m.

The TBM drove the tunnel, which was sealed by lining with 3,640 prefabricated concrete tunnel segments immediately behind the TBM. The TBM had to negotiate two problematic areas in the construction where the tunnel was driven through a protective layer of marl lying close to the drinking water strata (this was negotiated with no problems and sealed).

The construction also incorporated two man-sized emergency crosscuts for escape access between the tunnels. The cut and cover sections of the tunnel were lined by in situ rectangular reinforced concrete sections and serve as the links between the ramp sections and the shield-driven tunnels.

The ramp sections have a length of 80m to 100m and lead from ground level to the tunnel portal. The tunnel is monitored 24 hours a day by a tunnel control unit.

The tunnel was designed to exceed the current safety regulations set out in the RABT regulations. There are emergency telephones and video surveillance every 150m, state-of-the-art fire alarm and fire fighting systems and BOS radio channels for emergency services.

The tunnel design also takes into account loads from harbour areas and also a possible scenario of the weight of a sinking ship directly above the tunnel on the riverbed.

The German automobile club ADAC has carried out an extensive safety audit on the new tunnel complex and it has concluded that it is one of the safest in Europe.

Both the tunnel construction and all the fittings were in line with the rules laid down in ZTV Tunnel, Part 1, point 10. The load-bearing structures were designed to withstand a temperature of 1,200°C for 30 minutes.

For the interior fitting-out of the tunnel, the only materials used are those complying with the relevant standard – DIN 4102 Building Materials Class A (non-flammable). The tunnel structure is designed to withstand 1,200°C, which corresponds to a fuel tanker burning with a fire load of 100MW.

The tunnel will be toll-operated for the duration of the 30-year concession. The toll systems and the amount charged were the remit of two consultancy companies, TÜV Rheinland and Autostrade International.

ADAC carried out an extensive safety audit on the Herren Tunnel and concluded it to be one of the safest tunnels in Europe.”

There are several different toll lanes allowing different methods of payment. These include an automatic toll system where the vehicle passing through the toll has a transponder or onboard unit (OBU) in the vehicle that can communicate with the toll station via antennae at the side of the road; the toll charges are thus recorded automatically. Other methods include cash payment to both coin bins and manned booths and also credit card payment.

Each of the tunnels carries four lanes of traffic and the traffic load is estimated to be fairly light at 45,000 vehicles per day.

The tunnel is part of the national highway Bundestrasse 75 connecting Lubeck and Travemunde. Cyclists are not allowed to use the tunnel but have to detour around Bad Schwartau or use the free shuttle bus provided for them.