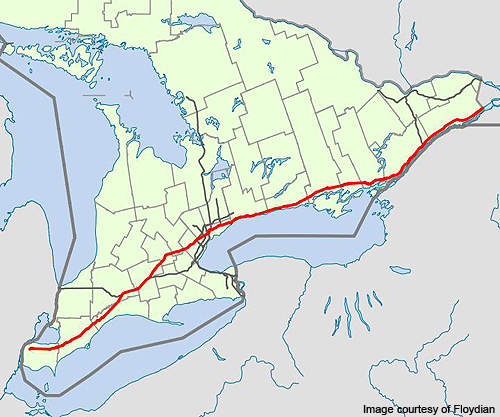 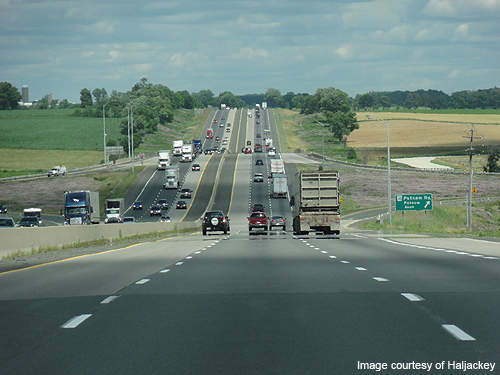 The highway between London and Ingersoll. 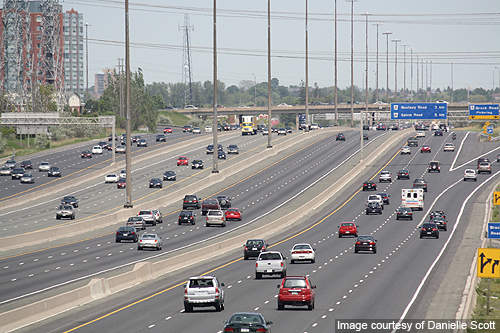 A collector-express roadway configuration of Highway 401. 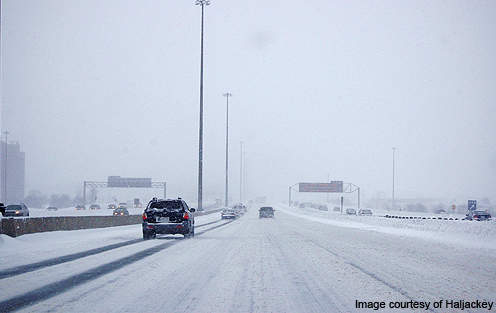 Highway 401 during the winter snow fall.

Highway 401 extends from Windsor to the Quebec border in the Canadian province of Ontario. The 816.6km-long route is managed by the Ministry of Transportation of Ontario. Highway 401 segment near Toronto is one of the widest and busiest urban freeway sections in the world. The section carries over 400,000 vehicles on an weekday.

Highway 401 stretches through south-western, central and eastern Ontario regions. The route allows commuters to travel over a speed of 100km/h throughout its length. A proposed Windsor-Essex Parkway will result in Highway 401 connecting directly to the US border by 2013.

Highway 401 includes a multi-structure bridge at Hogg’s Hollow in Toronto. It is a set of four separate highway bridges, two for each direction, spanning the Don River Valley. The collector and express lanes on the bridge carry eastbound and westbound traffic on the highway.

Highway 401 between Cobourg and Port Hope was widened from four to six lanes in 2007, and a 4.6km section between Highway 403 and Oxford Road 2 was also expanded to six-lanes in the same year.

Construction on a $65m project including a new interchange at Stevenson Road and resurfacing from the eastbound 401 Oshawa to 35/115 began in September 2005. Work is underway on 23.4km section.

The project involves the replacement of ten overhead sign structures and construction of 11 new footings along Highway 401 within GTA.

A new road construction on a 2.8km section of 401 began in August 2009. The $105.7m project also adds new structures for a Core Collector system. Under the contract, the section from Highway 401/403/410 to Hurontario Street will be widened from six to 12 lanes. The project is scheduled for completion in August 2013.

Slope rehabilitation and concrete toe wall construction on a 1.33km section began in August 2010. A $69.8m reconstruction and widening project will add a new drainage system, a granular base, automated traffic message signs and structures on a 5.7km section near Toronto by November 2013.

Hogg’s Hollow Bridge is situated on the key segment of Highway 401. The bridge carries around 400,000 vehicles a day on weekdays. In order to reduce the traffic congestion at this section, the Ministry of Transportation initiated rehabilitation of the bridge.

The Ministry of Transportation contracted Morrison Hershfield as the lead consultant for total project management (TPM) and detailed design assignment for the rehabilitation of Hogg’s Hollow Bridge in 2008. The bridge consists of eight main trussed spans and two approach spans of concrete slabs on steel beams.

“Hogg’s Hollow Bridge is situated on the key segment of Highway 401.”

In November 2008, work began on the rehabilitation of road and bridge structures on Hogg’s Hollow Bridge.

Construction is scheduled to complete in September 2013.

The Toronto (Highway 401) Compass System area was introduced in early 1991. The system was initially set up along a 16km section from Martin Grove Road to Yonge Street, and now extends from the Highway 403/Eglinton interchange to Highway 401/410 interchange and easterly to Harwood Avenue for a distance of about 59km.