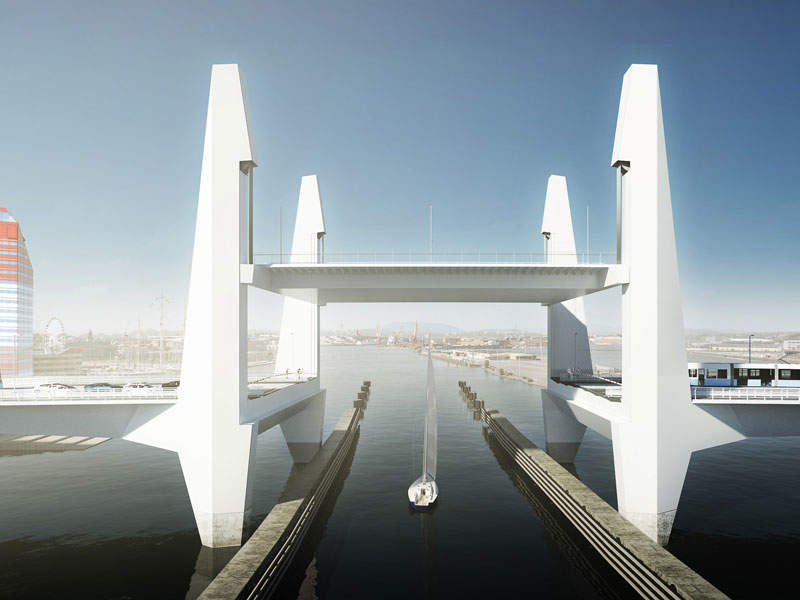 The Hisingsbron Bridge will feature a central lifting span at the centre. Credit: Mattias Henningsson-Jönsson. 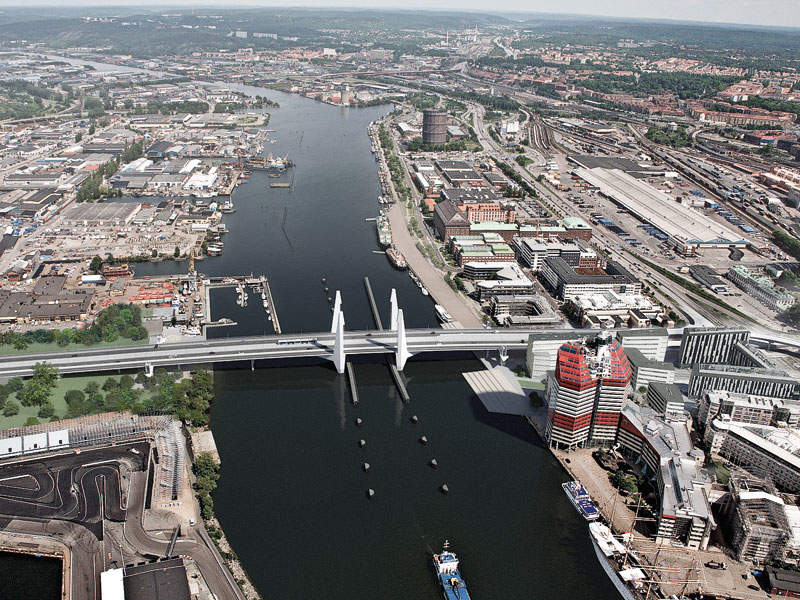 The new bridge will replace the existing bridge over the Gota River and connects the two shores of the river. Credit: Mattias Henningsson-Jönsson. 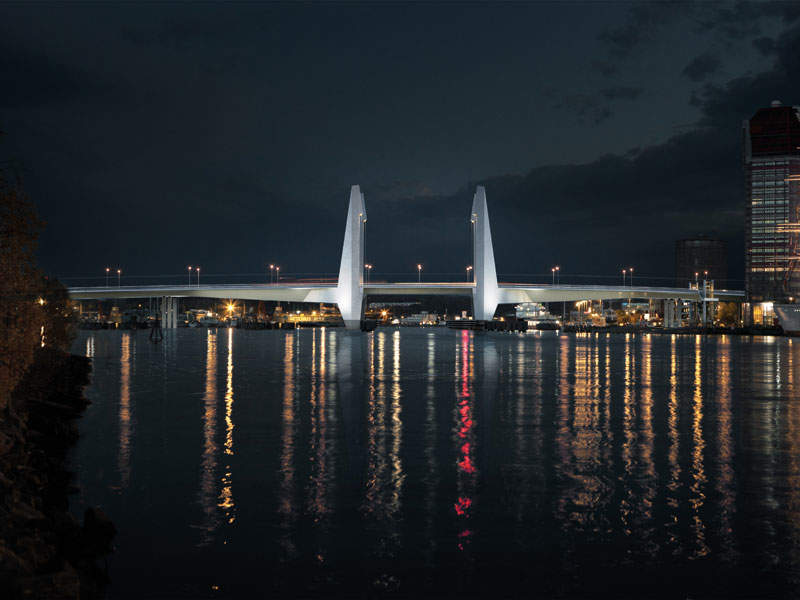 The design of the new bridge is perceived as an Arpeggio. Credit: Mattias Henningsson-Jönsson. 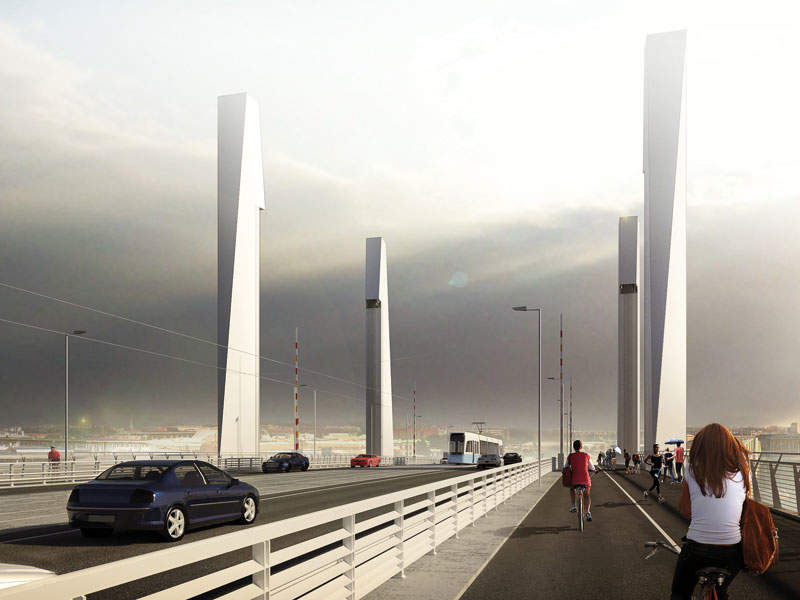 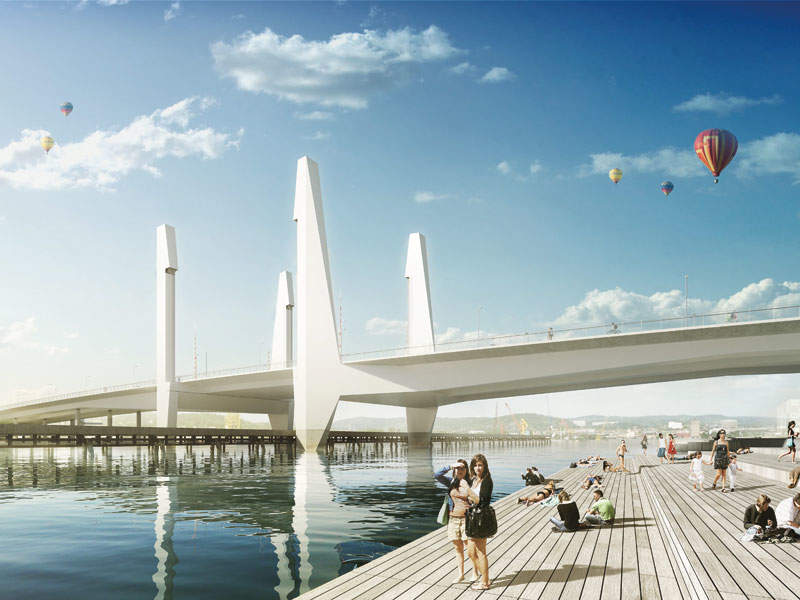 The bridge will also enable shipping in the future. Credit: Mattias Henningsson-Jönsson.

Hisingsbron Bridge is a proposed vertical-lift bridge over the Gota River on the western coast of Sweden. The bridge will connect central Gothenburg with Hisingen city and also the two shores of the river, contributing to the development of both the regions while binding the banks together.

The new bridge will replace the existing Göta älv Bridge, which is in poor condition and needs replacement to avoid high maintenance costs.

Estimated to cost SEK3.7bn ($529.66m) as per 2009 estimates, the construction of the Hisingsbron bridge will begin in the first quarter of 2017, with the completion scheduled for 2022.

The bi-directional bridge is designed for a life span of 120 years and will be wide enough to carry trams, buses, cars, pedestrians and cyclists.

It is anticipated to be opened for cars and buses by 2020 while tram traffic will be allowed from 2021 and the existing bridge will be demolished a year later.

The bridge will be approximately 350m-long and will feature a central lift span, pylons with counterweights and support pillars.
It will feature an Arpeggio-like superstructure with a central lifting span, supported by four steel towers/pylons, raised 30m above the water level.

The pylons in their broken form will be strongly connected to the long side ranges where the beams become narrow towards their end, forming a coherent shape, which will be clearly visible even from a distance.

The central lifting span or deck will be 37m-wide and comprise a 2m-high and 28m-wide steel box-like structure. Its adjacent side bucket will be a composite construction consisting of three steel boxes with a thin concrete deck.

The bridge will feature multiple quays with stairs and elevators to provide access for pedestrians and cyclists.

Lighting on the new bridge in Gothenburg

The planned lighting for the bridge will make it aesthetically appealing and a landmark symbol for Gothenburg. It will be lit with a visually appealing lighting design that makes it visible from many places in Gothenburg.

The lighting is being planned in accordance with Swedish Transport Administration’s road lighting recommendations. It will mainly have two major components, which include integrated bright light for handrails on the side of the pedestrian, and bike path creating a smooth and even light surface. Spill light will be used for the rear positions of the cable system to create a virtual sparkling effect. The main shaft will be illuminated with soft gradient light beginning at the piers and ending outwards.

LED fixtures, which have a longer life and higher efficiency, will be used for the entire bridge lighting. The lighting system will be controlled by a control system that automatically switches the lights on and off while changing the colours according to the season-light schedule.

Contractors involved with the Hisingsbron bridge

The design and architecture contract for the bridge was awarded to Dissing + weitling (D+W), an architecture firm that won the design competition in collaboration with the engineering firms ELU of Sweden and Leonhardt, Andra und Partner (LAP) of Germany, in 2013.

The turnkey construction contract for the project was awarded to a joint venture (JV) of Skanska and MT Hojgaard. The contract is valued at SEK2bn ($226.9m), of which Skanska’s share is 70% while the remaining share valued at SEK591m ($67.06m) is held by MT Hojgaard.

Skansa will undertake the construction, while MT Hojgaard will be responsible for steelworks including manufacturing and installation of steel structures such as the superstructure and the pylons.

The project is expected to employ more than 250 people from Skanska during the construction.