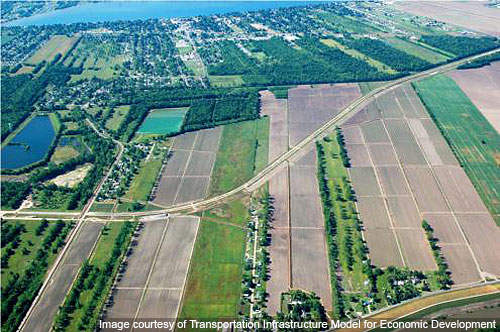 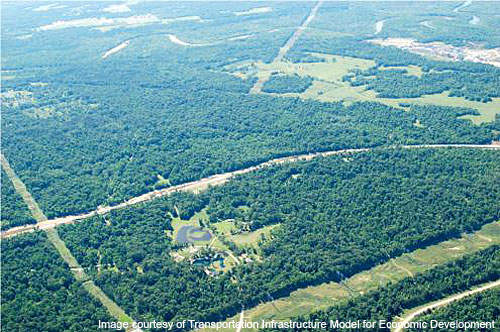 Aerial view of the work in progress. 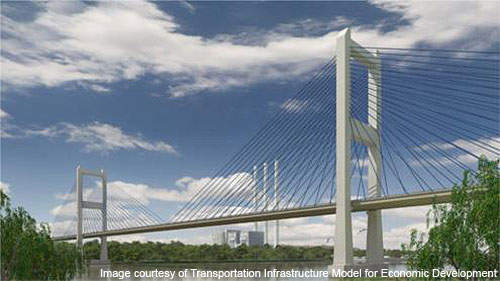 An artist's rendering of the bridge. 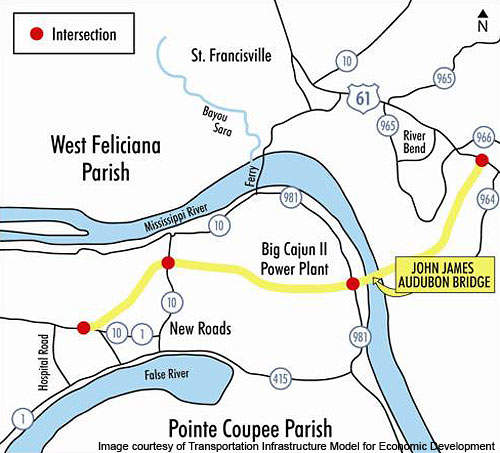 Map showing the route of the bridge in yellow. 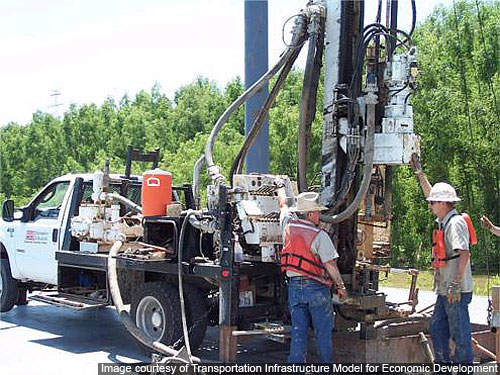 Soil borings in the Mississippi River. 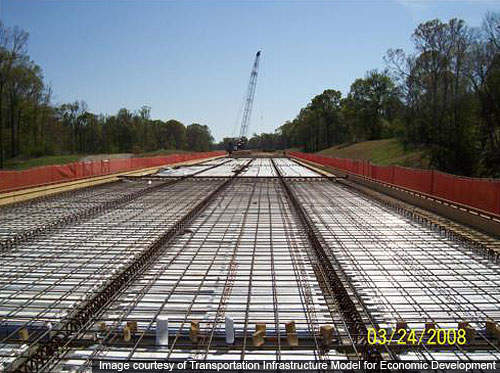 Reinforcing steel for the deck of the bridge.

The John James Audubon Bridge built over the Mississippi River in St Francisville, Louisiana (LA) is the longest cable-stayed bridge in the Western Hemisphere.

The bridge was originally scheduled to open in June 2011. However, the water level of the Mississippi river, was rising and forcing the New Roads / St Francisville ferry, which carries 720 vehicles a day, to close its operations. As a result the bridge was opened before the scheduled time in May 2011. When opened, the bridge was 92% complete, but 100% safe for traffic.

The bridge carries the traffic between Pointe Coupee and West Feliciana communities in Louisiana. It is the only bridge on the Mississippi River connecting Natchez, Mississippi and Baton Rouge.

The bridge was named in the honour of John James Audubon, a North American ornithologist.

The $409m bridge construction was planned to reduce the burden of heavy traffic on ferry crossing. The bridge has reduced the travel time of users in south-central LA. The ground breaking of the new bridge took place in May 2006.

The entire bridge project is expected to be complete by November 2011.

The project involves construction roads of 12 miles and eight approach bridges. Seven approach structures and a main structure over the river has been built. The approach bridges are supported on pre-stressed pre-cast concrete piles. The entire bridge has four lanes, approximately 2.5 miles long.

Each side of the bridge consists of low and high-level approaches supported by girders. A portion of the bridge is cable-stayed. The cable-stayed portion is made up of H-shaped pylons of 500ft and a 76ft wide composite concrete deck. The concrete deck is placed 65ft above the Mississippi River and is supported by steel edge girder beams. The girder forming system of 8,700ft² was purchased from Doka.

The project also includes four new intersections at the highways LA 1, LA 10, LA 981 (River Road) and US 61 to connect the new bridge with the highways.

The bridge design is similar to that of the Mississippi River Bridge at Luling.

“The TIMED programme includes widening of state highways and construction of some new bridges.”

The project was 92% completed as of May 2011. The construction of towers on river banks and small bridges, fabrication of expansion joints, realignment of LA 1, and east and west high-level approaches were completed in 2010.

The last two cable stays were erected in January 2011. Installation of permanent elevators in towers, and barriers and railings took place in April 2011. The final layer of concrete on the main span has also been laid down.

The quantities of reinforcing steel, structural steel and stay cables required for the bridge construction are estimated at 27.9m lbs, 14.5m lbs and 1.83m lbs respectively.

The main design contract was awarded to Audubon Bridge Constructors, a joint venture between Flatiron Constructors, Granite Construction and Parsons Transportation Group. Buckland & Taylor was awarded a design build contract. Several sub-contractors from Louisiana are working for the project.

The geotechnical engineering of drilled shaft foundations for the bridge piers were carried out by DAN Brown and Associates (DBA).

The project is part of the Transportation Infrastructure Model for Economic Development (TIMED) of Louisiana, a $5bn programme being undertaken by the Louisiana Department of Transportation and Development. Therefore it is entirely being funded by the state.

The TIMED programme includes widening of state highways and construction of new bridges among several other improvements.