The M4/M6 Kilcock to Kinnegad motorway is to be run as a toll road. 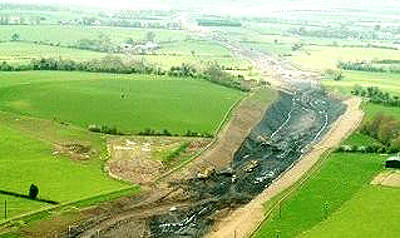 It is expected to take three years to construct The M4/M6 Kilcock to Kinnegad motorway. 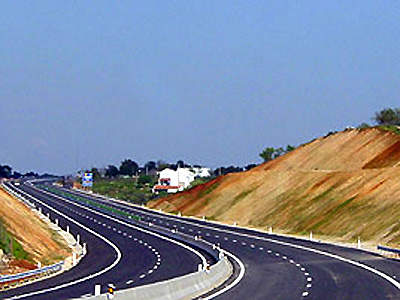 The motorway will use a classic open toll scheme, with one toll plaza at Kilcock and two toll ramps at Enfield.

The M4/M6 Kilcock to Kinnegad motorway is the first National Road Authority (NRA) public, private partnership (PPP) motorway project to be undertaken in Ireland. The road has been under consideration and planning since June 1999 when the Irish government asked the NRA to assess the suitability of the project for PPP implementation. The NRA passed the project as suitable and announced it as part of the Tranche II PPP roads programme in June 2000.

The project involved the construction of 39km of dual carriageway and 2 x 2-lane motorway from Kilcock to Kinnegad, and is an extension of the Kilcock-Maynooth-Leixlip motorway section of the N4/N6 Sligo/Galway to Dublin route; the new road bypasses the towns of Enfield, Moyvalley, Clonard and Kinnegad.

“It has been estimated that the new road will take 20 minutes off a journey between Dublin and Galway, Mayo or Sligo.”

The motorway is to be run as a toll road, which is a growing trend for new Irish roads. The project cost an estimated €275m to construct plus €47m for land acquisition, and was opened in December 2006 (ten months ahead of schedule). Construction began on the road in mid-2003.

It has been estimated that the new road will take 20 minutes off a journey between Dublin and Galway, Mayo or Sligo. Almost a year after opening (November 2007), an average of 20,000 cars per day use the road, along with 1,000 trucks.

This contract is the first of ten PPP road schemes to be delivered by the NRA as part of a national development plan (an investment in infrastructure of €52bn). Westmeath County Council, in partnership with Meath and Kildare County Councils, were responsible for the development of the project from the initial design stage, through route selection, statutory procedures and permissions and land acquisition. The work was managed on behalf of the local authorities by the Westmeath County Council National Roads Design Office.

The contract for the construction project was awarded to the Eurolink consortium in March 2003. Eurolink is comprised of SIAC Construction Ltd, an Irish construction company, and Cintra (Concesiones de Infraestrucutras de Transporte SA), a Spanish road construction company that has much experience in the construction and running of toll motorway systems (with interests in Spain, Chile, Portugal and Canada). Under the terms of the agreement Eurolink will construct the motorway and run the
concession for a period of 30 years from the date of signing (March 2003).

The road was completed ahead of schedule in December 2006 and Eurolink can now collect tolls for a period of 27 years before the concession terminates and ownership reverts to the Irish Government in 2033 (the road is designed to have a further ten-year life after this before any major structural strengthening is required).

The concession company was responsible for the design and construction of 36km of motorway and other works, including 4km of standard dual carriageway, 17km of side roads, six junctions, 34 significant structures (two underpasses, 18 over-bridges, seven under-bridges and seven river culverts), drainage networks, landscaping, accommodation works, utility diversions, communications and the toll plazas.

Westroute JV is a joint venture contractor incorporating SIAC Construction Ltd and Ferrovial Agromán that was responsible for the design and construction of the new motorway. The joint venture enables Westroute JV to combine the resources of SIAC Construction Ltd (who have extensive experience of civil engineering projects in Ireland), with resources from Ferrovial Agromán (who have worldwide experience in highway design and construction).

“The road was completed ahead of schedule in December 2006.”

Westroute JV employed several consultants with local knowledge, resources and experience of design and construction of motorway projects in Ireland.

The route continues in a westerly direction towards Cappagh Hill, passing to the south of the Cappagh GAA pitch, crossing the Ballycorron River and continuing towards the regional road between Edenderry / Johnstown Bridge and Enfield, passing to the north of Johnstown House. A full grade separated interchange has been provided to serve Enfield and Johnstown Bridge along with the Trim and Edenderry Roads and links with the Enfield relief road.

The route then continues to the south passing the railway and the Royal Canal, crossing the rivers Blackwater, Togher, Aleckafin, Glash and Boyne. The motorway crosses the regional road to Edenderry and the Kinnegad River, passing south of Kinnegad, before diverging to provide free flow connections to the N6 (Galway) and N4 (Sligo) to the west of Kinnegad. At Kinnegad, grade separated interchanges are provided on the N4 and N6 links. Overpasses and underpasses are also provided to cater
for the local traffic through the motorway.

The motorway uses a classic open toll scheme, with one toll plaza at Kilcock (nine lanes in either direction) and two toll ramps at Enfield. An Electronic Toll Collection (ETC) system was introduced from the start of the operation of the road system and this is based upon a mini transponder / subscription system. Tolls are expected to raise an estimated €16.5m per year over the lifetime of the concession. Cars will have to pay €2.60 each way, buses €3.80, and heavy goods vehicles up to €6.20 depending upon number of axles and laden weight.

“Tolls are expected to raise an estimated €16.5m per year over the lifetime of the concession.”

The tolls can be paid in cash or with a credit card. The driver can also purchase 20 trip prepayment cards and get a discount of 10% on all these journeys. Alternatively, the most efficient way to pay the toll is with the Eurolink Eirtag the company’s own electronic toll collection device or with an interoperable tag (e-toll introduced by the NRA) which can be used at all of the tolled roads and bridges across Ireland.

The new motorway was financed by Eurolink (technical consultants PM Group and Symonds) from three sources:

Eurolink was paid by the NRA a total of €146m over the period of construction as a series of milestone payments upon satisfactory inspection of the stages of construction. Eurolink will now make payments to the NRA depending upon the traffic levels on the road of a share of the toll revenues over the lifetime of the concession. They will also be responsible for paying commercial rates, corporation tax and VAT on the toll revenues obtained to the national government.