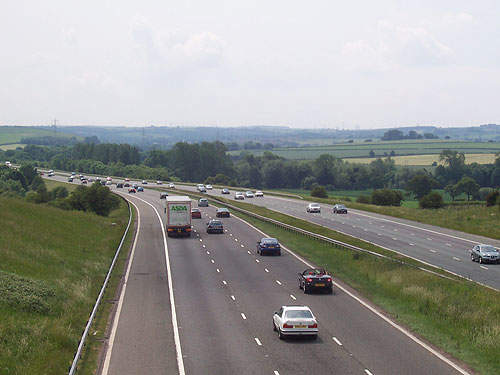 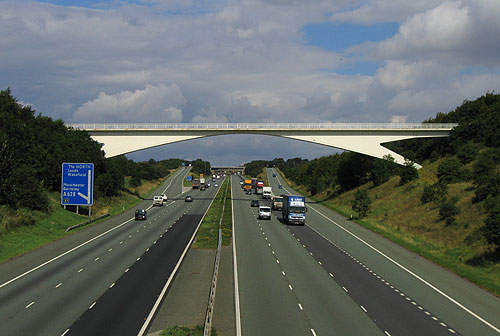 The dual three-lane motorway opened in 1959. 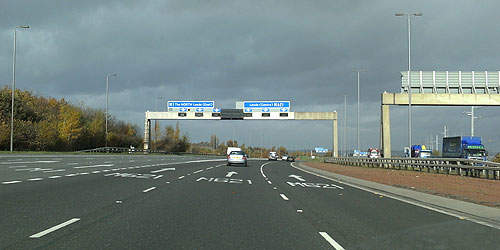 The M1 stretches 200 miles, starting in London and finishing in Hook Moor.

The M1 motorway starts in London and finishes in Hook Moor. The main cities that the 200 mile long motorway passes through are Northampton, Leicester, Nottingham, Derby, Sheffield, Wakefield and Leeds. The M1, which has been called the first ‘inter-urban’ road in the UK, meets the M25, the M62 and the A38.

A number of improvements have been carried out since the opening of the motorway in 1959.

Sir Owen Williams and Partners were assigned the survey and design of the M1. They undertook these tasks from London to Doncaster, covering a length of approximately 150 miles.

The M1 was built as a dual three-lane motorway.

Initially work was done on a 53.5 mile stretch from Slip End to Crick that included the M45. John Laing & Son was awarded a £15m contract for the entire work on 20 January 1958. The construction work began on 1 April 1958. Laing sub-contracted the whole of the surfacing and part of the structural work.

Hard shoulders were constructed using a mixture of gravel, sand and loam. These eight feet wide lanes were built to Ministry of Transport specifications.

“The motorway is 200 miles long, passing through seven major cities.”

In the early days, a wooden barrier consisting of timber beams served as a guard rail on the M1. The now ubiquitous blue motorway signs were used for the first time on a large scale on the M1. The service area in Watford Gap was another first for the industry; it opened simultaneously with the M1.

The first section of the M1 motorway opened in December 1959.

The road was originally designed to bear a load of 14,000 vehicles per day. In the years that followed the completion of the M1, numerous upgrades and changes were made. The hard shoulder has since been widened to the point where it can actually serve the purpose for which it was built.

Some of the projects undertaken on the M1 since 2004 are given below:

Balfour Beatty was awarded the contract for the A421 road scheme connecting the M1 and Bedford on 4 November 2005. Work began in October 2008 and the new 13km dual carriageway was opened on 1 December 2010. The Highways Agency provided more than £200m for the project. As part of this scheme, the M1’s junction 13 was redesigned.

“The M1 was the first motorway to feature the now ubiquitous blue signs.”

In 2008 Balfour Beatty, in a joint venture with Skanska, completed the M1 junction 6a to 10 widening project under the Early Contractor Involvement scheme.

MVM, a joint venture of Morgan Sindall, VINCI Construction Grands Projets and Sir Robert McAlpine, is working on widening the 23km long three-lane road between M1 junctions 25 and 28 to four lanes. The project is estimated to cost £340m. The existing hard shoulder will be converted into a fourth lane and new hard shoulders will be built at feasible locations.

The M1 is operating much over its capacity, which has recently led to tailbacks at rush hour. Work on junctions 10 to 13 would ease the traffic woes of drivers and passengers. In January 2009, the then secretary of state announced that the Hard Shoulder Running (HSR) scheme would be introduced at those junctions linking Luton and Milton Keynes. The scheme has, among other things, made it possible to have reliable journey times.

Plans to widen the road between the junctions were officially cancelled in March 2010. The HSR scheme was implemented on the existing stretch; work began in February 2011 and is expected to be completed by 2013.

The future of the M1

Junctions 28-31, 32-35a and 39-42 will become managed motorways. The M1 / M6 junction 19 improvement scheme will be prepared for start of construction in future spending review periods.