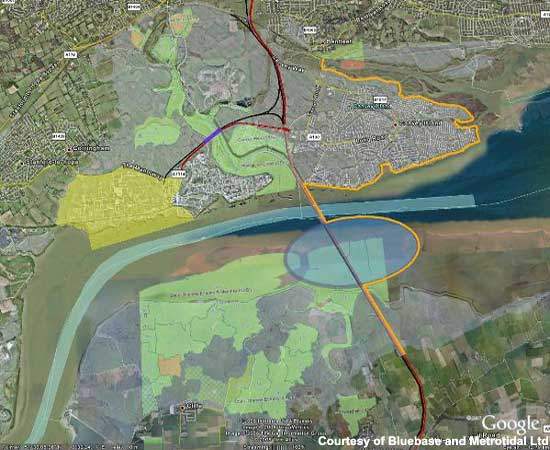 The new Medway-Canvey Island crossing is still at the design stage, but a proposal has been made to the DfT and the EA.

Canvey Island will be central to the whole scheme which could include a tidal power station and a further tidal barrier.

The Thames Estuary has always been a natural barrier between Kent and Essex. 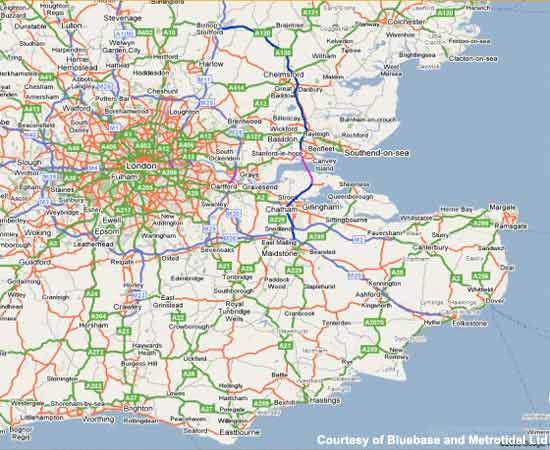 The Department for Transport and the Environment Agency are investigating proposals for a project to link Medway and Canvey Island.

The rail tunnel part of the proposed Medway-Canvey Island project will carry a line to link with the Crossrail project in London. 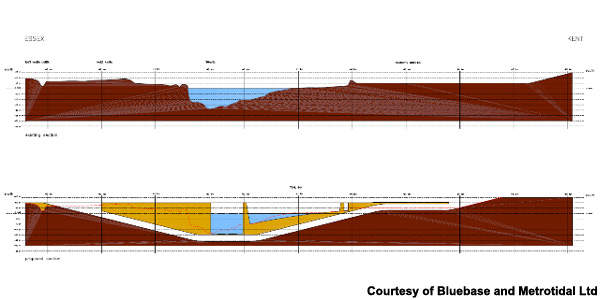 The Medway-Canvey Island tunnel will be laid in a trench dredged across the bed of the Thames Estuary.

The Medway-Canvey Island crossing is the newest scheme proposed to provide a road and rail link that will integrate the Thames gateway transportation infrastructure. The entire scheme will consist of a road tunnel linking Canvey Island in Essex with the Medway towns across the Thames Estuary on the South bank (Hoo Peninsular in Kent). In addition, there would be a rail link that would link the Thames Gateway network with the Crossrail proposal for London.

The scheme would also incorporate a surge tidal barrier, reclaimed land off Canvey Island to create a lagoon and a tidal power plant. The scheme is being championed by a consortium headed by Metrotidal Ltd, which has already submitted preliminary plans to Department for Transport and the Environment Agency for the scheme.

“Studies have indicated that the new 7.6km crossing would ease congestion on the M25 at the Dartford Crossing.”

Realisation of the project may not be until around 2012–13.

There is some opposition among local politicians on Canvey Island, despite the expected benefits of the scheme to the environment and the local economy as well as the integration of the transport system and congestion relief.

Studies conducted by Metrotidal Ltd have indicated that the new 7.6km crossing would ease congestion on the M25 at the Dartford Crossing. Other indications are that this scheme would support growth of the housing market in the Thames Gateway area.

Mark Willingale, director of Metrotide, commented: “The proposal integrates three elements: a road and rail tunnel link under the Thames, new flood defences to cope with rising sea levels expected within the next century and a tidal power plant. The new road and rail services will serve the heavy freight traffic likely to be generated by the new deep-sea port planned at Shellhaven in Thurrock. We propose to fund the tunnel by combining the emerging Government flood defence budget with wholly private-sector funding for the tunnel and tidal power plant.

“A new road connection from the A130 and A13 in Essex to the A289 and M2 in Kent will create a new road orbital system for the whole Thames Gateway region. Similarly, a new twin-track rail connection from Wickford and Pitsea in Essex to Rochester and Ebbsfleet in Kent will create a new rail orbital for the Thames Gateway that links the eastern limbs of Cross Rail and will give Canvey Island its own railway station for the first time and a third road access off the island.

“The [Environment Agency] people are working on flood problems, the DfT is looking at [the] Dartford [tunnel], we’re saying why not put these together.”

Parties interested in the scheme include Kent County Council, Essex County Council, Thames Gateway South Essex Partnership, Department for Transport (who have appointed Parsons Brinckerhoff to look into proposals for a new crossing), the Environment Agency and the UK Government. Essex and Kent councils have recently commissioned a £100,000 study into a new lower Thames crossing.

“Metrotidal Ltd believes that the capital cost of the plan will be £2–4bn.”

Essex County Council leader, Lord Hanningfield, commented: “I have a feeling this is not the sort of project which Essex and Kent county councils will be looking at for a lower Thames crossing… A tunnel from Canvey to the Medway towns would be extremely expensive and I think it would not be acceptable, although our study will be looking at all the available options.”

Metrotidal Ltd believes that the capital cost of the plan will be £2–4bn, with the tunnelling part of the project thought to cost around £1bn. The tunnel is expected to be formed from concrete tubes immersed in the bed of the estuary along a trench dredged across the Thames.

There would also be an area of reclaimed land off Canvey Island and a lagoon on the Kent side of the river with a flood barrier constructed between the two; this would require four concrete caissons to form a ‘throttle’ for the flood barrier to reduce tidal range upstream.

The proposed tidal power plant could potentially provide enough power for a new eco town or provide power for an electric rail service through the rail tunnel. The consortium developing the project includes architects Bluebase, Capita Symonds and EC Harris, as well as Metrotidal Ltd.

The road and rail tunnels across the estuary would be constructed from concrete tubes laid in the bed of the river. Capita Symonds already has experience of this type of work, having gained experience from the Oresund crossing between Denmark and Sweden.

The 150m-long tunnel elements would be constructed on a site/staging area/dry dock in southwest Canvey Island that would be reclaimed from the sea in an initial £110m development. The idea was that this could, when the project was completed, be used to build the new Canvey Island railway station, thereby giving a direct link to London via the Thames Gateway rail network.

“There is some opposition to the scheme among local politicians on Canvey Island.”

Willingale commented: “We would propose to use the reclaimed land which adjoins the south west Canvey regeneration area, initially as a dry dock where the concrete tubes for the tunnel would be constructed… After this work has been carried out the land could revert to being part of the estuary or it could be used for development. It would seem a great shame if having reclaimed the land for the dry dock it was then left to become sea again.

“Obviously, it could be an ideal place for a new station to serve Canvey on the rail link and for commercial development… We have put a value of £110m on this site for reclamation but I would think that could be low compared to the true value when the whole scheme comes into operation.”