Assembly and Installation of Under Structures for Bridges 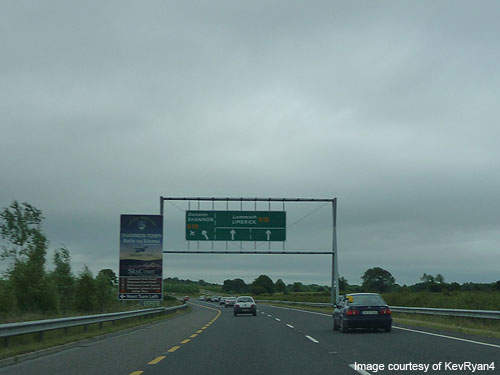 The N18 is being upgraded under the Atlantic Corridor Letterkenny to Waterford improvement programme. 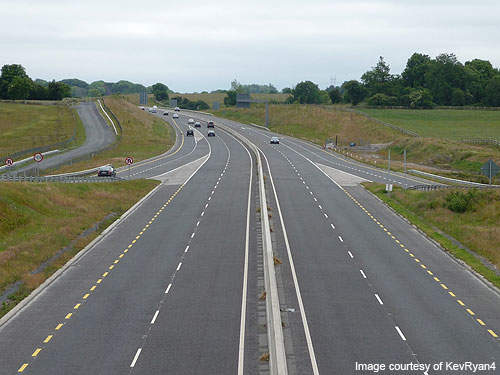 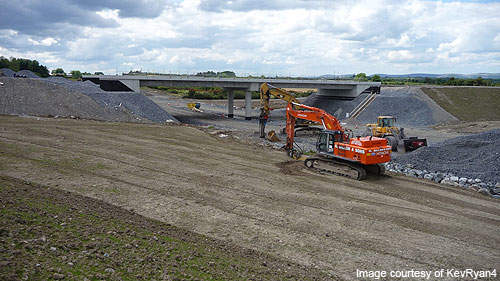 The Gort to Crusheen section under construction in June 2009.

The N18 is a 100km-long national road in Ireland starting from Claregalway, passing through Ennis and Shannon and terminating in Limerick. Under the National Development Plan and the Transport 21 programme, the Irish Government is upgrading the N18 into a dual carriageway. The Transport 21 programme represents the largest investment made by Ireland to improve the country’s transportation infrastructure including national roads, rail, bus and airports.

The N18 upgrade is included in the Atlantic Corridor Letterkenny to Waterford improvement programme. The schemes in the programme include the 14km Ennis Bypass, the 28km-long Oranmore to Gort section and the 22km-long Gort to Crusheen section.

The N18 Oranmore to Gort section was combined with M17 Galway to Tuam section and N17 Tuam bypass section and was made into a single section of 57km long, known as the N17/N18 Gort to Tuam PPP Scheme (the N17/N18 Project). Construction of this four-lane motorway started in May 2014 and is expected to be complete in 2018.

The Ennis Bypass includes 14km of dual carriageway and 6km of the N85 Western Relief Road. Construction of bypasses at Ennis and Clarecastle and a total of 16 new structures, including three river and three railway crossings, were part of the scheme. An interchange at the N18/N85 junction was also built.

The N18 Oranmore to Gort scheme (28km) has been combined with the N17/N18 Gort to Tuam scheme, which includes the M17 Galway to Tuam scheme (25km). The combined scheme will include 53km of motorway and the 4km Tuam Bypass.

The Gort to Tuam section will start from Gort in the south and end at Tuam in the north. It will connect to the M6 motorway west of Oranmore, as well as replace the existing N17/N18 roads, and reduce journey times from Gort to Tuam by around 20min. This section of the project received final approval from the Irish Government in March 2013 and is expected to create 450 jobs.

The Gort to Crusheen scheme consists of a 22km dual carriageway starting from Ballinger’s Corner to Cragard where it connects with the 21km Ennis Bypass. The project also includes 10km of realigned local roads and 12km of accommodation access tracks.

Construction details of the N17/18 section

The N17/N18 Gort to Tuam scheme will include the construction of three interchanges at Rathmorrissy, Kiltiernan and Gort. Two bridges over the Clarinbridge and Dunkellin Rivers, 19 road bridges and one railway bridge will be built. Four accommodation bridges and underpasses are also part of the project. Approximately 240ha of land is expected to be required for the project.

The Gort to Crusheen scheme included the construction of 14 new bridges, a grade-separated junction and an at-grade roundabout junction.

The construction of €550m Gort to Tuam motorway, which was halted in 2010 due to funding issues, was resumed in May 2014.

The National Roads Authority has provided €500,000 for the funding of the N18 project. Further, a seed capital of €20m has been provided by the authority for the Gort to Tuam motorway.

The European Investment Bank will provide €144m, while additional funding will be provided by the Bank of Ireland, Natixis partnering with the Ageas Group and Sociéte Générale.

In April 2014, Marguerite Fund announced financial closure for the project in which it has a 50% shareholding, along with John Sisk and Son (Holdings), Lagan Projects Investments, Roadbridge, Strabag SE, and HICL Infrastructure Company.

In September 2010, a consortium of BAM Balfour Beatty was awarded a £250m contract for constructing the M17/M18 Gort to Tuam scheme.

Gama Strabag Construction, a joint venture between Gama Turkey and Strabag, was awarded a €119m contract for the construction of the Ennis Bypass. TMS Consultancy was contracted to carry out road safety audits. Jacobs Babite Consulting Engineers were appointed as the engineer.

Gama Strabag subcontracted Mott MacDonald Pettit to carry out the design work for the project. Pipeline and Drainage Systems was subcontracted to build a 300m hydro deck drainage system.

A consortium consisting of Tobin Consulting Engineers, Hyder Consulting and PH McCarthy & Partners was awarded a €220m contract to carry out the preliminary design and environmental assessment for the N18 Oranmore to Gort scheme. Eachtra Archaeological Projects provided archaeological services for the project.

The €92m design-build contracts for the Gort to Crusheen section was awarded to Wills Brothers and SIAC Wills JV in November 2008.

Bardon Composite Pavements, a division of Aggregate Industries, was responsible for placing 94,000 cubic yards of cement bound granular materials (CBGM) base for the Gort to Crusheen section. In 2012, INIS Environmental was contracted to carry out the environmental impact assessment (EIA) study of the Gort to Tuam motorway project.

Construction of the Gort to Tuam motorway project is being executed by Direct Route, a joint venture comprising John Sisk and Son (Holdings), Lagan Construction Group, Roadbridge and Strabag. Maintenance of the road for a period of 25 years has been assigned to a joint venture of Lagan Operations and Maintenance and A-Way Infrastructure Project Development and Operations (Strabag).